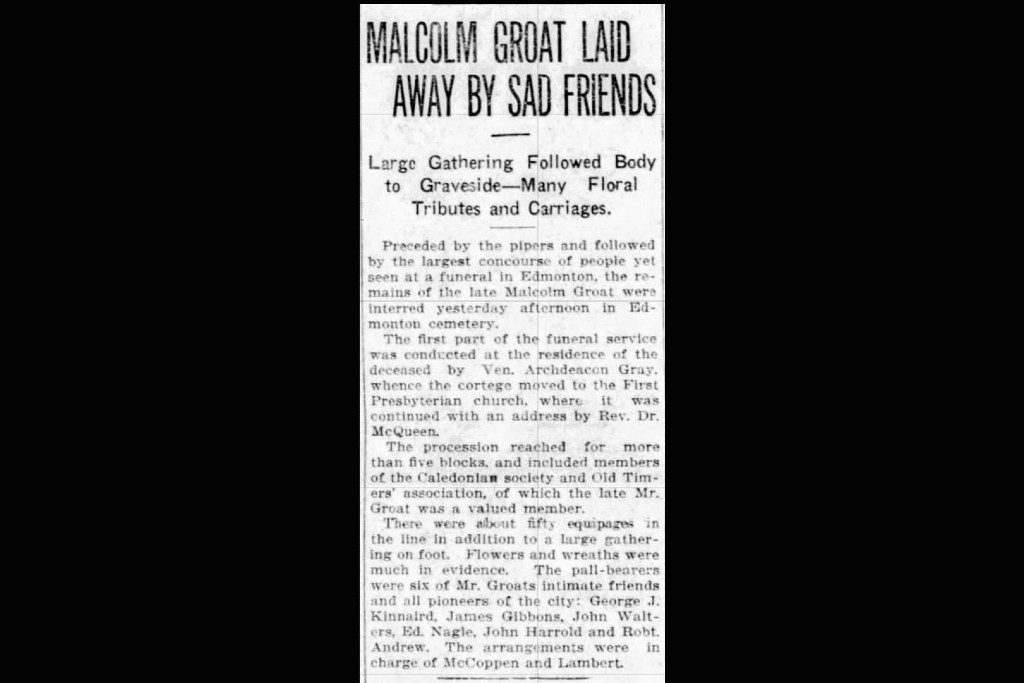 On this day in 1912, many in the city marked the passing of Malcolm Groat, one of Edmonton's first homesteaders. "Flowers and wreaths were much in evidence" during Groat's funeral, which saw a procession of more than 50 carriages.

Groat was born in Scotland. In 1861, at the age of 25, he signed up with the Hudson's Bay Company and was assigned to Fort Edmonton. At the time, the fort was a vital part of the company's trading network, both growing and distributing food to other outposts. Groat oversaw much of the agricultural work as well as other jobs during his 17 years with the company.

The Hudson's Bay Company surrendered most of the land that it controlled to the Dominion of Canada in 1870, which opened up much of it to colonial settlement. Groat was one of the first to stake out a claim along the Edmonton river valley — 900 acres, stretching from what is now 121st Street to 149th Street, from the river valley to about where 111th Avenue currently runs. Groat and his family farmed on the land for years and used it for breeding horses. The unfarmed areas also became a popular stopping point for gold seekers and explorers to check their gear before heading further north. Groat became an active member of the community, serving on Edmonton's first school board, wrote Lori Yanish and Shirley Lowe in West Side Story, their 1991 book on the history of Edmonton's west end.

By the early 1900s, Edmonton had grown from a settlement into a city, and land was in demand. Groat sold much of his estate to James Carruthers in 1906. The land was subdivided and homes were built on it, eventually becoming the Glenora and Groat Estates neighbourhoods, the latter becoming part of Westmount. Carruthers decreed that the homes on Groat's former land would be "either detached or semi-detached" and cost a minimum sum to build. He also pushed to have Edmonton's streetcar network expanded to the new neighbourhoods, a deal he secured by promising to pay for a steel bridge over a ravine. The 102nd Avenue bridge still spans the ravine, which has since become Groat Road.

In 1913, Government House, the lieutenant governor's official residence, was built overlooking the river just south of Glenora, further cementing it as a desirable neighbourhood for Edmonton's wealthy residents. It's kept that reputation over the past century, maintaining large lots, green spaces and pre-WWI architecture. Many of those homes are at the centre of the city's growing luxury home market. Over the past year, more than 40 homes have been sold for more than $1 million.