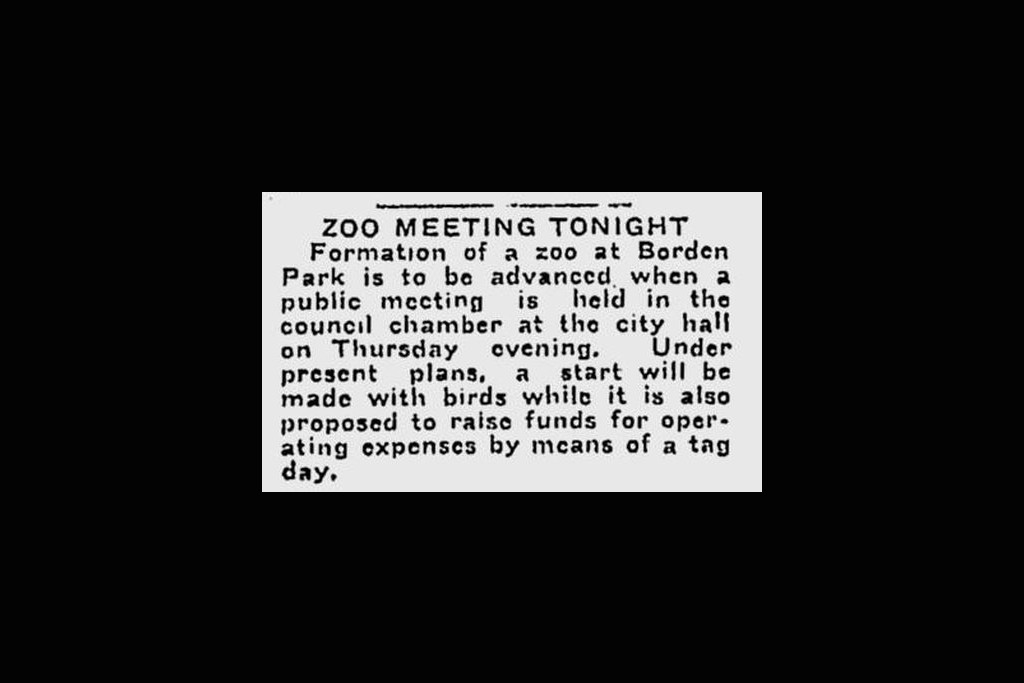 On this day in 1926, plans were being made to build a zoo in Borden Park.

The modest initial plan for the zoo laid out that "a start would be made with birds" while funds were raised for more elaborate exhibits. Borden Park seemed like a natural place for Edmonton's first zoo; at the time, it was the city's largest and most popular park.

The city established East End Park in 1906, carving out 140 acres of swampy land on the edge of the city's limits. The park got its current name in 1914 after a visit to the city from then Prime Minister Robert Borden. By the 1920s, Borden Park had become a popular recreation spot for Edmontonians, boasting a midway with rides and games. It even included a wooden rollercoaster dubbed "The Green Rattler" and a beloved Old Mill ride (better known now as the Tunnel of Love). Borden Park was the site of one of Edmonton's first outdoor pools and, eventually, the city's first zoo (which had more than just birds). On a sunny Sunday in the summer, the park could draw up to 7,000 people.

By the 1930s, visits to Borden Park started to decline. The Old Mill had burnt down years before and the Great Depression meant families had less money for outings. The Green Rattler closed down in 1935. The Edmonton Zoo fared better, surviving for a couple more decades before being torn down in the late 1950s to make way for an expansion of Northlands, with the current Valley Zoo built as a replacement.

While Borden Park might not be the amusement park hotspot it used to be, it is still a treasured green space in the city. Recent revitalization efforts have led to the park being home to dozens of sculptures as well as a natural swimming pool, the first chemical-free outdoor pool in Canada. Borden Park might also be slated for expansion as part of the city's plan to redevelop the area around Northlands and the old arena.