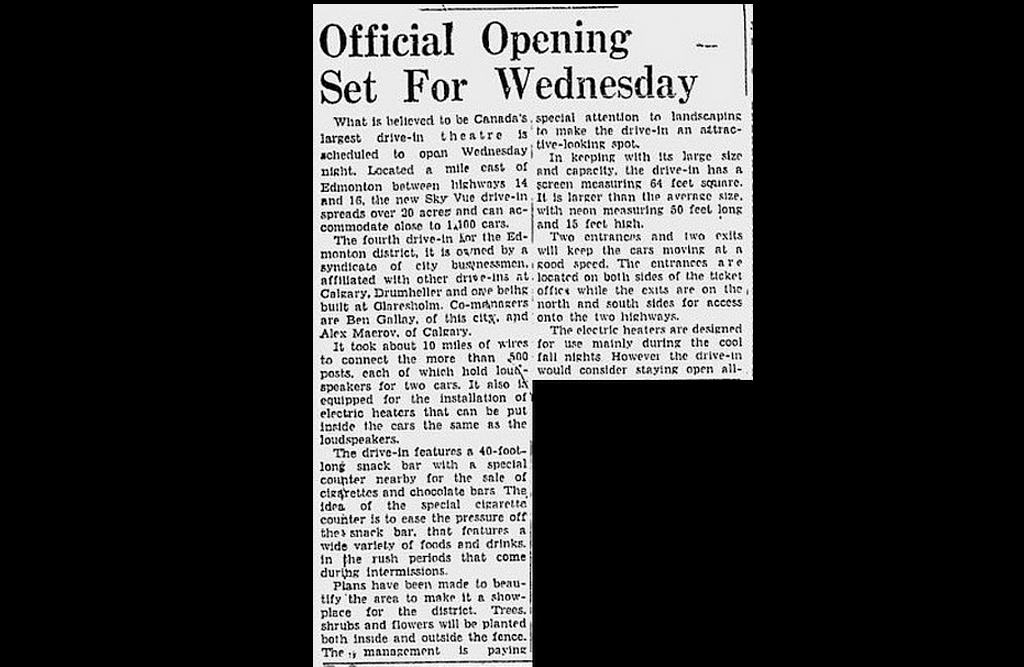 On this day in 1953, the screen at the Sky Vue Drive-In theatre flickered to life for the first time.

The Sky Vue sat on 20 acres of land east of 50th Street, just outside the city limits at the time. The new theatre was thought to be the biggest in Canada, according to the Edmonton Journal. With a single, 64-foot screen, the Sky Vue had a total capacity of 1,100 cars. The paper also notes that a 40-foot snack bar was built to offer drinks, popcorn and cigarettes.

The massive venue was a testament to Edmonton's love of drive-in theatres. The city's first outdoor screen opened in 1949. By 1953, Sky Vue was the fourth to open near the city limits. Continuing into the 1970s, Edmonton likely had more of the theatres than anywhere else in North America, according to history writer Lawrence Herzog.

In November 1975, Sky Vue had its final showing before closing down. That fate was shared by most of Edmonton's drive-ins over the next decade because the city was expanding and soon suburbs took over the land. Edmonton's last theatre, the Twin Drive-in, shut down in 1997.

Despite the avalanche of streaming options available to modern movie enthusiasts, the old drive-in theatres still hold an intoxicating sense of nostalgia. In recent years, Edmonton has seen attempts at drive-in revivals and the COVID-19 pandemic has also led to a return of drive-in events. In the past year, there's been drive-in operas, drive-in graduation ceremonies and drive-in movies. In June, Motor Nights hosted a series of drive-in revival showings over three weekends, while the Stollery Children's Hospital showed a collection of kid's flicks at the Edmonton Expo Centre.