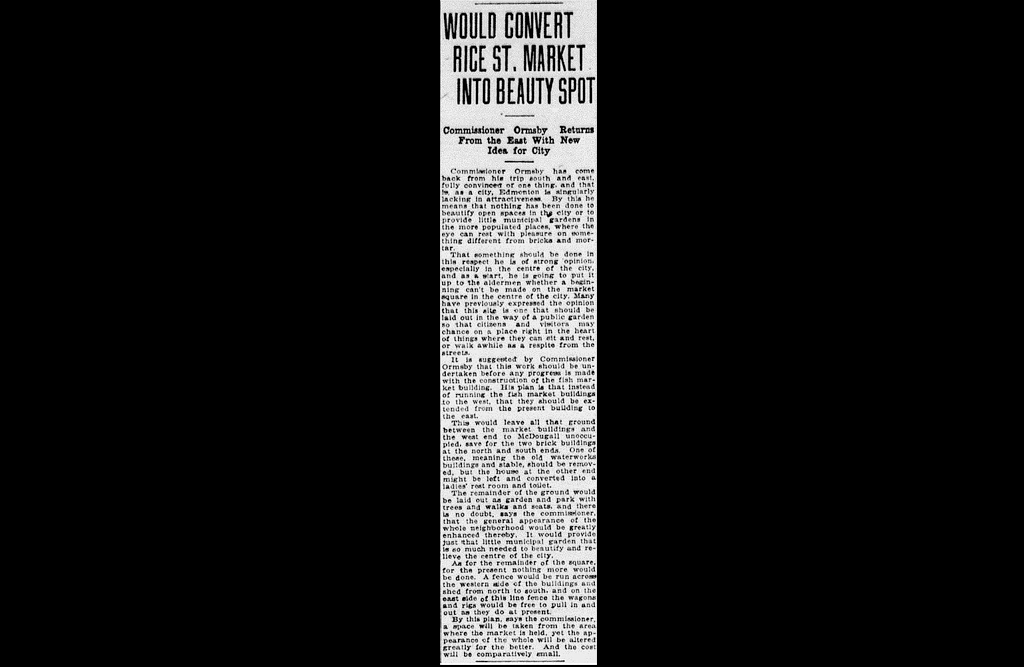 On this day in 1919, the city commissioner suggested turning part of the Rice Street Fish Market into public gardens.

Commissioner Arthur Ormsby became enamoured with the idea after travelling to other cities. He returned "fully convinced of one thing, and that is, as a city, Edmonton is singularly lacking in attractiveness." Edmonton was built of brick and stone, with little in the way of beauty "where the eye can rest with pleasure" according to newspaper accounts.

Ormsby wanted to see a public garden in the middle of the city that would stretch from around the current Churchill Square west to the edge of McDougall. The plan would mean taking some room from the Rice Street Market — at the time, Market Square stood where Stanley Milner is now, but it was in the process of expanding westward.

Ormsby's garden plan wasn't approved, potentially because the market was an important part of early Edmonton. The town's council established the market in 1903, at a time when Edmonton's population was around 8,000. Every Saturday, the market would draw crowds, both local and from outlying farms, to the square to shop and socialize. It served as an important civic glue to bind together the people of the fledgling city.

Later, it would be given a new name — City Market (Rice Street itself would eventually merge with Howard Avenue to become Rice Howard Way.) The market continued to be a weekend tradition in that spot for Edmontonians through the Great Depression and two world wars. In the 1960s, the market moved to a building on 97th Street so that the downtown library could be built. In 2004, it moved again to 104th Street, becoming known as the Edmonton Downtown Farmers' Market.

In keeping with its pattern of relocating, the market moved again due to LRT construction along 102nd Ave. The latest move saw it return to 97th Street in 2019, with space for around 100 vendors in the historic GWG Building.

The celebration of the market's reopening was short-lived, however. A few months later, the COVID-19 pandemic caused it, and other markets around the city, to shut down. Most of the markets were able to reopen during the spring of 2020, but restrictions took away some of the unique aspects that have drawn Edmontonians for more than a century — like smaller crowds, no pets and no samples.

Now that vaccinations rates are up and COVID-19 cases are down, markets in the area are looking a lot more like they did in the past. Still, the pandemic has taken a toll on both the markets and the individual vendors who participate. In response to these difficulties, the provincial government recently announced a new food labelling program to bring greater awareness to Alberta-made goods and produce.