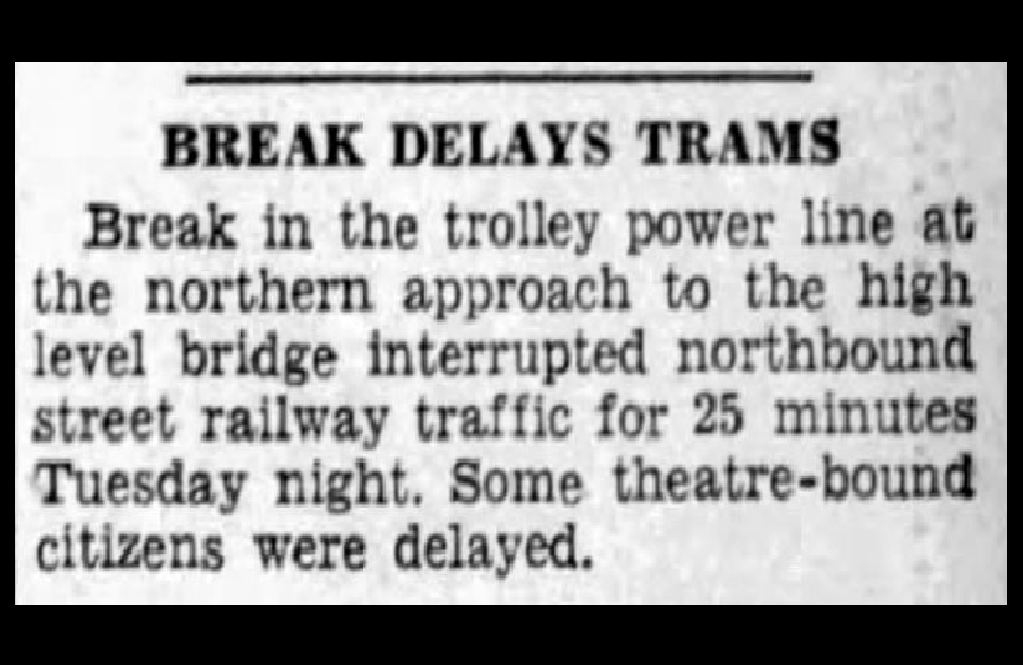 On this day in 1942, a broken trolley line kept some theatre-goers stuck on the south side of the river.

The 25-minute delay was a minor hiccup for a rail system that transported millions of people around the city each year. Edmonton's streetcar system got its start in 1907 when city council approved $224,000 to build the initial track. One year later, the Edmonton Radial Railway (ERR) was up and running, with four trolleys along 21 kilometres of track.

The service was instantly popular — by 1912, the ERR had to purchase nearly 50 new cars to help carry 10 million riders that year.

As the city expanded, so did the trolley system. By 1929, the radial railway boasted six colour-coded lines that ran from 142nd Street to 80th Street and stretched from Calder to McKernan. More than 14 million passengers rode the railway that year — quite the ridership for a city that had yet to crack 80,000 residents.

In some ways, the streetcar was a victim of its own popularity. It's hard to say exactly how many people were using the system during the 1940s, as city data grouped streetcar and bus riders together. But ridership certainly increased, putting more strain on the infrastructure. Maintaining the system had become difficult during the Depression years, a problem that was exacerbated by the Second World War. The cost of replacing aging tracks and trolleys was deemed too much and the streetcar lines were gradually replaced by motorized busses. On Sept. 1, 1951, Edmonton 1 — one of the first trams ever purchased by the city — powered across the High Level Bridge for the railway system's last trip.

But the tracks didn't lay unused forever. While no longer part of the public transit system, some of the historic streetcars have been restored by the Edmonton Radial Railway Society. The group has collected nearly 20 vintage streetcars from Edmonton and around the world (including Edmonton 1).

The society operates some of its historic streetcars for trips across the High Level Bridge, with stops in Old Strathcona and downtown. The popular service was paused last year because of COVID-19 but started up again earlier this summer with new pandemic precautions. Labour Day saw the beginning of the streetcar's fall schedule, which will run until Thanksgiving before retiring for the winter.