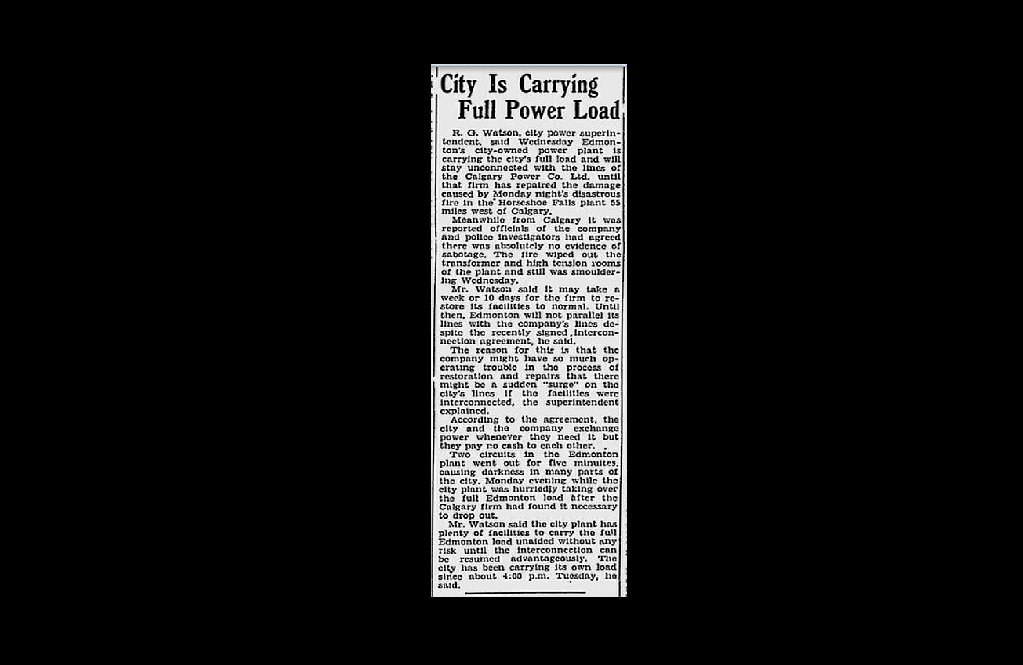 On this day in 1940, the city's lone power plant was working hard to kick into high gear after being cut off from Calgary.

The Edmonton power plant was forced to take the full load of the city's electrical needs due to a fire that damaged the lines connecting Alberta's two largest cities. While the story doesn't provide a name, the Rossdale Power Plant was the only facility in the city at the time.

The history of Edmonton is connected to the Rossdale Power Plant, but the history of the land the plant sits on extends far further. The area served as a gathering place for Indigenous groups for thousands of years, providing a spot for trade, ceremonies and other activities. When settlers first came to the area, that is where initial meetings between Indigenous people and the new arrivals happened.

Around the turn of the 20th century, Rossdale became a hub for the utilities that a growing city demanded. The Edmonton Electric Lighting and Power Company started generating power from coal on the site in 1891. When the municipal government took over the power plant in 1902, it became the first municipally-owned electrical company in Canada. Within 10 years, a water treatment facility and an incinerator were also built on the flats.

In the 1930s, Edmonton needed more electricity. The first building of what is now called the Rossdale Power Plant was designed and constructed by Maxwell Dewar in 1931, who would later go on to become the city's chief architect. The brick-and-steel building , with its high windows and massive smokestacks, was built in a style characteristic of American factories during the period. It was joined by the Pumphouse No. 1 in 1937, which at the time housed what was the most advanced power generation equipment in the country.

In 2001, the province recognized its important place in Edmonton's past by designating it a provincial historical resource. While that protected the existing building, it also meant that further expansion was unlikely. Decommissioning of the plant began in 2008 and finished four years later.

Since then, the future of the Rossdale Power Plant has been in question. Earlier this summer, the City of Edmonton released its preliminary designs for development along the north side of the river, including the Rossdale Power Plant. The plan includes new walking spaces, a riverside platform and the potential for some commercial spaces. The city is currently seeking public input for the plan and the future of the site.