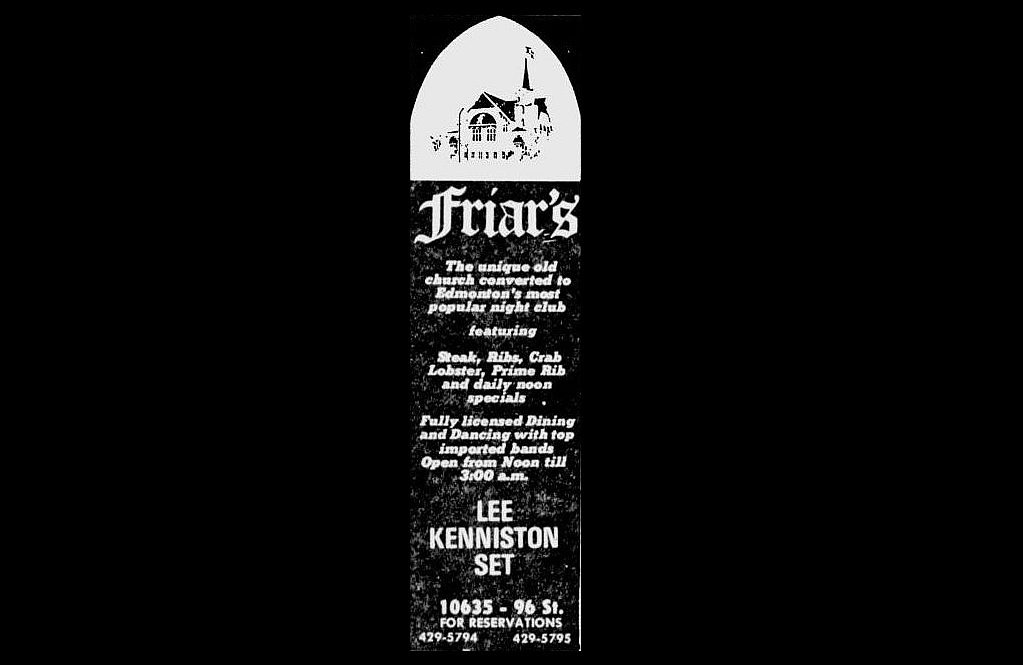 On this day in 1974, one of Edmonton's oldest churches was seeking a new congregation after being turned into a nightclub.

The 1974 version of a nightclub might be a bit different from what we're used to in 2021, with Friar's boasting dancing, dinner, and a show by the Lee Kenniston Set lounge band.

The impressive brick building that housed the church and then a nightclub has been on 96th Street for more than a century. In its early days, the church served as a vital part of the community for Edmonton's growing German community.

German-speaking residents were rare in Edmonton's early days as a town, with the 1885 census counting only about a dozen people of German origin in the area. As railways grew and transportation became easier, more arrived and by the turn of the century, German-speaking arrivals from Germany, Russia, Austria, and the United States began to settle in and around the city.

The First German Baptist Church was founded in 1900 - the building was quite small, with room for only about 50 people. That proved to be inadequate for a growing community, and it was expanded twice over the next decade. Eventually, the building was sold and a new, larger church was built in the same location.

The church served as a gathering spot for the city's German-speaking community for decades. Shortly after the Second World War began, the church changed its name to Central Baptist and began offering English-language services.

In the 1960s, most of the church's congregation began to move to Edmonton's rapidly expanding suburbs. In 1967, the Central Baptist followed, moving to the south side. The building that had once been the centre of the community sat empty for awhile, before being converted into a steakhouse and eventually Friar's nightclub. By the end of the 1970s, Friar's became a popular disco spot in the city.

However, the nightclub eventually shutdown and the building was abandoned until 1993 when a new owner returned it to its religious roots. It became the Mustard Seed Church, a Christian non-profit that provides support services to unhoused and vulnerable people. Since then, it has provided food, clothing and emergency shelter for Edmonton's unhoused, and has been a partner in the city's plan to eradicate homelessness. As temperatures drop this fall, the Mustard Seed recently put the call out for donations of cold-weather clothing, as well as hygiene products.