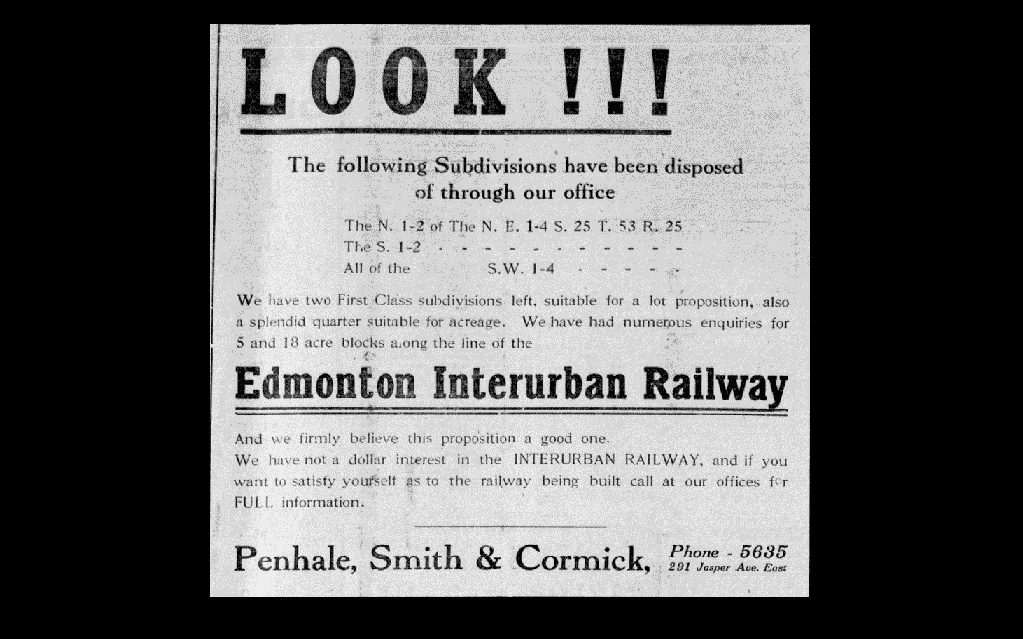 On this day in 1912, real estate firms were throwing their support behind a rail line connecting Edmonton to St. Albert.

The ad drops some not-so-subtle hints that potential land buyers should hurry, as the company claims it has received "numerous enquiries" about plots along the Edmonton Interurban Railway — even though the railway didn't actually exist yet.

The early 20th century was a time of explosive growth for Edmonton. It had a population of 8,350 in 1904 when it graduated to city status. A decade later, it had ballooned to 72,516 residents. As the population swelled, so did the city's borders. However, poor transportation made it difficult for those on the outskirts to reach other parts of the city, and for those in the centre to find relief from the blocks of roads and buildings.

A rail connection to St. Albert was seen as a solution to those woes. In 1912, the main road connecting the two communities was a muddy mess, often unusable in wet weather. But if a reliable rail link was established between Edmonton and St. Albert, it would allow new arrivals to choose where to live and encourage development along the entire line. Discussion of the urban railway had gone on for years, but it was Raymond Brutinel who would actually build it. The wealthy financier came to Canada in 1905 after deserting the French army. Once in Alberta, Brutinel made a small fortune investing in coal mines and setting up electric streetlights in St. Albert.

In 1910, Brutinel formed a company to build the all-electric railway connecting the two areas. The line was meant to be the first step in a railway that would connect Edmonton to Tofield, Pigeon Lake, and Namao. Construction began two years later and was finished the year after. By that time, the Edmonton Interurban Railway couldn't afford to run only on electricity. Instead, it bought two hybrid gas-electric train cars, an uncommon vehicle.

By December 1913, the line started running with one car (the other was on its way from England, but would never actually see service on the line). The 45-minute journey from St. Albert to Edmonton had five stops, including at Summerland, a proposed subdivision north of Calder. The Edmonton terminus was at 124th Street, where passengers could then transfer to the Edmonton Radial Railway to reach other parts of the city.

Fate almost immediately turned against the Interurban Railway. Its single car, while quite comfortable, broke down often; the wait times to transfer between railways were long and frustrating; and the economy slowed. The final spike in the railway's coffin came when a fire in 1914 destroyed its train barn and the railway's only operating car. While there was some talk of rebuilding, the ambitious dream was dead less than a year after the railway opened. Brutinel went on to form a machine gun company for the British army and returned to France to join the war effort in 1915.

Over the decades, St. Albert and Edmonton have both continued to grow. No longer attached by just a single muddy road, the two cities are far more closely connected than a century ago. The question of a rail link between the two remains an open question and Edmonton city council has approved a proposed route that would bring the LRT right up to St. Albert's borders. And both cities, like much of the province, are going through a housing construction boom that once again brings up questions of how they will continue to grow in the future.