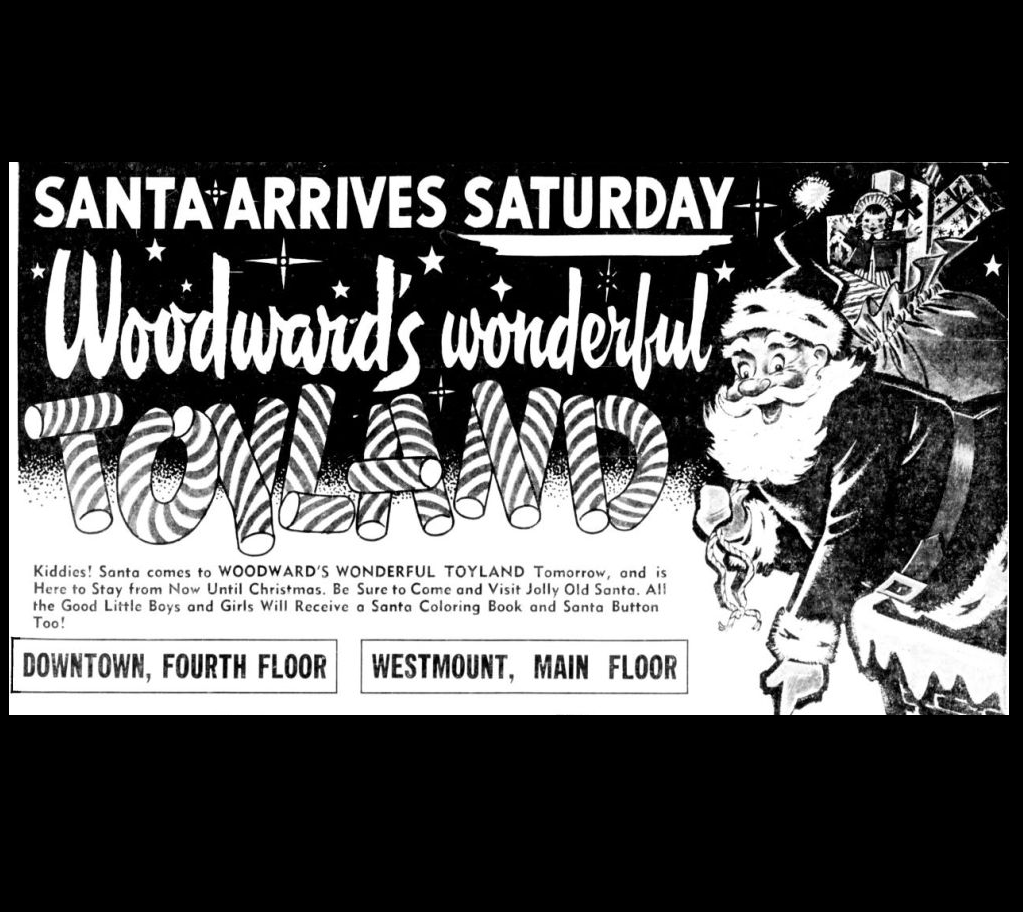 On this day in 1960, two Edmonton department stores were advertising visits from Santa Claus at the same time.

The Westmount Woodward's claimed that St. Nick would stop by on the next Saturday afternoon, while the Simpsons-Sears near Woodcroft claimed to have Kringle booked, too. Of course, as adults, we know the truth — at least one of them must have actually been one of Santa's helpers. (Extra points to the Santa who showed up in a helicopter, though.)

One could argue that the city's relationship with the department store started at its founding. Fort Edmonton was originally established as a fur trading post for the Hudson Bay Company. HBC would also open the city's first department store downtown in 1904. As Edmonton's population grew larger and more prosperous over the next 25 years, more would follow. When Woodward's chose Edmonton for its second store in 1926, it built a three-storey, 60,000-square-foot building complete with state-of-the-art lighting and heating systems. The discount-focused Army and Navy would open its first Edmonton store in 1928, and Eaton's would open right in the centre of the city the year after.

These large department stores had an impact on the city that matches their square footage. By offering a wide variety of goods all under one roof, department stores were attractive to shoppers who wanted to avoid multiple trips to the different speciality stores. They were also a major source of employment in the growing city; the largest stores needed a small army of staff not only to work on the sales floor but also to import the goods to put on the shelves. Of course, the impact wasn't always so rosy. Small shopkeepers in Edmonton found it difficult to compete. And as with most aspects of life at the time, department stores weren't welcoming to everyone.

Given their size and popularity, department stores soon became social centres as well. And of course, they went all out during the Christmas season with lavish displays, decorations, and visits from Santa, or at least his helpers. Woodward's, for example, put together a Toyland for the Christmas season, giving out gifts and showing movies for kids. Anything to entice parents to bring their families to the store (and hopefully leave with fewer dollars in their pockets).

The quick rise of the department store in Edmonton is in contrast to its slow, agonizing decline. Tough economic times, the expansion of malls and U.S. retail giants like Walmart, and the rise of internet shopping are some of the many factors that took down department store companies. Edmonton's last Woodward's closed down in 1993. The Eaton Centre shut down in 1999 when the whole company went under. The building was combined with a neighbouring shopping centre to create City Centre Mall. The latest of the closures is the downtown HBC, which closed its doors this spring.

While many of the stores that rely on Christmas cheer to draw people in might be gone, the appeal of the season for retailers is as strong as ever. The skeletons and ghouls from Oct. 31 were barely put away before a host of Christmas markets, sales and other events popped up all across the city.