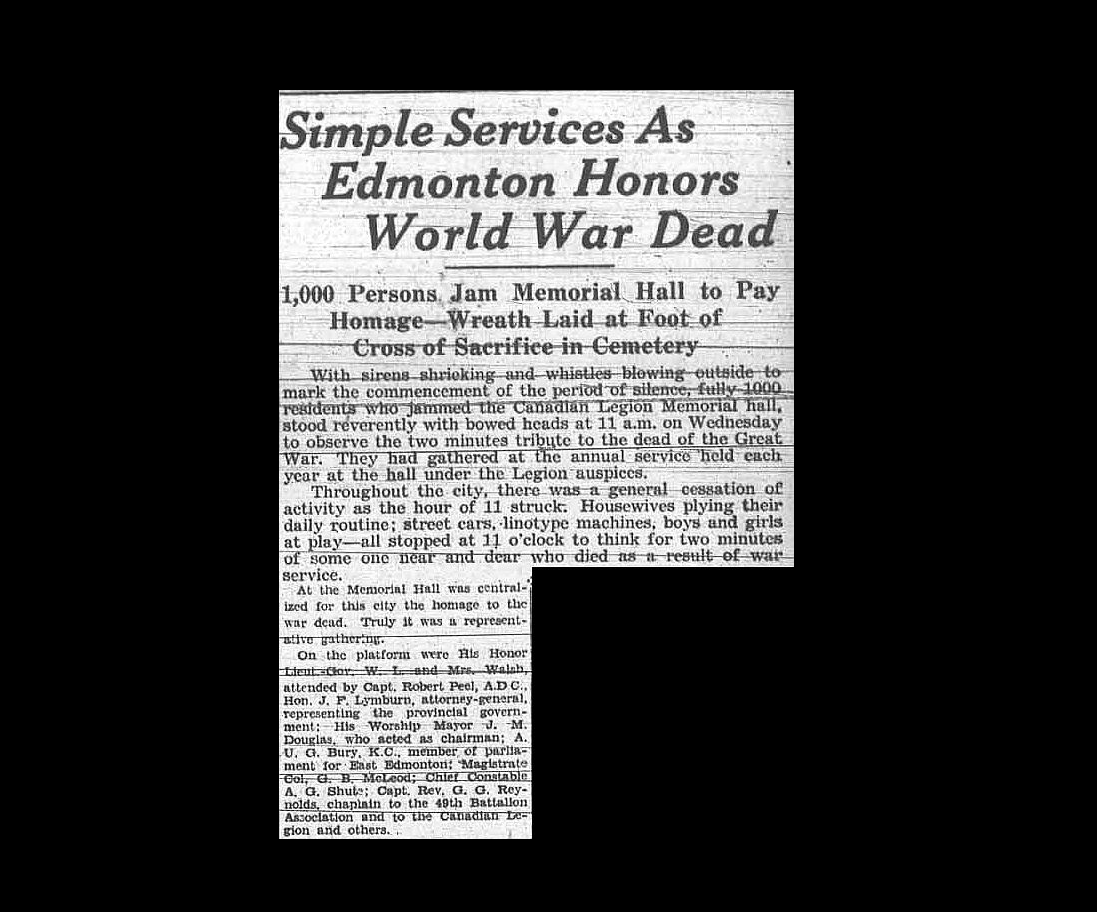 On this day in 1931, as will be the case today, Edmontonians were observing two minutes of silence to mark Remembrance Day.

"Throughout the city, there was a general cessation of activity as the hour of 11 struck," the newspaper reported. "Housewives plying their daily routine; street cars, linotype machines, boys and girls at play — all stopped at 11 o'clock to think for two minutes of some one near and dear who died as a result of war service." More than a thousand jammed together for a ceremony at the now-gone Memorial Hall.

The First World War, which ended 13 years before this particular ceremony, began at a pivotal point in the city's history. After decades of prosperity and rapid growth, 1913 was marked by a severe economic downturn. The war only added to that hardship, further damaging the city's economy. For many young men with few other prospects, it was "a choice to starve or get enrolled," says a history of the Edmonton General Hospital. By the end of 1915, 15,000 men from the Edmonton region had enlisted.

When the first reports of an armistice reached Edmonton, the city exploded with celebration. An impromptu parade, led by honking cars, crawled its way along Jasper Avenue.

Those attending that 1931 Remembrance celebration could not have known the world would be thrust into war again in less than a decade. Once again, tens of thousands of Edmontonians were sent overseas. While the battles were fought on the other side of the world, the war had massive impacts on daily life in the city. Labour shortages meant jobs normally closed to women were now opened up. Many of them were at Edmonton's Great West Garment Company, which would become one of the major sources of military clothes for the Allies. While women were denied combat roles, thousands signed up to work as nurses, office workers, and other jobs that supported the military effort.

The city's central airport, Blatchford Field, became a key part of the Allies' air program. Starting in 1939, it became a training ground for allied pilots from Canada, the U.K., and the United States. The airfield also served as a staging ground to send supplies and equipment to the Soviet Union; tens of thousands of flights stopped in Edmonton before continuing to Alaska and then Russia to help supply the eastern front.

Thankfully, the world has not seen another conflict of that scale in over 75 years. However, the city continues to mourn those lost in those battles, as well as more recent wars. While there will be no official ceremonies at municipal graveyards due to COVID-19, the city will be holding a memorial at the City Hall cenotaph shortly before 11. As well, the High Level Bridge will be lit up in red for remembrance.