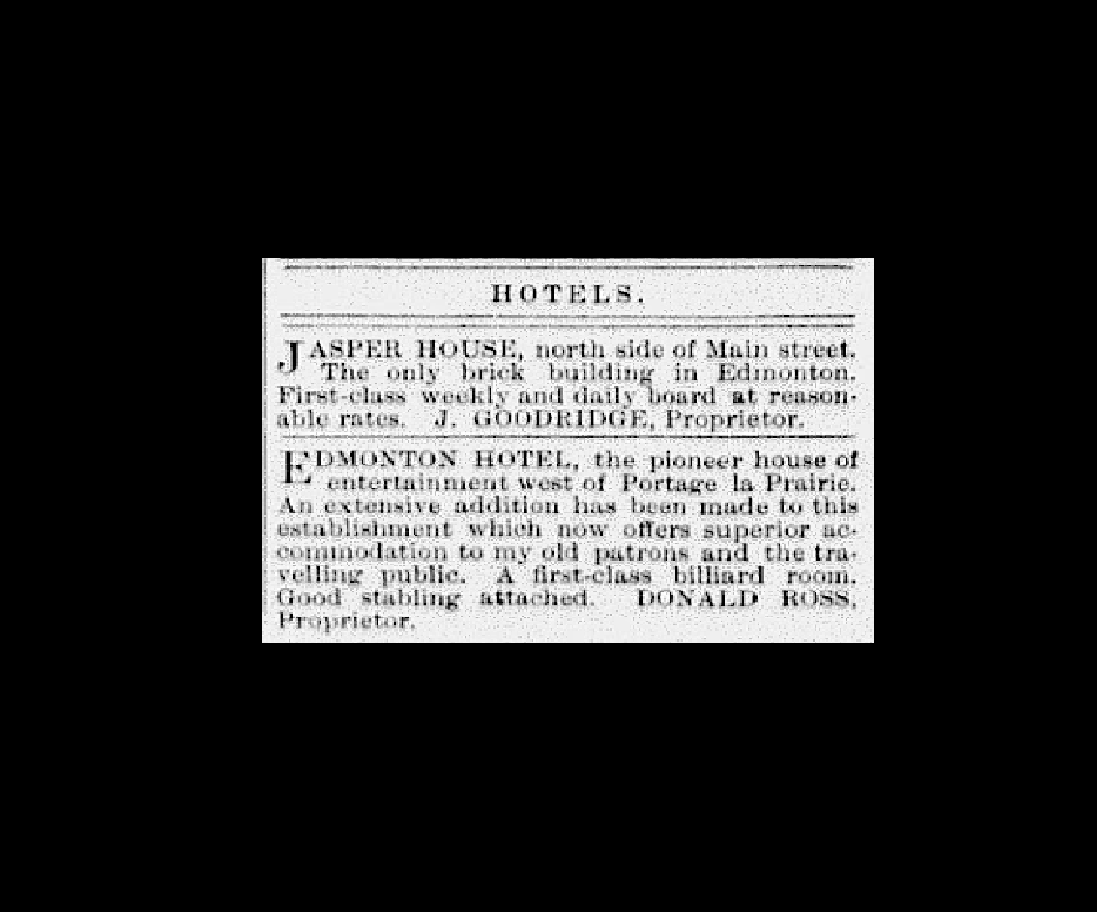 On this day in 1882, travellers were invited to spend a night at the newly expanded Edmonton Hotel.

The ad promised "superior accommodations" as well as a "first-class" billiards room in a building that sat on a hill overlooking the North Saskatchewan River.

The Edmonton Hotel held the distinction of being the first hotel built west of Manitoba, as well as one of the first buildings erected by settlers outside the walls of Fort Edmonton. The flats around the fort had been a gathering place for Indigenous people for thousands of years; the 1870s saw settlers begin to claim lands along the river in the area. Don Ross was among the first when he purchased lot No. 4 in 1875.

Ross had come to Edmonton from Scotland to pan for gold. But after building his house at the base of what is now McDougall Hill, he spotted a different opportunity. The railway was more than a decade away, and the North Saskatchewan was still the main transportation link for the area. With easy access to the water, Ross's home became a popular destination for travellers who had the same dreams of gold that drew him. He turned it into a rooming house before transforming it into the Edmonton Hotel.

It proved to be a lucrative business. Eventually, the Edmonton Hotel would boast five private rooms. Ross was known to rent out tables — or even his billiard tables — for travellers to sleep on when the actual beds were full. The money from the hotel allowed Ross to invest in other industries, including a coal mine, shipping, and brickmaking. Both he and his wife, Olive, became influential figures in the growing city.

A devastating flood in 1915 wiped out many of the buildings along the North Saskatchewan. Ross's hotel was one of the few to survive, owing to his decision to build it further back on the plot. However, Ross died the same year. He was buried in the neighbourhood that now bears his name.

By that time, the economic boom of the previous decades had turned into a recession, worsened by the First World War. After Ross died, visitors dwindled and the hotel was transformed back into a rooming house. A decade later, a fire engulfed the structure, dealing a fatal blow to Edmonton's first hotel.

Of course, now there are hundreds of hotels and accommodations spread out across the city, many of which are still struggling to recover as the pandemic nears the end of its second year. A new government subsidy, targeting the tourism and entertainment industries, was announced last month. And while the city no longer sees many gold chasers coming in via riverboat, several new routes at the Edmonton International Airport hold some promise of bringing new visitors to the area.