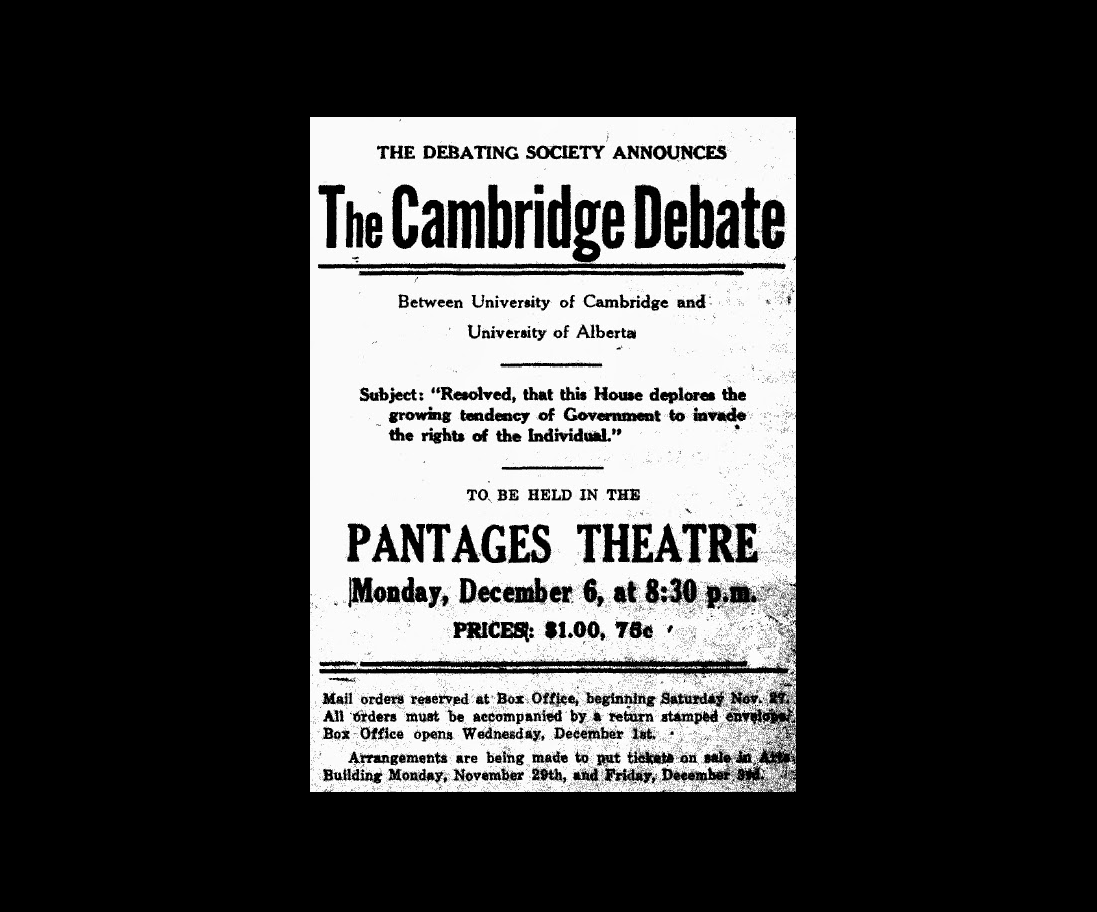 On this day in 1926, two universities were gearing up for a debate to be held at Edmonton's Pantages Theatre.

The intellectual sparring match between the University of Alberta and the University of Cambridge was one of the many events held at the historic downtown theatre, which was built in 1913 on the corner of Jasper Avenue and 102nd Street by Alexander Pantages, the influential Greek entertainment mogul. It was one of a string of theatres that Pantages built across Canada and the United States to welcome a circuit of vaudeville shows that started in Winnipeg.

Pantages partnered with a local businessman, George Brown, to design the Brown Block – a proposed skyscraper that would house the theatre as well as offices. The original plan was to make it 10 storeys tall, although the ambitious partners designed the foundation to support 15 floors. In the end, only two actually got built, but it was enough to house Pantages's grand theatre.

While the outside of the brick Brown Building might have been underwhelming, the interior was lavish. The theatre could seat 1,600 people – an impressive number for a city that was just shy of 70,000 people. Italian marble, Chinese silk, and hand-painted murals offered rare extravagance. Thousands mobbed the front entrance on opening day.

The theatre hosted many of the most popular vaudeville performers of the era, including Sophie Tucker, Stan Laurel, and Buster Keaton. But by the 1920s, tastes had changed. Pantages pulled Edmonton off of the touring circuit, and Brown converted the theatre into the Metropolitan Movie House to feed the demand for film, with a handful of live acts and lectures.

Financial troubles caused the theatre to close in 1929. It sat empty until two years later when it was purchased and renamed The Strand Cinema. The new owner, Alex Entwhistle, added sound equipment. While it focused mainly on film, the stage was still used by local opera and theatre companies.

As the decades passed, the Strand became a meeting place for Edmonton's gay community. Before gay bars, the city's LGBT community often had to find discreet places to meet, known mostly by word-of-mouth. The back row of The Strand was once described as having "a lively back row, but is definitely not recommended except for the most brazen and desperate of people," playwright and historian Darrin Hagen wrote in a piece for Edmonton City as Museum.

The Strand was designated as a provincial historical resource in 1976 and limped into the final days of 1978 before being shut down. Despite its status, it was torn down to make way for the Enbridge Tower.

The Pantages was one of the birthplaces of Edmonton's theatre community, which has grown to be a vital part of the city's culture. While live theatre, like most things, has been deeply impacted by the pandemic, the community seems to be coming back full force, with companies hitting the stage once more with sold-out shows.