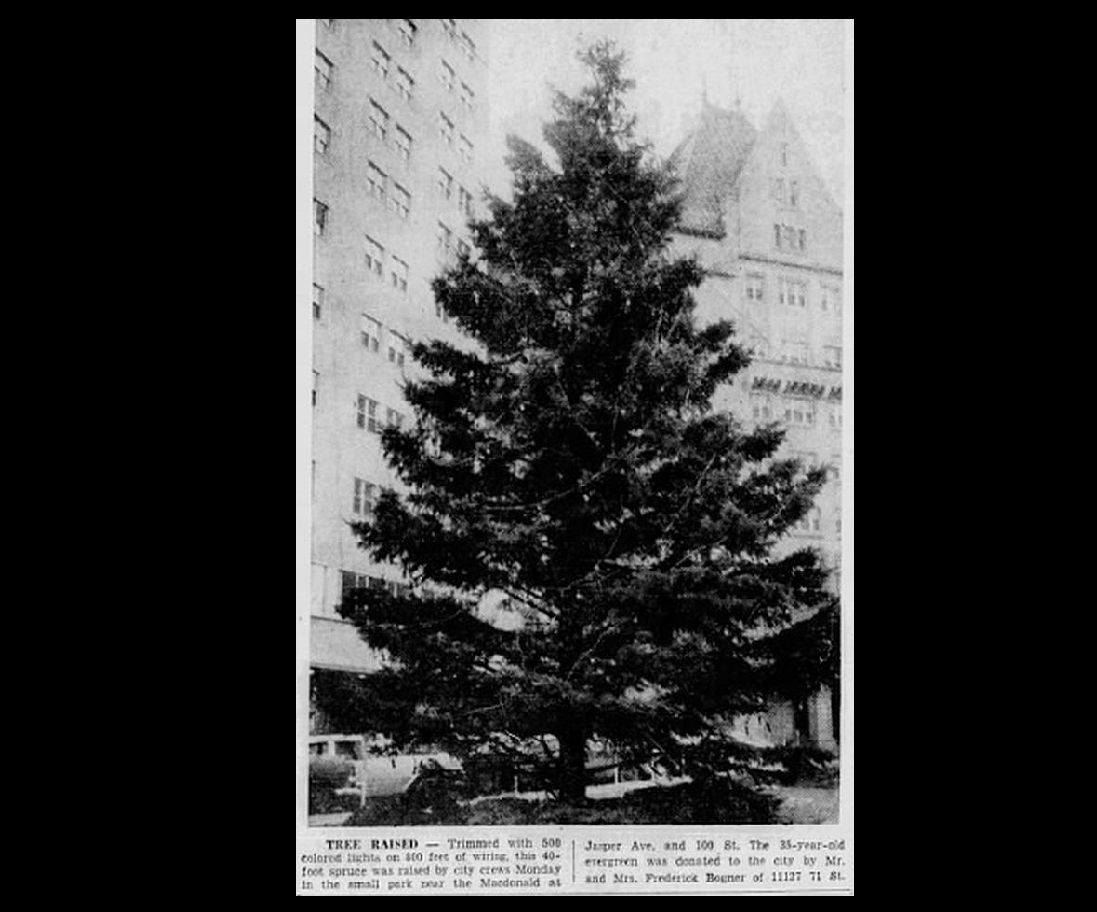 On this day in 1957, the Christmas tree in front of the Hotel Macdonald was put up for the holidays.

The massive 40-foot spruce was installed by city crews in the small green space in front of the hotel and strung with more than 800-feet of coloured lights to celebrate the season.

The Fairmont has a tradition of big Christmas displays - whether it be lavishly decorated trees both inside and outside the hotel or the sprawling gingerbread structures that have greeted guests in recent years. Edmonton identifies as a winter city and the days in deep December are short and cold. Luckily, a few other Edmonton holiday traditions warm up those freezing winter days.

Candy Cane Lane is one of the most enduring. It came from humble beginnings when a handful of houses along 148th Street put up Christmas displays outside their homes; primarily hand-painted wooden decorations. Each year, the decorations became more elaborate and more homes began to take part, drawing visitors from other neighbourhoods and eventually from across the city. In 2018, the stretch of 148th Street was officially named Candy Cane Lane to celebrate 50 years of beautiful displays. Half a century later, it has become a tradition for many Edmonton families and a significant fundraiser for the Edmonton Food Bank, second only to the Heritage Festival.

That spirit of helping those in need has long been a part of the holidays in Edmonton. The Christmas Bureau of Edmonton began in the winter of 1940, a difficult time for many in Edmonton. A significant number of the city's men were fighting in Europe. And while jobs traditionally not offered to women were opening up, many families still struggled financially. The Christmas Bureau of Edmonton provided food and other support to those in need, a tradition that has continued for more than 80 years. It also works alongside another Edmonton institution, Santa's Anonymous, which sees a small army of volunteers give their time every year to sort, package and deliver donated toys to less fortunate families around the city.

Edmonton has also played a part in many people's holidays outside its city walls, serving as the setting for a surprising number of Christmas movies. The best known is likely Christmas in Wonderland, with Patrick Swayze and Tim Curry, where a father on a shopping trip with his kids in West Edmonton Mall get caught up in criminal shenanigans. Others like Christmas Town, The Christmas Blessing, and Santa's Slay, were also filmed here.

The city's annual Christmas tree arrived in Churchill Square in November, one of the rare times it showed up in Edmonton before snow did. Meanwhile, home-sized trees have been selling out across the city.