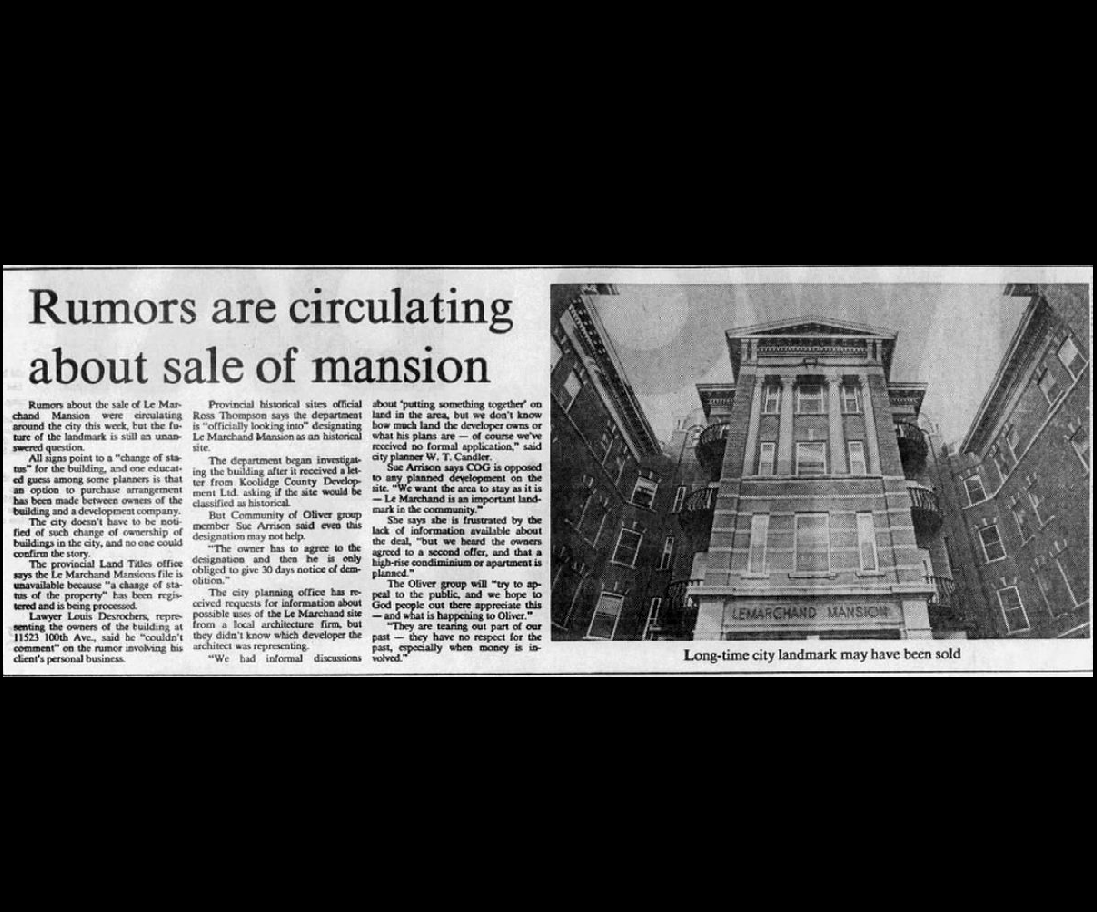 On this day in 1977, rumours were flying about the future of the LeMarchand Mansion. As the Edmonton Journal reported at the time, the Land Titles office would only say the four-storey building at 115 Street and 100 Avenue was undergoing a "change of status." The owners weren't saying much, and some worried a demolition of the then-68-year-old building might be in the cards.

René LeMarchand was already in his 50s when he came to Edmonton in 1905, after working most of his life as a butler in France. He arrived with some unusual cargo: hundreds of slightly used razors. He had inherited them from his former employer, a Parisian nobleman with an extravagant quirk — he never shaved with the same razor twice. LeMarchand sold his boss's castoffs at a luxury store on Jasper Avenue. Then he got into real estate.

When LeMarchand had the mansion constructed starting in 1909, his goal was to create the most luxurious apartment building in Canada. A Paris waiters' union kicked in much of the investment money, and the French influence extended to the Beaux-Arts design, evoking a sense of refinement and prosperity. The ornate columns and cornices, as well as an impressive lobby with hardwood, marble, and stained glass, made it one of the most recognizable buildings in the city and an address for the city's elite. It was also among the most modern, including state-of-the-art heating systems and one of Edmonton's first residential elevators.

LeMarchand died in 1921, and his wife kept the building until she died in 1949. Over time, it lost its lustre. However, it avoided being discarded like some French nobleman's once-used razor. In July of 1977, the province designated the building as a heritage property. And it still stands.

Other heritage buildings have not been so lucky. The El Mirador Apartments at 10147 108 Street may not have been as luxurious as the LeMarchand, but they too were a unique part of Edmonton's downtown before they were torn down to make room for development.

A recent audit of the city's $2.3-million historic resources management program found it was "generally effective," but suggested updating its guiding documents, making sure information on properties is current, and formalizing the process to assess the health and conditions of the city's historic properties.