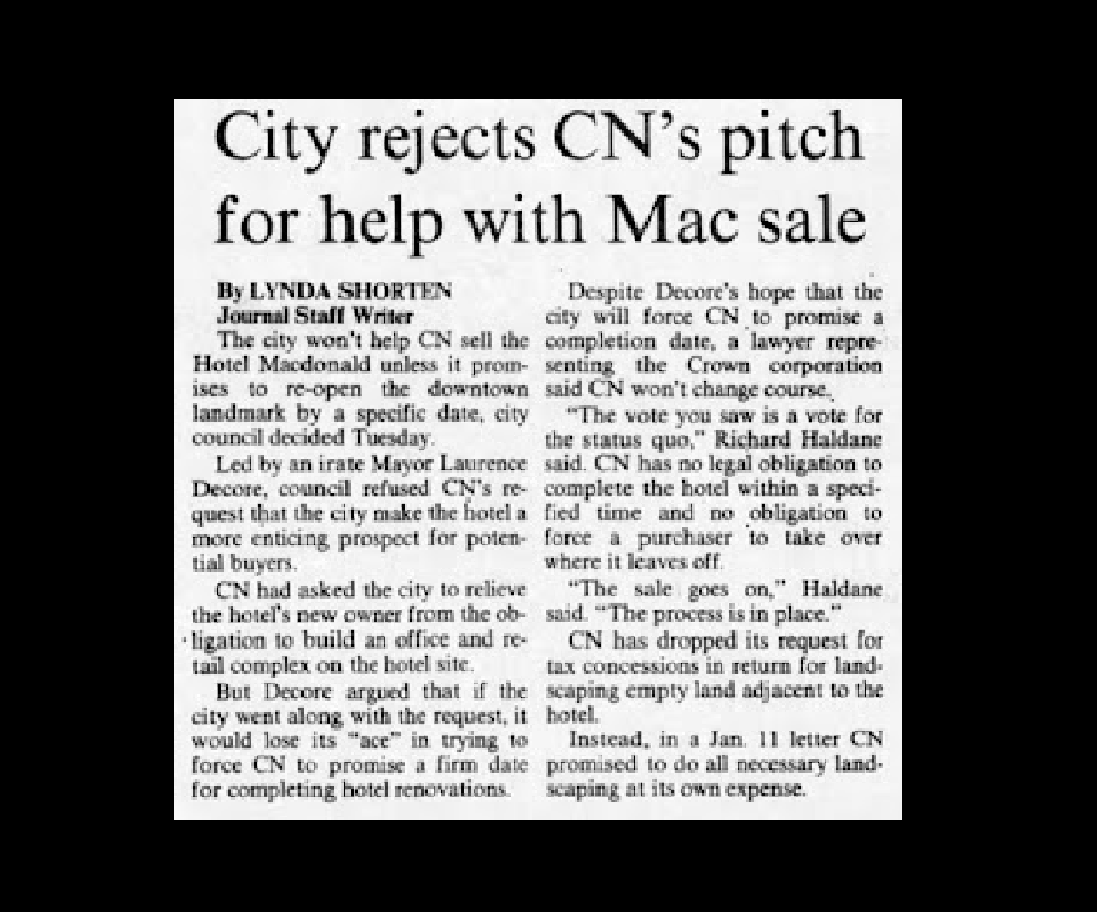 On this day in 1988, the city and CN were in a battle over the future of one of Edmonton's most famous buildings — the Hotel Macdonald.

From the very beginning, the Hotel Mac was built to capture attention. Perched on the edge of an escarpment overlooking the North Saskatchewan, the copper roofing and Indiana limestone exterior make it an instantly recognizable feature in Edmonton's skyline. Château-style buildings were a particularly popular architectural trend for railroad-owned hotels at the time, with the Banff Springs, Toronto's Royal York Hotel, and the Château Frontenac in Quebec being other examples.

When the Grand Trunk Railway opened it in 1915, the Hotel Macdonald was not only a beautiful building but a modern one. It featured electric elevators, modern heating systems and other creature comforts considered cutting edge for the time. As such, it became the go-to accommodation for wealthy and powerful visitors.

The hotel was reportedly the site of Edmonton's first traffic jam when well-wishers drove by to try to catch a glimpse of King George VI and Queen Elizabeth in 1939. (Another traffic jam may have ensued in 1994, when Mick Jagger invited the whole of Commonwealth Stadium back to the hotel for a drink.) In 1950, a blocky 16-storey, 300-room expansion went up alongside the building. The annex was such a wild departure from the stately hotel's Château style that many Edmontonians referred to the pair as "the Hotel Mac and the box it came in."

Despite its reputation, the 1980s were a dark decade for the hotel. High maintenance costs and growing disrepair led to its shuttering in 1983, to loud public outcry. CN, now the owners of the Mac, demolished "The Box," and it seemed the original building was destined for the same fate. In 1985, the City of Edmonton deemed the building a municipal heritage resource, the first building in the city to receive that form of protection. That started a series of renovations that appeared to have no end in sight. CN was eager to offload the hotel, and the city was just as keen to see it reopen.

Finally, in 1988, CN sold its entire hotel chain to Canadian Pacific, including the Macdonald. Renovations continued for another three years before the hotel reopened in 1991 to considerable excitement. Now managed by Fairmont, the Hotel Macdonald still offers some of the most luxurious accommodations in the city.

It temporarily closed in 2020 during the initial wave of the COVID-19 pandemic, but has reopened with new safety protocols, though business remains difficult for the hospitality industry. A few weeks ago, the provincial government announced an extension to a program designed to help Alberta hotels survive the drop in visitor numbers.