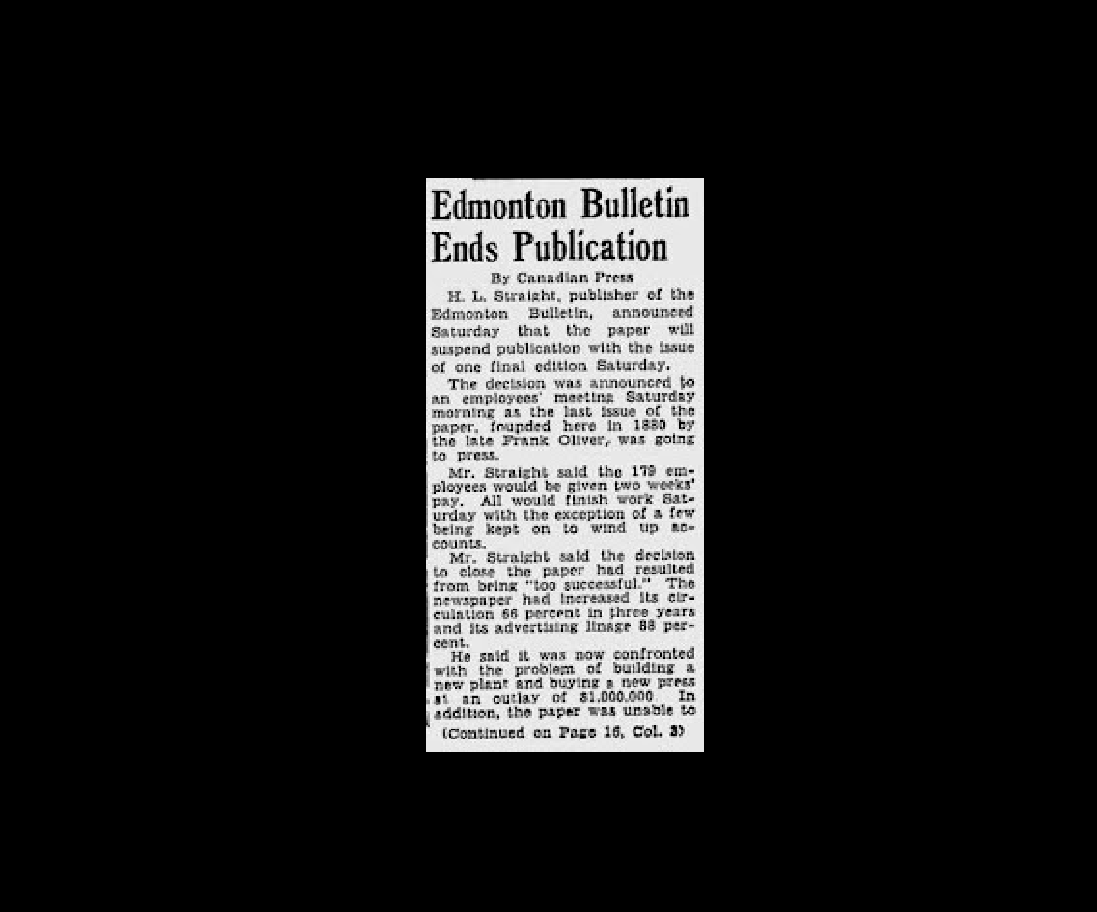 On this day in 1951, Alberta's first newspaper was going to press for its final few issues.

The Edmonton Bulletin was established in 1880 by businessmen Frank Oliver and Alex Taylor. It was initially produced out of a tiny 16-square-foot log structure on the site of what is now the Hotel Macdonald. (The original building now stands in Fort Edmonton Park.)

Oliver referred to the publication as "the world's smallest newspaper". It was mainly short updates from other parts of the country and the world, sent in by Edmonton's first telegraph, also established by Taylor. (Aside from the newspapers and the telegraph, Taylor was also known for bringing electricity and telephone service to the city. The Bulletin also served as a booster for both Edmonton as a whole and the political opinions of its co-founder, Oliver.

At first, the Bulletin published every week. Edmonton was growing quickly, however, as was the demand for the paper. Within two years, it was published twice a week. By 1903, it became a daily, and in 1910 the Bulletin published morning and evening editions. Meanwhile, competition was emerging, with the Journal starting in 1903 and the Capital in 1910.

A labour dispute in 1925 led to the end of the Bulletin's morning edition, but the paper continued for the next couple of decades. When the Edmonton Bulletin's demise came in 1951, the owner told the Canadian Press that it wasn't due to lack of readership but rather from being "too successful," claiming an increase in circulation and advertising meant the need for a new printing press and building to keep up with demand and the rising costs of supplies.

The paper's closure came as a surprise, not only to readers but also to employees. Many of them found out about the loss of their jobs through an advertisement in their own paper. The Journal became the city's only daily paper until the Edmonton Sun began in 1978.

The Journal and Sun remained competitors until 2014 when Postmedia, the chain that had owned the Journal since 2010, bought Sun Media. That was followed by the amalgamation of the two newsrooms in 2016, which saw many journalists lose their jobs and prompted the foundation of Taproot.