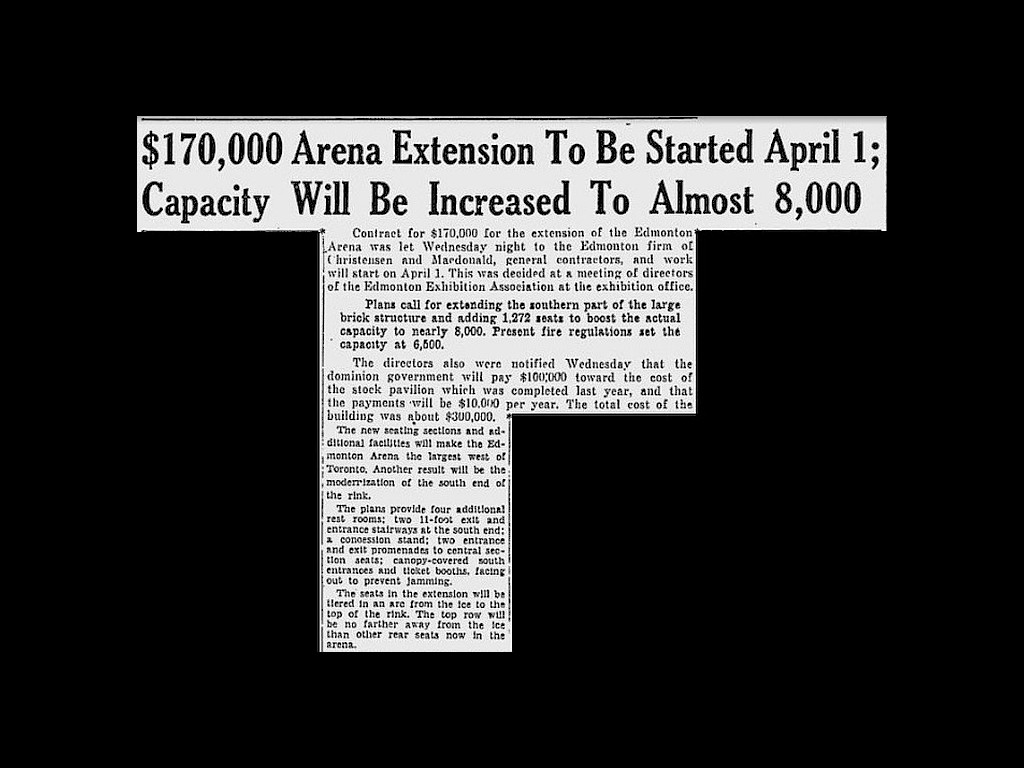 On this day in 1949, the wheels were in motion for $170,000 worth of renovations to Edmonton's longest-standing arena, including more seating, new restrooms, and a concession stand.

By the time it closed, the Edmonton Arena had served as the city's main arena for more than 60 years — an impressive run for a building that wasn't even designed for that purpose. It was intended to be a livestock pavilion and was thus built in 1913 at the fairgrounds near what was then the edge of the city. Unfortunately, downtown's Thistle Rink burnt down, and Edmonton was left without a place to host hockey games and other large events. A skating surface was improvised for the pavilion, and it soon began its double life as an arena in the winter and a livestock hall when the weather became too warm for ice. The structure was built and maintained by a private organization called the Edmonton Exhibition Association, which later became Edmonton Northlands.

Given its split personality and the shape of the building, the Edmonton Arena was nicknamed The Cow Barn. There were calls to replace the uncomfortable building with poor sightlines, but plans for a new downtown arena wouldn't come to fruition for a long time. In the late '40s, Northlands decided the newly renovated Edmonton Arena needed a new name, choosing the Edmonton Gardens. The expansion upped the seating capacity to around 8,000 people, making the Edmonton Gardens the largest arena west of Toronto.

By the 1960s, the aging Gardens were becoming both an eyesore and a safety hazard. Water would often drip onto the ice, creating troublesome mounds for skaters. A second renovation happened in 1963, but it didn't make the Cow Barn much safer. The Edmonton Journal called it a "disaster waiting to happen", and soon after, the city's fire chief condemned the Gardens. Another round of renovations addressed many of the issues, allowing the Gardens to reopen at a reduced capacity of 5,200 seats.

Throughout its life, the Gardens were home to the Edmonton Oilers, the Oil Kings, the Flyers, and countless agricultural shows, concerts, and other events. In 1974, both the Oilers and the Oil Kings moved across the street to the new Northlands Coliseum. As a result, the Edmonton Gardens retired after more than a half-century.

The building itself was demolished in 1982, but it didn't go down easily. The first attempt with dynamite and a bulldozer failed. A second attempt to blow it up with hundreds of sticks of dynamite also didn't have much impact. It was finally a wrecking ball that brought down the building.

The land the Edmonton Gardens once sat on is now home to part of the Edmonton Expo Centre, another building that used to be run by Northlands, which ceased operations a few years after the construction of Rogers Place downtown ended the Coliseum's run. The Coliseum is likely destined for a date with a wrecking ball itself. And the city is exploring options for the buildings around it, such as turning the old Coliseum Inn into hundreds of units of supportive housing.