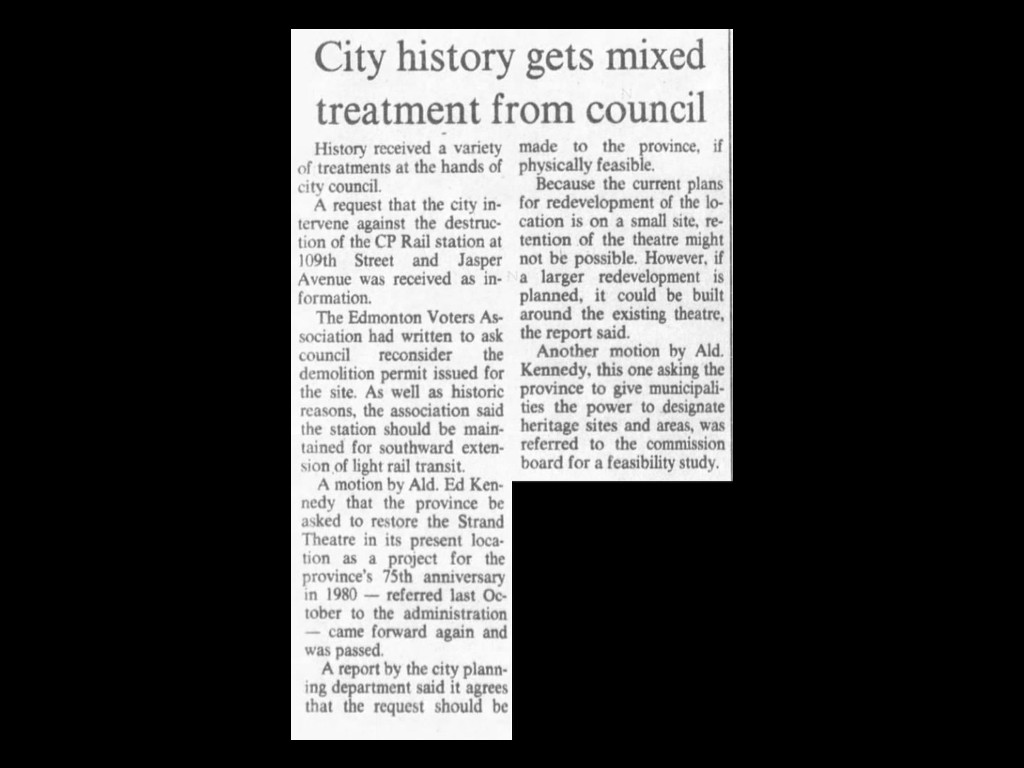 On this day in 1978, Edmonton's city council was considering a plea from the Edmonton Voters Association to save the rail station at 109 Street and Jasper Avenue from demolition.

The early days of Edmonton saw a handful of railways competing for passengers and freight. The Calgary and Edmonton Railway was built in 1891, but it didn't cross the North Saskatchewan River, ending its service in Strathcona. When Canadian Pacific bought the line, it knew that it would be missing out on business if it remained south of the river — indeed, the Canadian National Railway built a station at 104 Avenue and 101 Street when it arrived in 1905, spurring the creation of the warehouse district. To connect to Edmonton's booming downtown, the CPR would need a station. And a bridge to get to it.

Construction of the High Level Bridge and the Jasper Avenue station was completed in 1913. The station was two storeys tall and made of reinforced concrete, with a ticket office, a waiting area, dining, a smoking room, and an area for newly arrived immigrants. The area around the station became a tangle of railway and streetcar tracks, and a bridge extended over Jasper Avenue to allow trains to head south unimpeded.

Then an economic depression hit, worsened by the outbreak of First World War a year later. Nevertheless, the CPR survived while many competitors went bankrupt or were nationalized. The Jasper Avenue station remained busy as a significant departure point for young men headed east before going overseas to fight in Europe. And it continued to be a vital part of the CPR network through the 1920s as grain exports grew, and more passengers arrived to visit or stay.

The station remained open until 1972 when CPR ended passenger service north of the river. Despite pleas of the Edmonton Voters Association and other like-minded people, the station was demolished in 1978. Tracks were torn up to make way for new development and roadways. The railway bridge that spanned Jasper Avenue was taken apart in 1992 and shipped to Fort Edmonton Park.

A grocery store and shopping centre now stand on 109th and Jasper. Still, some reminders of the rail hub remain: multi-use paths extend north and south along the old rail right-of-way. The historic Edmonton streetcar uses some of the CPR's old rail infrastructure to run between Old Strathcona and downtown. And anyone travelling along Jasper Avenue has experienced the dip in the road from when the street used to duck under the old rail bridge.

The futile fight to save the 109 Street station in the '70s might seem familiar. Questions remain on how much should be done — and how much spent — to protect the city's historic buildings. To remember what has already disappeared, check out 305 Lost Buildings of Canada, illustrated by expat Raymond Biesinger, which includes 21 Edmonton places that were dismantled, burnt down, or otherwise destroyed.