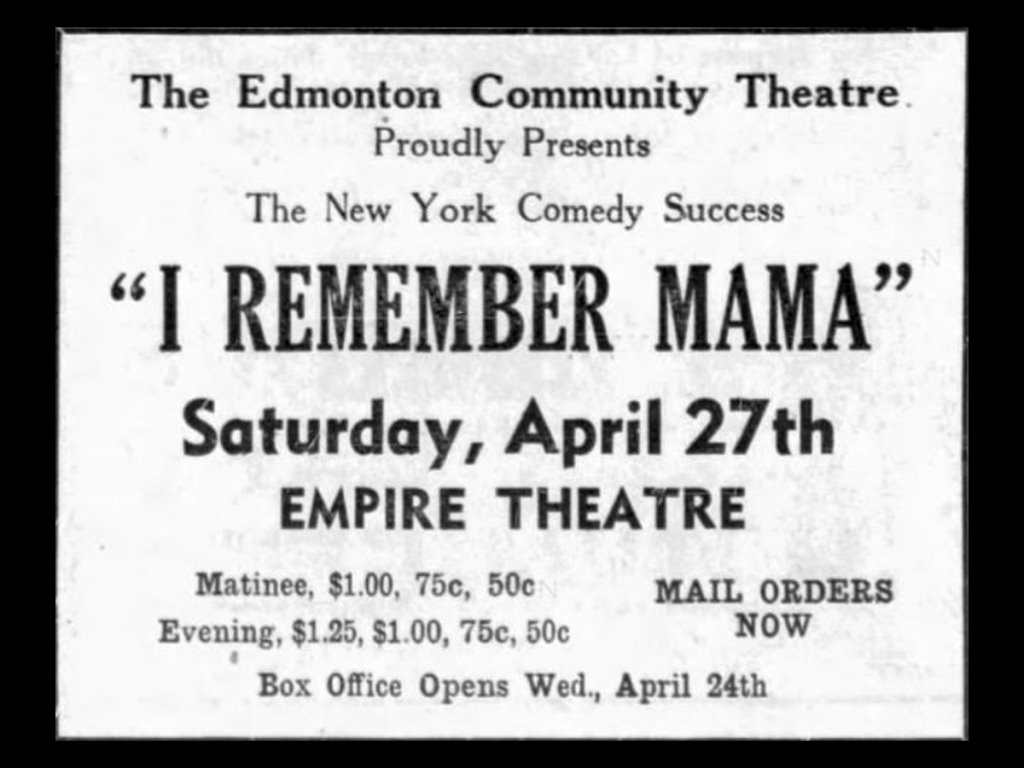 The production, which received a glowing review from the papers the next day, was the 59th for the Edmonton Community Theatre but one of the first under that name. Until the year previous, the theatre company was known as Edmonton Little Theatre.

The group was founded in the late 1920s as part of the 'little theatre' movement that swept across North America. Little theatres were just that — groups of actors and directors that put on smaller productions, often more artistically experimental and daring than those of the big touring theatre companies.

Elizabeth Sterling Haynes was one of the driving forces behind Edmonton Little Theatre and played an integral role in developing theatre not just in the city but across the entire province. Haynes was born in England and moved to Ontario when she was a child. In 1921, Haynes married a dentist, and the pair moved to Edmonton, where Haynes quickly established herself as a talented actor and director.

Aside from helping found the local little theatre company and serving as its first artistic director, she also helped found the Alberta Drama League. A few years later, she took a role at the University of Alberta as a specialist in drama and head of theatre education. It's a role that saw her travel across the province, helping small local theatre companies organize and put on performances. Hayne's passion for theatre and high standards helped lay the foundation for local theatre groups that still plays out on stages across Alberta.

Hayne was a frequent voice heard on CKUA Radio, being involved in both radio plays and educational lectures. In 1933, she helped found the Banff School of Drama, which eventually expanded into other fine arts programs and became the Banff Centre.

Haynes continued to be a key player in Edmonton's theatre scene into the 1950s when her health started to decline. She moved east again with her husband in 1955, where she continued to be active in the theatre community until her death two years later. The Elizabeth Sterling Haynes awards are handed out every year to celebrate Edmonton theatre.

But even more than the awards, Hayne's legacy lives on within the city's vibrant drama community she helped build in those crucial early years. It's one that has been hard hit, like other live entertainment, by the COVID-19 pandemic. But bright spots still remain, including the resurrection of the Roxy Theatre earlier this month, which was destroyed by fire seven years ago.