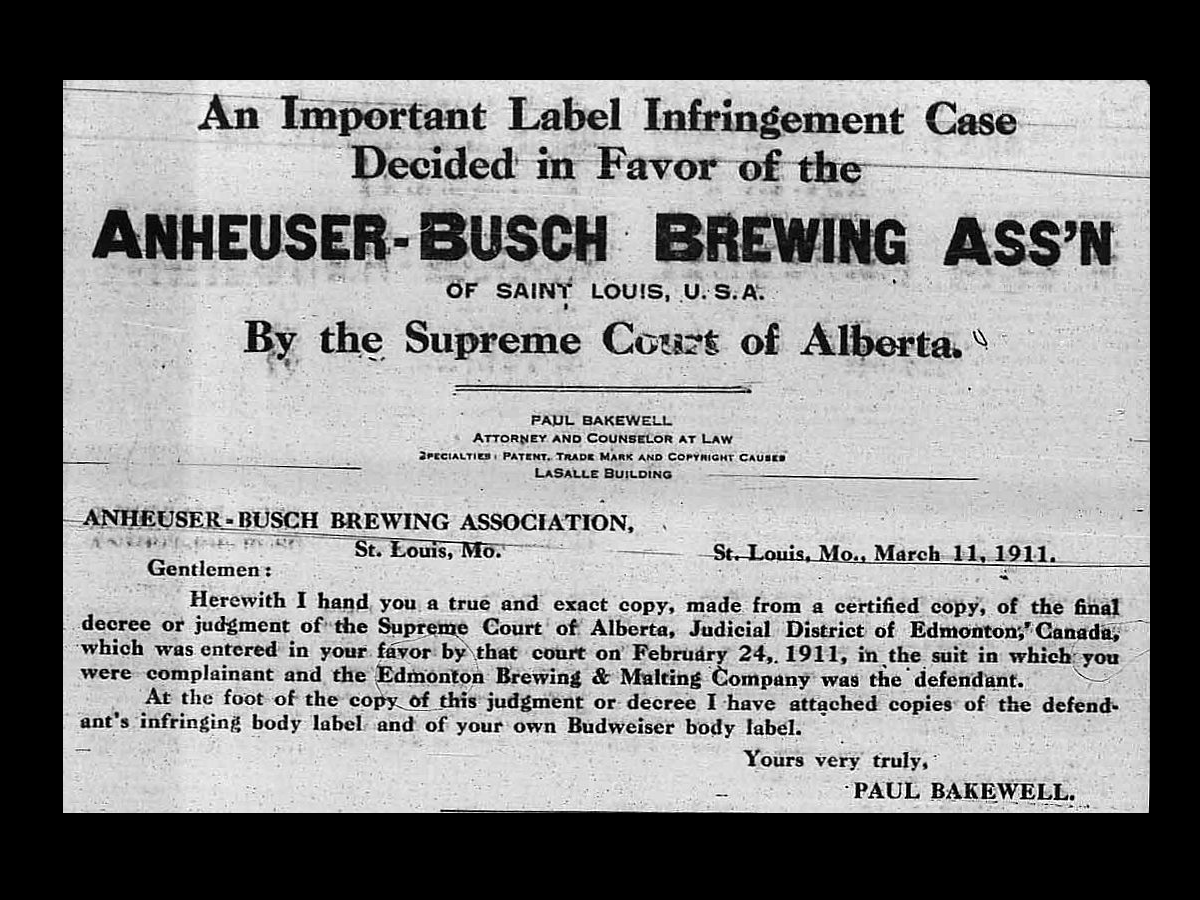 On this day in 1911, it became clear that Edmonton's first brewery was in big trouble for copying Budweiser beer.

A notice in the newspaper referred to a February decision by Alberta's Supreme Court that the Edmonton Malting and Brewing Company had sold beer with labels that too closely matched those by the much better-known Budweiser. And looking at the examples that were printed, it appears the court had a point.

When W. H. Sheppard opened Edmonton's first brewery in 1904, he probably had a good idea of the desire for beer in the city, given as he was already the owner of the Strathcona Hotel (as well as the mayor of Strathcona). But even he might not have been prepared for the demand. In its first year, the original Rossdale facility produced 2,000 barrels of beer. Three years later, production had increased tenfold.

The hand-slap doled out by the provincial supreme court didn't slow the brewery down too much. By 1913, Sheppard needed more space. So the company eventually settled on a patch of land on 104 Ave and 121 Street to build its "beer castle" — a five-storey red-brick building designed by Chicago architect Bernard Barthel, who was well-known for his ornate breweries across the United States.

Shepard sold off the company, and the beer castle, to the unfortunately named Fritz Sick, another major player in Alberta beer-making. The 104 Avenue building remained part of Sick's empire until Molson bought a controlling share in 1958. The company installed a massive rotating "M" sign on the roof and operated the building until it was closed in 2007.

Both the beer castle and the Rossdale brewery still remain in some form, protected as historical buildings and reminders of the province's history of beer-making. Alberta's brewing industry is a lot more varied than in those days, with dozens of brewers across the province — the Edmonton Brewing and Malting Company still among them. Some of them will be represented at various events this year, including the Canadian Brewing Awards in Calgary this week or Edmonton's Craft Beer Festival later this summer.