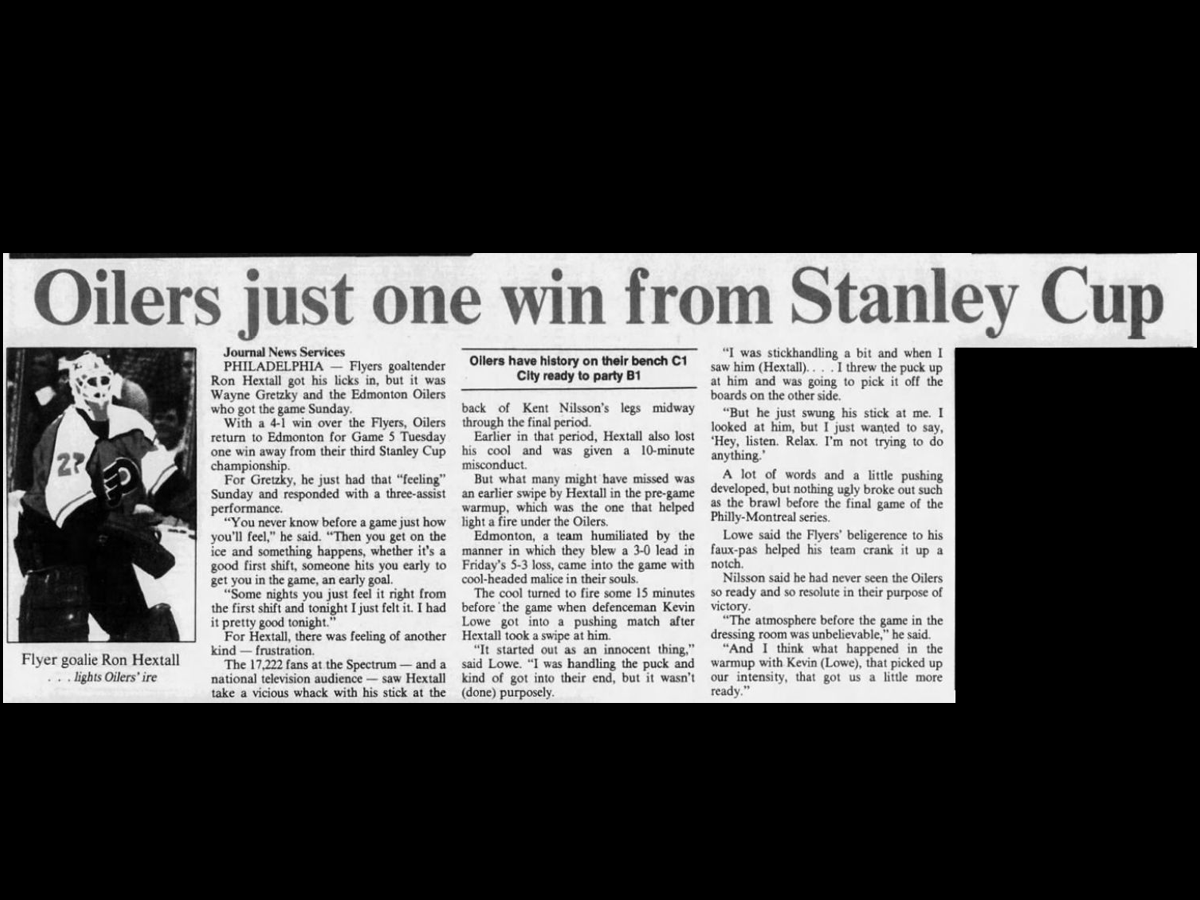 On this day in 1987, the Edmonton Oilers were one win away from their third Stanley Cup.

But clocking that final win wouldn't come easily. The playoffs always have a few nail-biting moments that can shake even the most veteran Oilers fan. But even compared to other Cup runs, the '86-'87 post-season was a rollercoaster. No one wanted to repeat the previous season, where the Oilers' hopes of three straight Stanley Cups were dashed by losing in seven games to the rival Calgary Flames. Least of all defenceman Steve Smith, whose infamous pass attempt bounced off the goalie's skate into the Oilers' own net, sealing the win for Calgary.

The '86-'87 playoff run started on a sour note for the Oilers, losing their first game 5-2 to the L.A. Kings. However, rather than being demoralized, Edmonton came back with a dominating 13-3 win in the second game. It was the first of eight straight wins that would knock out the Kings and then the Winnipeg Jets. After defeating Detroit, the Oilers met the Philadelphia Flyers for the final series.

It was a showdown between two powerhouses — for the past three seasons, both teams had held either the best or second-best regular-season record in the league. The Oilers took a quick lead, winning the first two games in Edmonton and the fourth in Philly. While they were only one win away, the Flyers made them work for it by pushing the series to the seventh game.

The game started on the wrong skate for the Oilers after Philly's Murray Craven scored less than two minutes in. But Edmonton rallied quickly. Mark Messier responded to tie it up in the first period, and a Jari Kurri goal assisted by Wayne Gretzky in the second put the Oilers ahead. With a little over two minutes left in the game, Glenn Anderson scored — sealing Edmonton's third Stanley Cup win and soothing the pain of the previous spring.

With the game over, the Oilers met on centre ice to receive the Stanley Cup. First, Wayne Gretzky held the trophy up in front of a jubilant hometown crowd. And then he handed it over to Steve Smith.

It has been more than 30 years since that emotional playoff run, and again the Oilers are reaching for the Stanley Cup. They'll have to win the current Battle of Alberta and two more rounds to do so. Game 4 is in the books, and Game 5 is at the Saddledome on May 26.