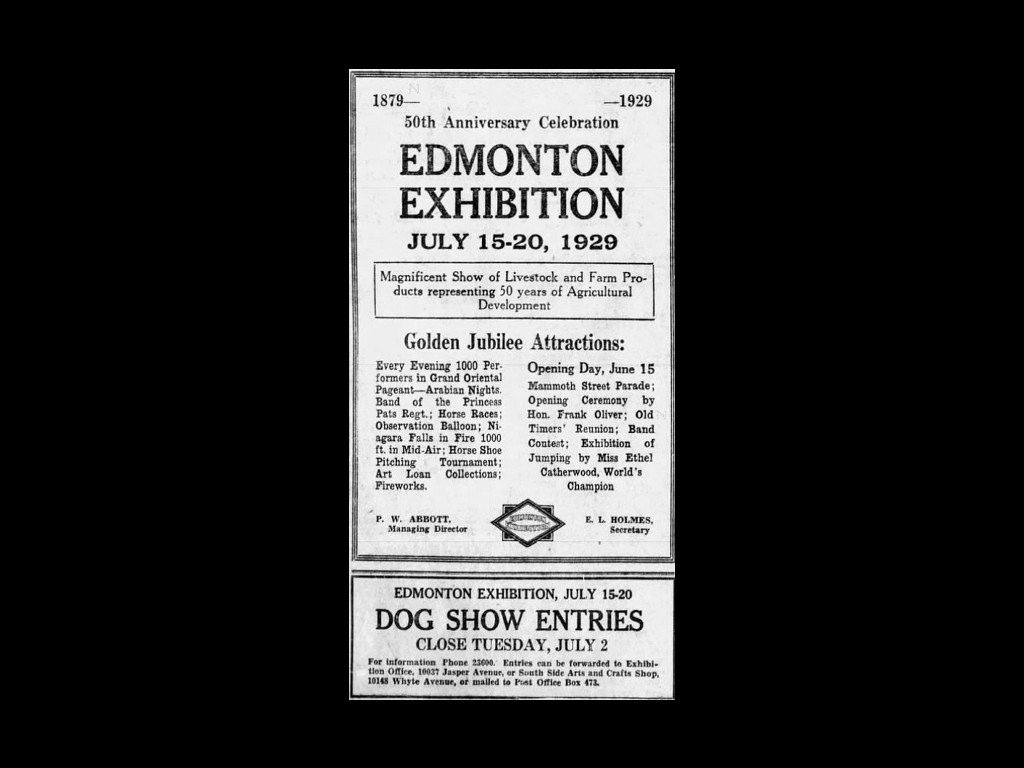 On this day in 1929, the city was preparing for the 50th anniversary of the Edmonton Exhibition.

The Golden Jubilee promised a busy couple of days in July: horse races, a dog show, a street parade, and a hydrogen blimp over the city. The celebrations also featured a demonstration of high jumping from Saskatoon's Ethel Catherwood, who had become the first Canadian woman to win an Olympic gold medal just a year before.

The exhibition got its start in 1879. The 19th century saw the birth of modern farming, and there was a general fascination with the new methods and technologies used in agriculture. The original event displayed livestock, harvests, and agricultural equipment at Fort Edmonton, drawing a crowd of about 500 people.

By 1910, when the event moved to Northlands Park, there were 80,000 attendees. As the years went on, the exhibition changed to appeal to an increasingly urbanizing city, with additions such as rides and auto races. However, agriculture remained a big part of the festivities.

By the middle of the century, the exhibition drew hundreds of thousands of people each year. But enthusiasm was waning, and fewer people felt a connection with agriculture. In 1962, the exhibition rebranded as Klondike Days. The new theme focused more on Edmonton's heritage and its role as a stopping point for the gold rush.

Klondike Days wasn't just confined to the fairgrounds: during the '60s and '70s, a stretch of Jasper Avenue was shut to traffic so as to return to that 1880s feel. Costumes were a big part of the celebrations, with people dressing up in gold-rush era costumes (with the threat of ending up in Klondike jail for those who didn't take part.)

By 2005, attendance had climbed to more than 800,000 people. Still, organizers felt the gold rush theme had grown stale. A year later, the name was changed to the generic Capital EX, which didn't inspire much enthusiasm from the rest of Edmonton. It was a short-lived change, with festival-goers voting on the current "K-Days" moniker in 2012.

Edmonton and its exhibition have changed a lot since 1879, and more change is in the offing — Explore Edmonton engaged in a reimagining exercise earlier this year that is expected to be reflected in the 2023 fair. But the event is still going, 143 years later. This year's K-Days kicks off on July 22, offering nine days of concerts, exhibits, and attractions.