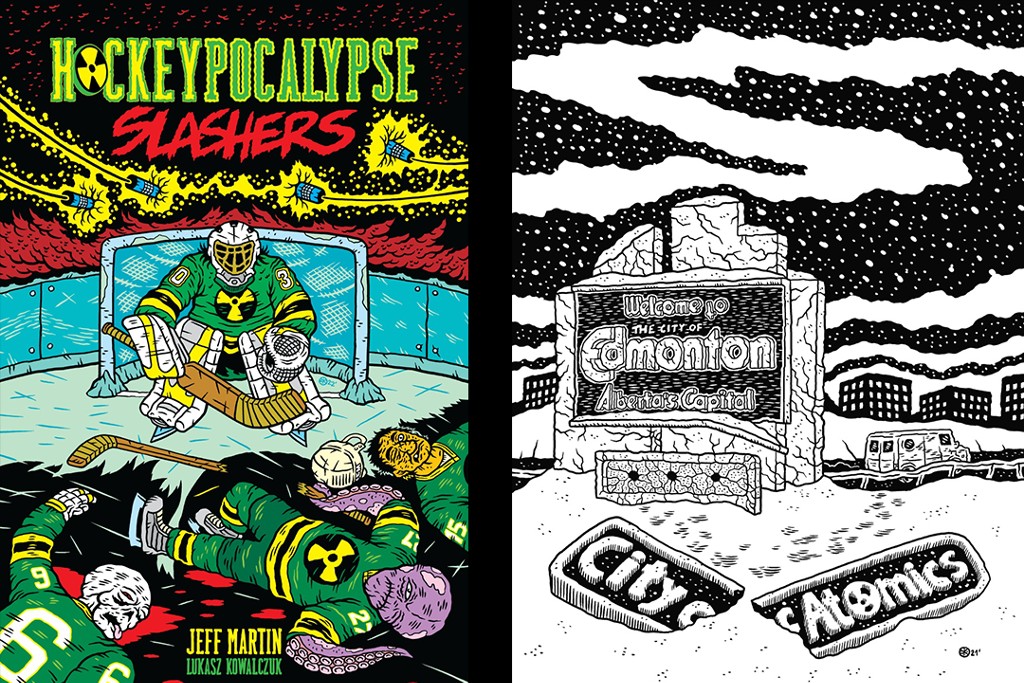 Jeff Martin's forthcoming graphic novel will be his fifth set in the post-apocalyptic Alberta of Hockeypocalypse, but it represents several firsts.

Martin was joined in his imagined universe by Polish comics creator Lukasz Kowalczuk, who helped develop the story idea for Hockeypocalypse: Slashers, and drew the cover and 15 interior pages. Kowalczuk will also be translating and re-lettering Slashers for a Polish release, making it the first of Martin's books to be printed in another language.

Martin and Kowalczuk melded styles and drew on their love of '80s slasher movies and straight-to-VHS horror to produce a story Martin describes as "Goosebumps meets Mighty Ducks." After many back-and-forth emails, the plot and ideas he and Kowalczuk amassed presented an unanswered question to Martin when he sat down to put it all together: "What is the emotional story that makes the cool stuff we have figured out already matter?"

The answer turned out to be the peculiar dissatisfaction afflicting the main character, Stretch, who has everything he ever wanted. In a world where all he has to do is play hockey, he finds himself unable to focus and losing the enjoyment he'd once found in the sport. The situation rang true for Martin himself.

"I have achieved what started out as being the dream — pretty much all I do is work on comics," he said. "But then realizing that in itself isn't quite enough. At what point do you become satisfied with the thing that you want? Or does wanting that thing inherently prevent that satisfaction somehow?"

It's a problem any artist will face, Martin said, especially those hiring out their creative skills to make ends meet.

"You'll get hired for a gig that isn't something you're passionate about. But you need a gig, so you take it. Then, all of a sudden, you find yourself doing all kinds of other random crap around the house and putting off drawing. Like, 'Wait, what am I doing? When I actually sit down to draw, I'm going to have fun.' But sometimes sitting down to draw becomes the hard part. And that's kind of where Stretch's story comes from."

A crowdfunding campaign for the English version of Slashers will finish on July 21, and the books will be available in the coming months. No release date has been set for the Polish version.

Photo: The cover and an interior page of Hockeypocalypse: Slashers, the latest instalment in Jeff Martin's graphic novel series. (Supplied)