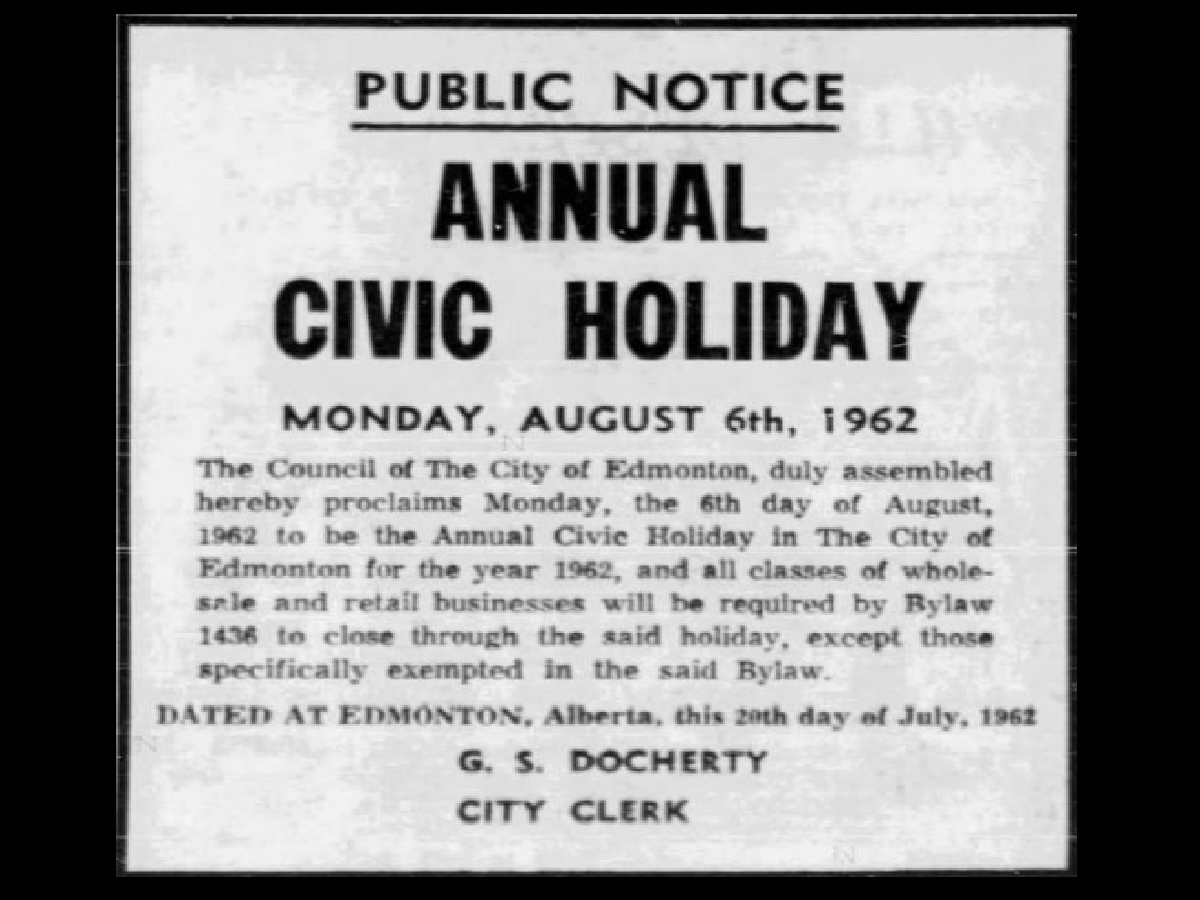 On this day in 1962, Edmonton was getting ready to celebrate the August long weekend for the first time.

With a notice appearing in the July 20 version of the paper, the city announced that the first Monday in August would be the creatively named Annual Civic Holiday. The August long weekend had long been a tradition further east; Toronto's city council had declared the first Monday in the month as the Civic Holiday in 1875, with other Ontario cities following suit. When Edmonton's city council declared its own municipal holiday, it decreed that nearly all wholesale and retail businesses would close for the day to give people a chance for recreation during the summer.

In 1974, the Edmonton holiday was replaced by a province-wide observance. The Alberta Legislature deemed the Monday to be Heritage Day, created to celebrate multiculturalism and the diverse heritage of the province's residents.

For the first couple of years, Heritage Day's main celebration was a multicultural concert held in Fort Edmonton Park, in addition to other events around the province. It wasn't until August 1976 that about a dozen ethnocultural groups set up pavilions in Edmonton's Mayfair Park (now known as Hawrelak Park) to display their cultures' food, artwork, and traditions. That was the start of the Edmonton Heritage Festival.

Even in its early days, the event was popular — about 20,000 attended the first Heritage Festival. And it grew, both in terms of pavilions and the number of visitors. Soon, the park hosted dozens of groups and hundreds of thousands of people every Heritage Day. In 1985, the festival started its partnership with Edmonton's Food Bank and remains the organization's largest fundraising event.

The summer of 1987 was nearly the end of the festival. On July 31, a Friday, a devastating tornado tore through the eastern side of the city, killing 27 and injuring hundreds more. The tornado caused more than $300 million in damage to the city, affecting many of the tents and infrastructure used by the festival. Luckily, the festival was able to continue due to the work of a group of volunteers who went from tent to tent, making repairs. That year also saw the first time a Canadian citizenship ceremony was held at the festival.

Heritage Day lost its status as a statutory holiday in 1990 when the province created Family Day. It now remains an optional holiday, like Boxing Day or Easter Monday, that many businesses in the province still observe. The Heritage Festival has continued its growth. In 2017, it reached nearly half a million attendees over the three-day event.

While the Heritage Festival has been closely tied to Hawrelak Park since its inception, it is on the search for a new home, at least for the time being. While next month's festival will still be there, the city plans to close much of the park for three years for major renovations.