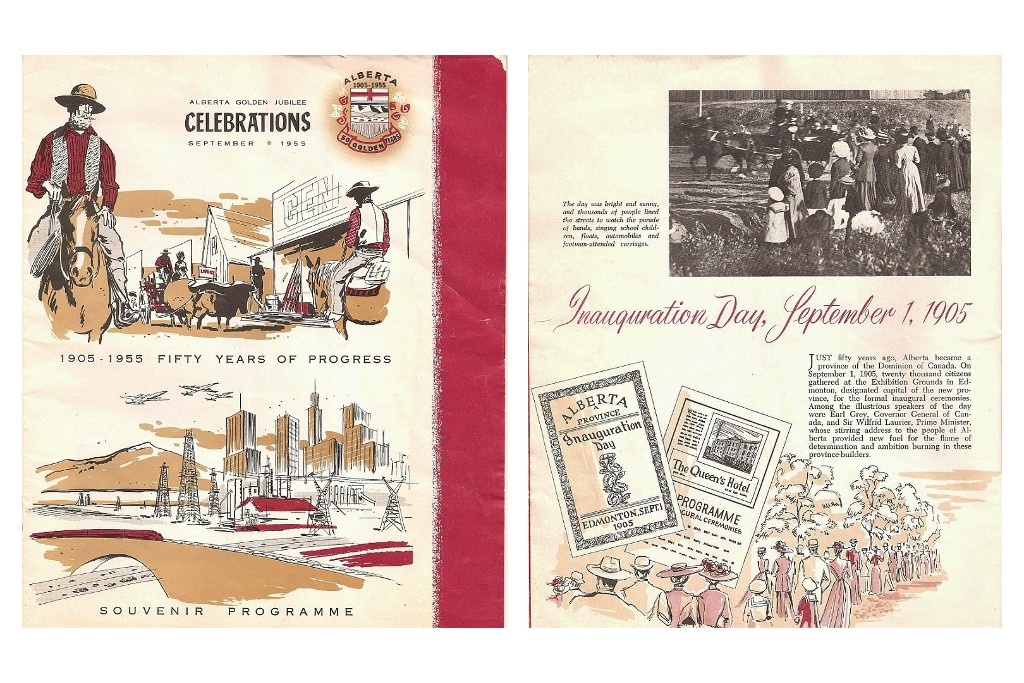 On this day in 1955, Edmonton was the centre of Alberta's Golden Jubilee celebrations.

The 50th anniversary of the province's creation served as a time to "look back at its years and count its blessings with humility and satisfaction," according to a souvenir program for the event. In addition, it highlighted the province's rapid growth over its first five decades, swelling from 116,000 to over a million between 1905 and 1955.

While there were celebrations to mark the 50th anniversary all over the province, the legislature was the site of the official ceremonies. The all-day event included the unveiling of a monument by Prime Minister Louis St. Laurent, as well as speeches from Premier Ernest Manning, Mayor William Hawrelak, and other dignitaries.

It was followed by a luncheon at the Hotel Macdonald and a parade that wound through downtown and headed east towards Clarke Stadium, where more ceremonies continued.

Aside from the celebration, Alberta's 50th-anniversary shindig left a few lasting impressions. A number of commemorative stamps, coins, and medallions were produced to mark the event. And a time capsule containing artifacts and recordings of the celebrations was sealed away to be later opened in 2005 during the province's centennial.

But the most obvious legacy of Alberta's Golden Jubilee would be the auditoriums that bear its name. Construction started on the Northern Alberta Jubilee Auditorium and its Calgary twin in 1955. In the decades since, both have seen several renovations and refits and have become anchors of their cities' respective cultural lives.

Recently, the provincial government created a new way to mark the province's founding: Alberta Day, to be celebrated every Sept. 1. While not a statutory holiday (as it falls in the same week as Labour Day), this year saw events across the province to mark the inaugural celebration, though enthusiasm for the idea appeared to be muted.