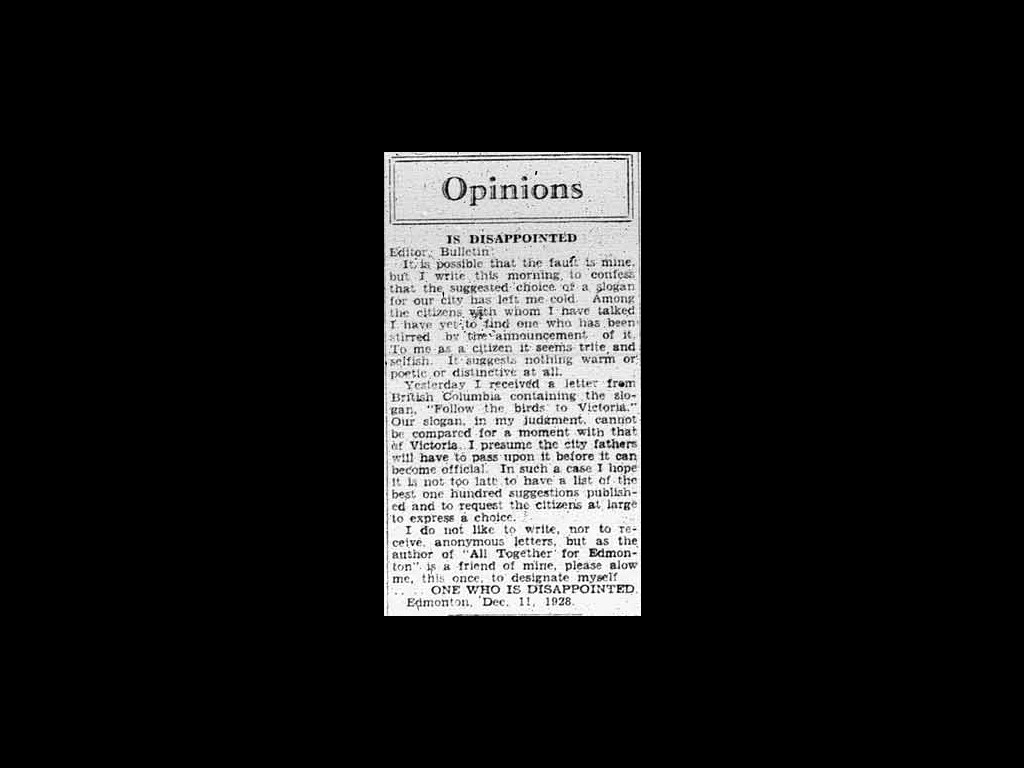 On this day in 1928, one anonymous resident was unimpressed with Edmonton's new slogan. The letter to the editor captured here might just be one of the oldest surviving examples of a grand Edmonton tradition: Complaining about the city's many slogans.

One of the city's first unofficial slogans was City Beautiful, which was chosen in 1914 in a contest put on by the Edmonton Industrial Association, with a hefty prize of $50 in gold. The 1928 slogan "All Together For Edmonton," which was so hated by the aforementioned letter writer, was chosen from about 14,000 suggestions. (Of course, the letter argues Edmonton's tagline "cannot compare for a moment" to the B.C. capital's "Follow the birds to Victoria." So one might question the writer's own taste.)

The opening of the City Centre Airport in 1929 cleared the runway for one of Edmonton's best-known slogans: Gateway to the North. The nickname came about with the increased air traffic to northern Alberta, Yukon, and the Northwest Territories, and was later bolstered by the airfield's role in providing supplies to the Soviet Union and Alaska during the Second World War.

Since then, the city has tried on a seemingly unending number of identities. Only one has ever been actually sanctioned by the City of Edmonton, which decided in 1947 that "The Oil Capital of Canada" would be the city's official slogan. But community boosters, trade groups, and others have suggested endless other identities, ranging from "Crossroads of the World" to "The Heart of Canada's Great North West" to the "Top of the World."

Some of the city's nicknames have been bigger targets for ridicule than others, such as the "Official Host City for the Turn of the Century" in the 1980s or the Edmonton Chamber of Commerce's attempt to make"Turning Up The Heat" catch on in 1994.

And, of course, there is the "City of Champions." While never an official city slogan, the entrance signs on Edmonton's city limits bore the famous tagline for 30 years. While City of Champions was initially used to refer to Edmonton's sports success in the 1970s and '80s, its real power came after Mayor Laurence Decore used it to describe the volunteers who stepped up after the devastating 1987 tornado.

The past few decades have seen Edmonton pull away from using slogans and nicknames to try to establish its identity. The old "City of Champions" nickname was pulled off signs in 2015. In 2012, the Make Something Edmonton task force, which was focused on building the city's reputation, declared city slogans were an outdated concept. That said, it did inspire the "wall of encouragement" on Melcor's 100 Street Place Building, which declaims in giant letters Take a risk. It's the most Edmonton thing you can do.