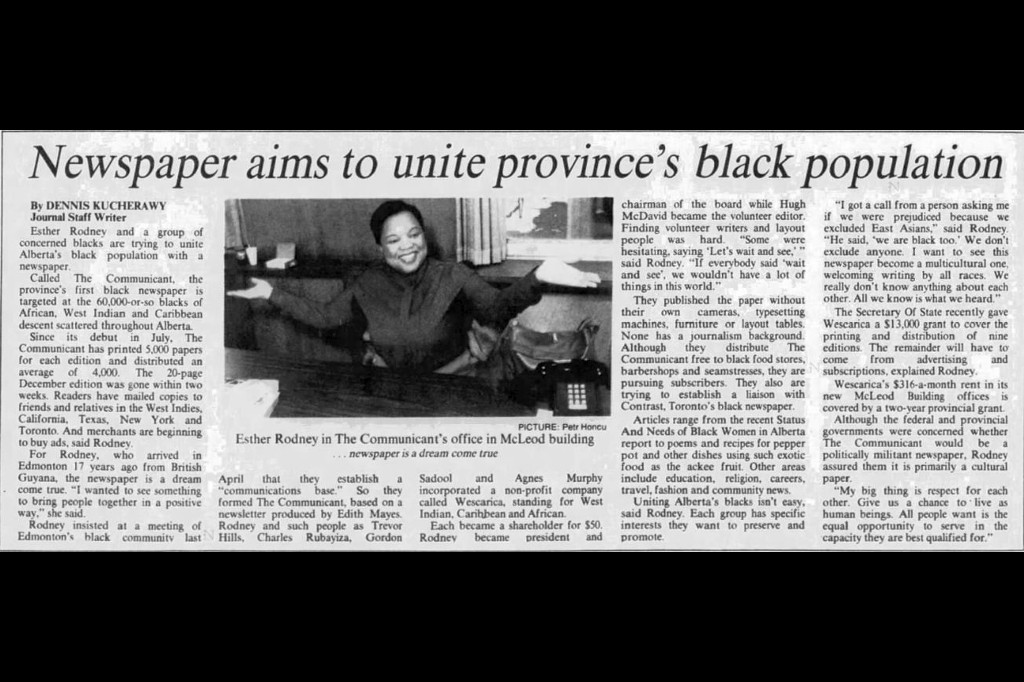 On this day in 1984, the first newspaper focused on Edmonton's Black community got some ink.

The Communicant was founded in July 1983 by a collection of community groups, including the Ghana Friendship Association of Edmonton. Headquartered in the McLeod Building downtown, the paper aimed to tell the stories and share the voices of Edmonton's West Indian, Caribbean, and African communities.

For most of Edmonton's history, the stories of those groups were told almost exclusively in white-dominated publications, which often reflected racist viewpoints. The earliest Black settlers to the city came in the 1900s, mostly from the United States. In 1907, Oklahoma gained statehood, and many African-Americans faced violence, discrimination, and loss of property. Many moved north, hoping to find a more tolerant atmosphere north of the 49th parallel. Instead, what they found was a form of discrimination that may have been less explicit but was no less present.

Edmonton's newspapers played a prominent role in discouraging Black immigration to Alberta. New arrivals were announced with barely veiled trepidation, and crime stories involving Black citizens were given undue attention. One Edmonton Journal cartoon from 1911 highlights the coded ways that local media tried to discourage Black immigration, clothing racist attitudes in concerns that the climate was too cold and foods too unfamiliar for Black families from the United States.

So it is a bit of a surprise to learn that in the 1920s, both the Edmonton Journal and Edmonton Bulletin would start publishing a weekly column about Edmonton's Black community written by a member of it. Rev. George W. Slater Jr., pastor of the Emmanuel African Methodist Episcopal, would detail social events and other news about the Black communities in and around Edmonton. The column gave the papers' mostly white audiences a more balanced view of their Black neighbours and served as a predecessor for publications like The Communicant.

Despite getting its start with no printing press, cameras, or other newspaper hallmarks, the Communicant was able to publish at least 20 issues between 1983 and 1986, which are now held by the Provincial Archives.

It's been nearly 40 years since The Communicant was first published, but equality in media representation and access is still a problem. Still, Alberta is home to more media organizations aiming to amplify Black voices, including Melanistic Magazine, Is This For Real?, Ladies Corner, and Diversity Magazine. More attention has been given in recent years to the contributions of Black immigrants from the Caribbean, United States, Africa, and elsewhere, much of which will be highlighted in February during Black History Month.