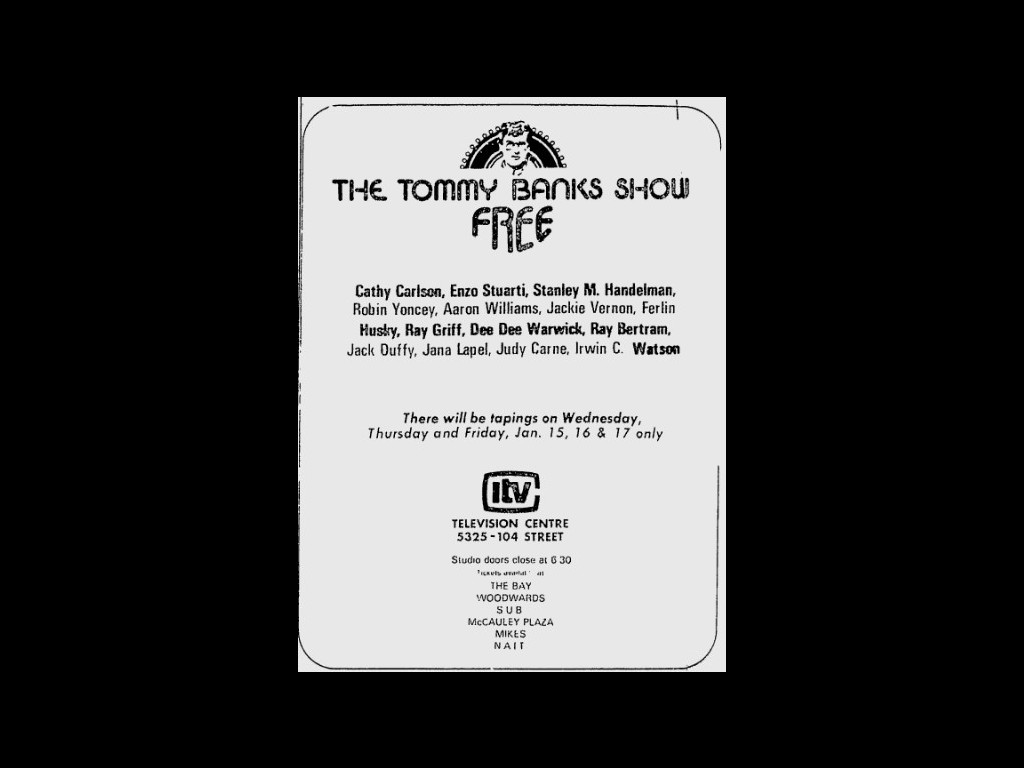 On this day in 1975, audiences were invited to free tapings of The Tommy Banks Show.

When Banks was born in Calgary in 1936, entertainment was already the family business. His grandfather was in vaudeville. His father worked in a pit orchestra, and his mother was a dancer (who later would become a TV host). The family moved to Edmonton when Banks was a boy, and he soon fell in love with the city's music scene.

By 14, he was a professional musician. By 18, he was the coordinator of the Edmonton Symphony Orchestra. He became an integral part of Edmonton's live music scene. In the 1960s, his band, Tommy Banks and the Banknotes, was signed on for a successful tour across Nevada. Despite an offer of a contract for full-time work in Las Vegas, Banks returned to Edmonton to continue his career.

He regularly played at the Yardbird Suite and continued working with the symphony. He also became a broadcaster, starting a decades-long relationship with CKUA and hosting a national show on CBC Radio. This would lead to countless offers and opportunities in other cities. Friends say he would respond to these offers with "we're going to do that, but we're going to do it here."

In 1968, Banks began hosting The Tommy Banks Show on CBC. The network demanded that he move to Toronto to produce the show. Banks refused. Eventually, the network relented, and Banks produced the show out of the University of Alberta, making it the first national TV show to be made in Edmonton. It would run on the network for five years before moving to ITV.

His jazz and piano recordings were hits worldwide. He won Juno and Gemini awards for his music and TV work, respectively. He also served as a musical coordinator for many international events, including the 1978 Commonwealth Games in Edmonton and Calgary's 1988 Winter Olympics. In 2000, he was appointed to the Canadian Senate, where he served for 11 years.

Banks played for royalty and the Pope, and his music was enjoyed by audiences around the world. But his greatest legacy is how he helped grow Edmonton's cultural scene. He served as an instructor and head of the music program at what is now MacEwan University, helping to train a new generation of musicians. Banks was also a philanthropist, founding the Alberta Foundation for the Performing Arts and serving on boards for non-profits like CKUA.

Banks passed away from leukemia in 2018. But his musical and cultural impact is still felt in Edmonton. The family tradition of music continues with his granddaughter, jazz artist Mallory Chipman. And the Yardbird Suite — the club where Banks spent so many nights on stage — recently celebrated its 65th anniversary. It is now located a few blocks north of Whyte Avenue, at 11 Tommy Banks Way.

Correction: This piece has been updated to reflect that the Yardbird Suite is north of Whyte Avenue.