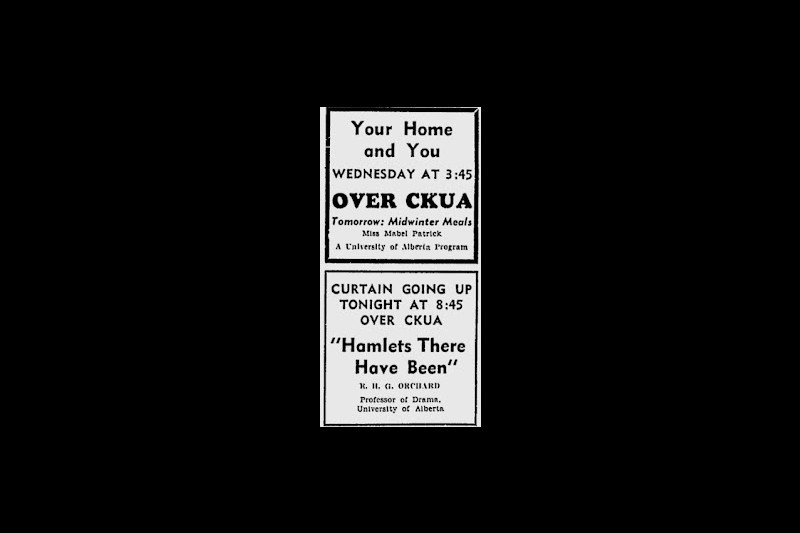 On this day in 1949, CKUA was broadcasting cooking lessons and drama lectures out of the University of Alberta.

Canada's first licenced radio station started regular broadcasts in Montreal in 1920. A little more than a decade later, there were 77 stations transmitting in cities across Canada, carrying everything from music to sports to radio dramas.

But H.P. Brown saw radio's potential to provide education rather than just entertainment. As a supervisor at the University of Alberta's faculty of extension, he wanted to see if the radio could allow academia to reach beyond campus.

On Nov. 21, 1927, CKUA sent its first broadcast from the basement of the Power Plant Building. The station's call letters were chosen to represent their connection with the university — C for Canada, UA for University of Alberta, and K ... because it is an easy letter to pronounce.

University higher-ups viewed the station with skepticism. Funding was tight, and the studio was furnished with things scavenged from other departments. While the station only broadcast eight hours a week, it was a mix of programming that people couldn't find anywhere else — lectures from professors, debates, symphonies, and programming geared towards women. Audiences tuned in, and support for the station grew.

Eventually, it was given adequate facilities and enough funding to remain stable. It expanded to a floor that included a concert room, a control room, and other much-needed facilities. It bumped up its broadcast time to 40 hours a week by the early 1930s, adding science programming, language lessons, and other educational offerings.

In 1945, the station came under the control of Alberta Government Telephones, although it kept its relationship with the university and continued producing educational programming. In 1955, the station moved again, this time off-campus to the Alberta Block on Jasper Avenue. It would continue there for nearly 60 years before settling in its current home, the reconstructed Alberta Hotel.

From a shaky start, CKUA would grow into an Alberta institution broadcasting from 16 frequencies across the province. While no longer part of the university — its journey from government ownership to non-profit status is a full tale in itself — it endures as a source of unique programming, and celebrated its 95th anniversary in November.