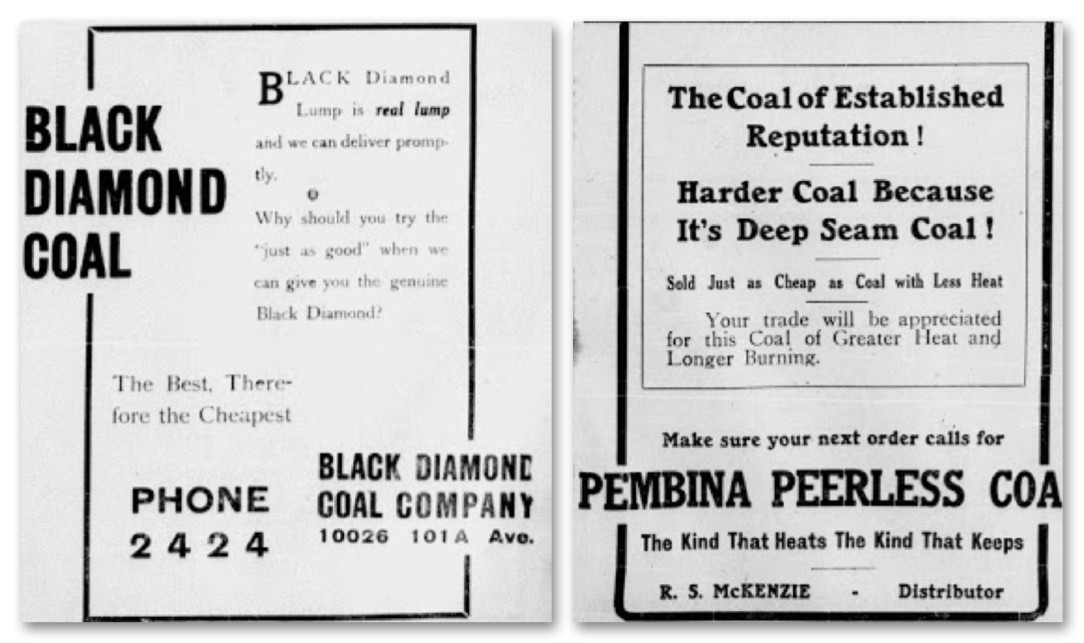 A hundred years ago, coal companies were vying for business from Edmonton households with newspaper ads like this.

The coal from the Black Diamond Coal Company would appear to be of the homegrown variety — the mine was near where the Strathcona Science Park is now located. It was one of more than 50 mines operating along the Clover Bar seam underneath Beverly between 1900 and 1950.

Pembina Peerless Coal, on the other hand, was mined near Evansburg, where the coal was apparently of higher quality. This ad doesn't trumpet the coal's provenance, but the company went to great pains to assure customers in the Roblin Review in Manitoba that the coal was not mined in Edmonton but rather 70 miles west. Evansburg was founded in 1907 by Harry Marshall Erskine Evans, who was mayor of Edmonton in 1917.

Coal ceased to be used much to heat homes by the middle of the 20th century, but remained in use industrially. Natural Resources Canada says 7.4% of Canada's electricity is generated with coal, with the goal to get to zero by 2030 as part of our commitment to reduce greenhouse gas emissions. The current controversy over opening the Eastern Slopes to open-pit coal mining is for metallurgical coal, used to produce steel.

This clipping was found on Vintage Edmonton, a daily look at Edmonton's history from armchair archivist @revRecluse.