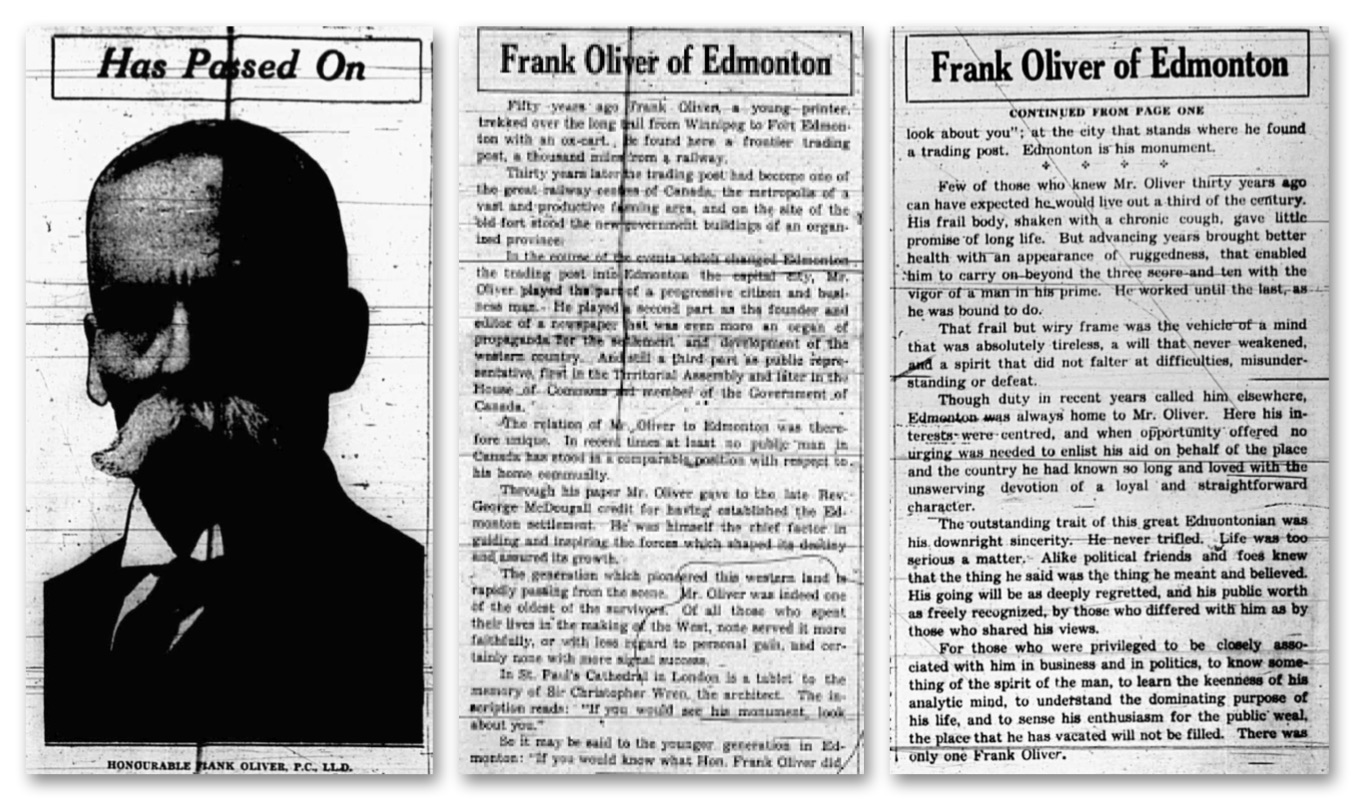 On this day in 1933, newspapers lamented the death of Frank Oliver, the publisher, politician, and namesake of one of the city’s oldest neighbourhoods. “Edmonton is his monument,” states this obituary.

Four years after arriving in the then-tiny settlement of Fort Edmonton in 1876, he published the first edition of the Bulletin (later Edmonton Bulletin), the first newspaper in what would eventually become the province of Alberta, and a source of tireless boosterism for the interests of the fledgling city and the West's interests in Canada. His advocacy for the region continued after he entered politics, first elected to the Northwest Council, and later to the House of Commons. In 1905, he was made Minister of the Interior. His advocacy for Edmonton and the hand he had in drawing its electoral districts are said to have been key to the decision to name the city Alberta's capital.

Oliver’s legacy is seen much differently now. While he spent much of his life encouraging immigration to Canada, especially the West, he was very particular as to what kind of people he wanted to see: white and British. Oliver had vicious words for anyone who did not fit that category. And in a country that already had a history of racist immigration policy, Oliver made the system more strict, more exclusive, and more cruel.

His attitude towards Indigenous people was no better. As the publisher of the Edmonton Bulletin, he had argued for reserve lands to be sold off and used for development. As the Minister of the Interior, he was able to make that happen, coercing Indigenous people to surrender more than a dozen reserves and offering pittances in return. (In contrast to the glowing obituary he received, which lauded his “straightforward character,” Oliver had a habit of making sure those lands ended up in his hands and those of his allies for much less than they were worth.) In his role, Oliver also oversaw Canada's residential school system, although he had previously opposed the idea on the grounds that he considered education to be wasted on Indigenous students.

Oliver’s racist policies have led to many to demand changes to the places that still bear his name. Last year, the Oliver neighbourhood’s own community league called on the city to drop his name. Around the same time, the Edmonton Public School Board voted unanimously to rename Oliver School.

Written by Scott Lilwall, based on a clipping found on Vintage Edmonton, a daily look at Edmonton's history from armchair archivist @revRecluse — follow @VintageEdmonton for daily ephemera via Twitter.