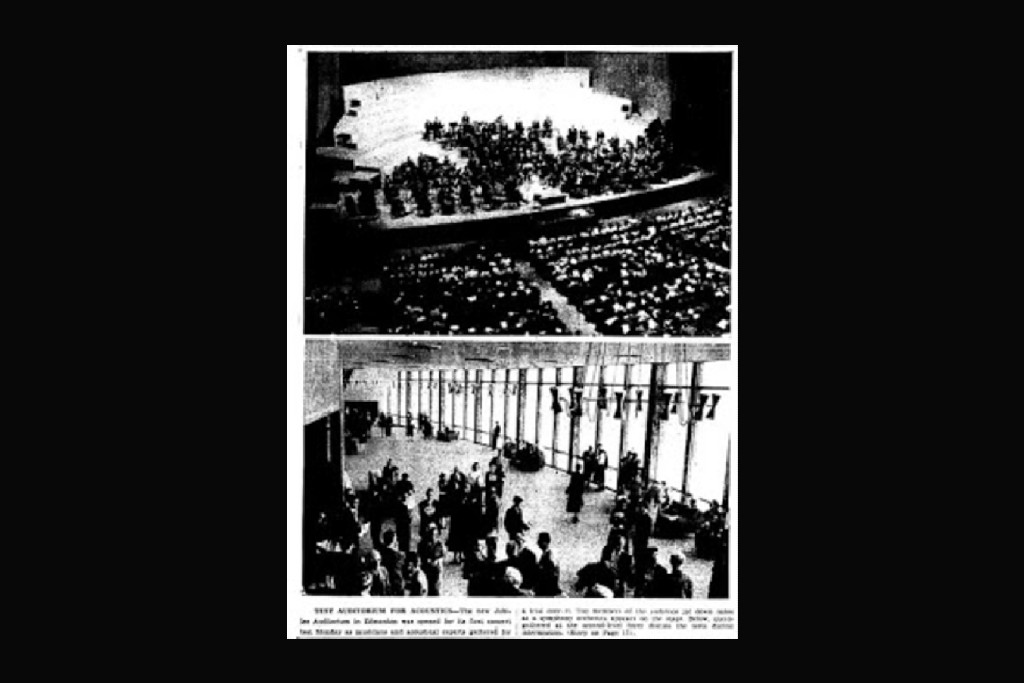 On this day in 1957, concert lovers were getting the first reviews of the acoustics at the brand new Northern Alberta Jubilee Auditorium. More than 1,500 music students and audience members had gathered that week for the final music test at the new performing centre, including a 100-piece orchestra and 180 singers.

The Northern Alberta Jubilee and its southern counterpart in Calgary broke ground in 1955 to mark the province’s 50th anniversary. Then premier Ernest Manning said the growing cities were in dire need of cultural facilities and the new venues would help Albertans develop an "expressive cultural life."

Since its opening, the Jubilee has seen countless productions, hosting everything from Broadway shows to rock concerts to standup comedy. It’s also been the site of two royal visits — Queen Elizabeth II came for the opening ceremonies of the 1978 Commonwealth games, while Prince Charles and Princess Diana visited in 1983.

While both the Edmonton and Calgary auditoriums were built using the most advanced techniques of the '50s, both venues were beginning to show their acoustic age by the turn of the century. In 2005, the Northern Alberta Jubilee underwent a $91-million renovation aimed at improving the sound quality

While the theatre was listed as the busiest theatre in Canada back in 2010, the coronavirus has obviously affected the Jubilee’s performance schedule. However, the venue has managed to adapt to the pandemic with ideas such as Edmonton Opera's Drive-In Opera series, which has musicians and vocalists performing inside inflatable plastic bubbles on the building’s roof while the audience tunes in on FM radio.

This was based on a clipping found on Vintage Edmonton, a daily look at Edmonton's history from armchair archivist @revRecluse — follow @VintageEdmonton for daily ephemera via Twitter.