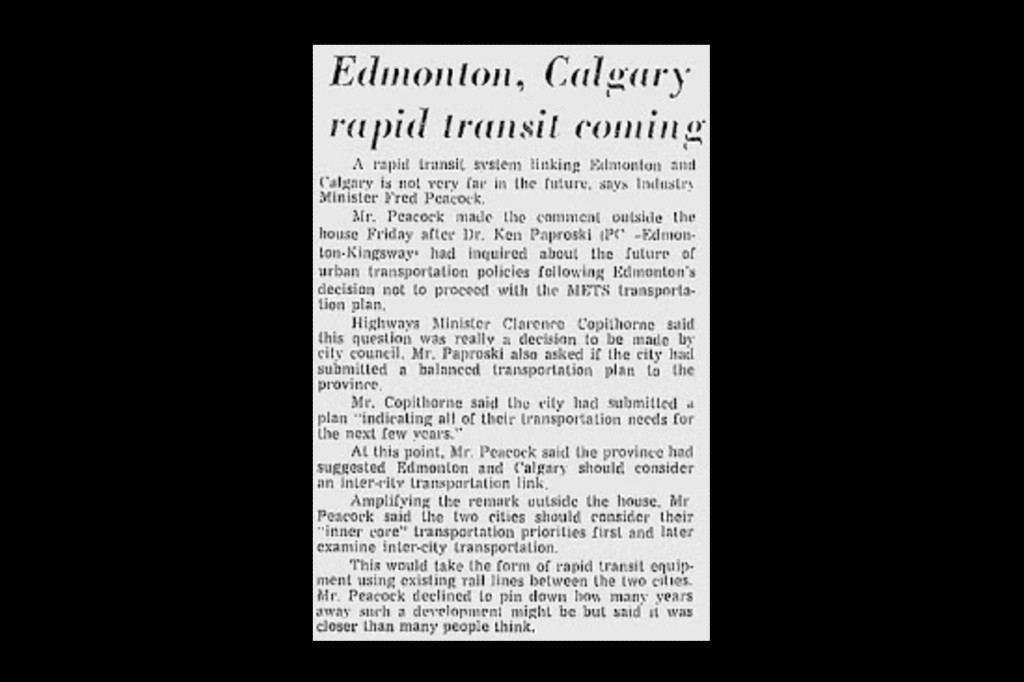 On this day in 1972, Alberta’s industry minister was predicting a rapid transit system would soon link Edmonton to Calgary.

Minister Fred Peacock made the comments in the legislature following questions on the future of transportation policy after Edmonton rejected its brazen METS plan, which would have seen a web of freeways built throughout the city.

Peacock said there was no definite timeline for rapid transit between the cities, but that it was “closer than many people think.”

Those words weren’t exactly prophetic. For the past 50 years, a high-speed transit line linking Alberta’s two biggest cities has been sort of like the horizon while driving down the QEII — it is always in view, but never actually gets closer.

The first study into the idea came in 1985, which concluded that the project would be feasible, would benefit the province, and could be run privately with little ongoing public support. A similar report from 2004 estimated between $3 billion and $6 billion in benefits if the cities were linked, noting that the trip would have to take a maximum of two hours to attract the ridership it needed. In 2011, Alison Redford hinted that it could be built using money from the province’s GreenTRIP fund. But by the provincial election next year, the idea wasn’t high up on anyone’s priority list.

Half a dozen feasibility studies have been done over the past 50 years, each triggering a flood of editorials and think-pieces. Each time the idea is floated, it garners just as much opposition as it does support, with critics citing cost, environmental impacts, and greater need to invest in city-based transit.

The latest movement on the idea happened last August, when the Alberta government signed a memorandum of understanding with a Toronto company to examine the idea of a hyperloop system that would launch passengers and freight up to 1,000 km/h, cutting the trip between Edmonton and Calgary to about half an hour. The deal doesn’t commit any funding from the province, but it does represent the latest stop on Alberta’s perpetually imminent high-speed system.