Pacylex CEO Michael Weickert told Taproot that the Phase 1 clinical trial is set to begin anytime between May and June at three Canadian sites: the Cross Cancer Institute in Edmonton, the British Columbia Cancer Research Center in Vancouver, and Princess Margaret Cancer Centre in Toronto.

"The approval (from Health Canada) starts the process of getting site approval. Now we need to get the clinical sites up and ready to enroll patients, get them proper training, supplies, and materials," said Weickert. "This is why it takes several months from the time you get Health Canada's approval until you can actually start giving the drug to patients."

PCLX-001 is a small molecule that is designed to kill cancer cells by targeting enzymes involved in myristoylation, a process key to the cell signaling system that is often defective in cancer cells. The molecule was originally developed by the University of Dundee as a treatment for African sleeping sickness.

"This would be a new kind of cancer medicine. We don't have anything like it already in the pharmacy," said Pacylex’s Chief Medical Officer Dr. John Mackey during a recent U of A webinar. 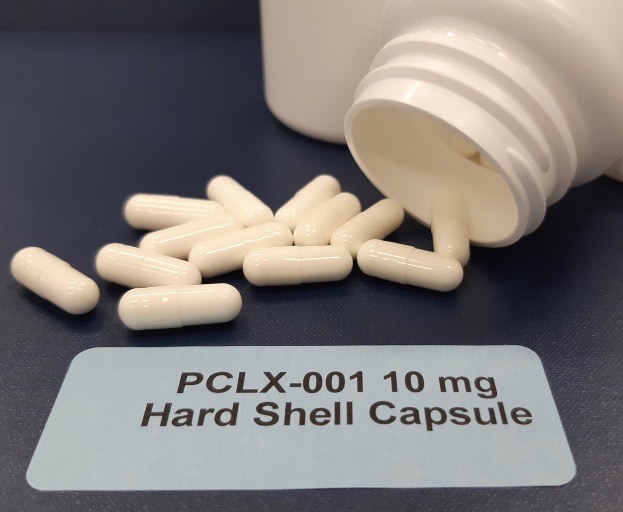 "When we look at PCLX-001’s non-clinical safety and non-clinical efficacy profile, it is really good," said Mackey, who is also a medical oncologist at the Cross Cancer Institute. "In addition to the fact that it's working, there's also the fact that it is not an intravenous therapy. It's simply a pill."

According to Weickert, the purpose of the Phase 1 clinical trial is to establish the optimal dose of PCLX-001 for effectiveness and safety before running into side effects.

"You start with a low dose, and then if there are no serious side effects, you go up to the next dose. We keep increasing the doses in that initial study until we reach a dose that we believe would be beneficial," Weickert told Taproot.

"The end of Phase 1 clinical trial is when we determine the dose necessary for the rest of the clinical program, which will be focused on how much efficacy and effectiveness we can deliver to cancer patients."

According to the Canadian Cancer Society, cancer is the leading cause of death in Canada, with 228 people dying from the disease every day. Pacylex's drug has shown great promise in treating different types of aggressive cancer.

"While our drug really works at inhibiting the growth of breast cancer, lung cancer, and colon cancer, it is actually remarkable at killing blood cancer cells," said U of A cell biologist Luc Berthiaume, who was the first to realize the molecule could work against cancer.

More than $1.8 million was also raised for the company's research by a group of hockey players in Sherwood Park, at the World's Longest Hockey Game.