“It's about accelerated and transformational change. This change will reimagine our energy systems and will transform our community and economy,” said Chandra Tomaras, the city's environmental project manager.

“There are 105 actions with various impact levels and funding requirements. The targets are our boldest to date. This plan is the first of its kind for Edmonton, and it's the first time Edmonton has targets aligned with the Paris Agreement.”

The revised Community Energy Transition Strategy was prompted by the city declaring a state of climate emergency in 2019, which included a request for city administration to re-examine “how to achieve a low-carbon future, to develop a funding strategy that would achieve the necessary investments in this space, and to implement a carbon accounting system for budgeting decisions and priorities,” deputy city manager Stephanie McCabe explained at a media availability on March 26. 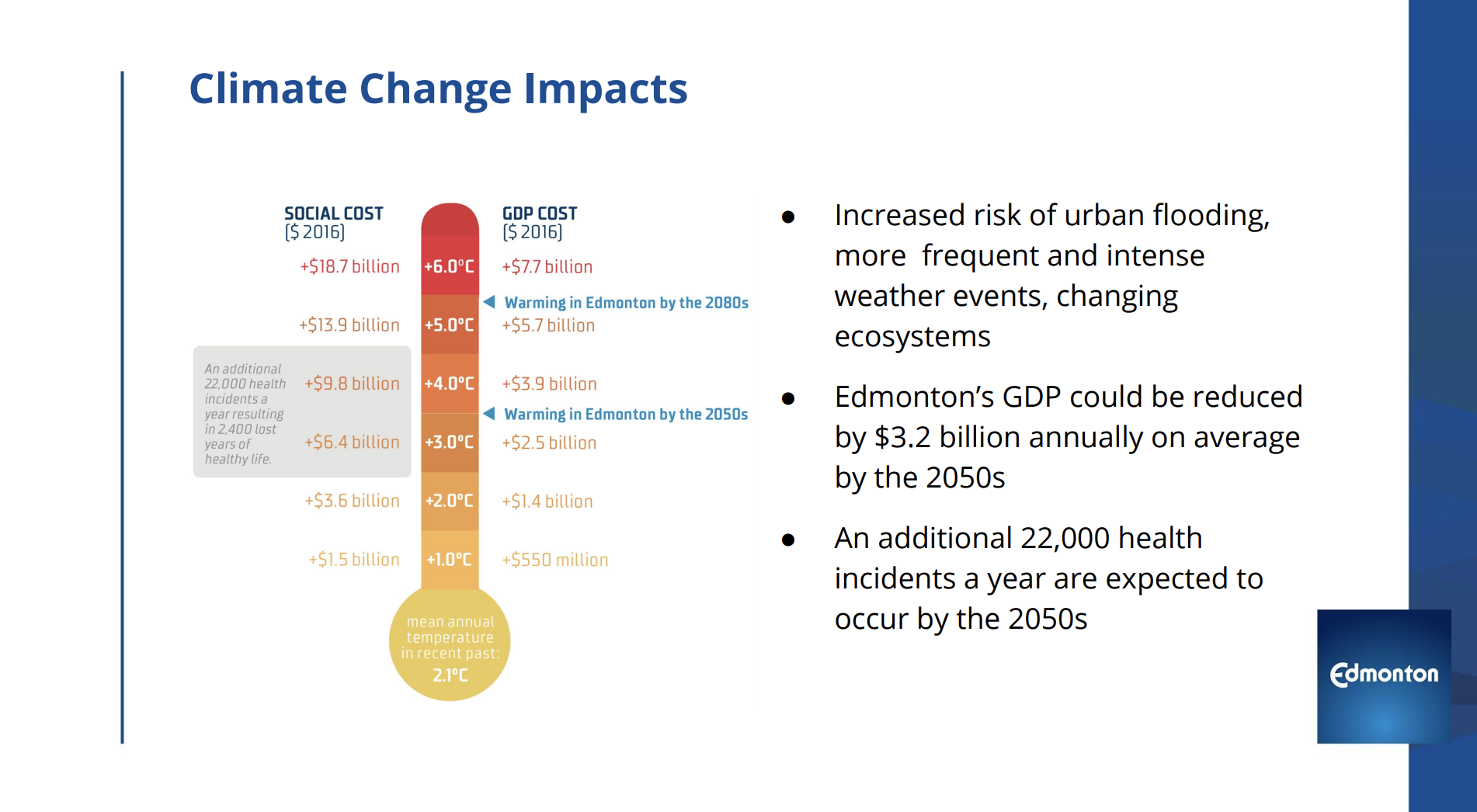 The new plan explains how the city will aim to change the energy that Edmontonians use by switching to sources like solar, wind, geothermal, renewable natural gas, and hydrogen, and generating more energy within city boundaries. The second pathway looks to shift the way people move around the city, using zero-emission vehicles and taking advantage of transit and active transportation options.

Even if the city takes action in all three areas, there will still be a 17% gap in emissions to reduce. That's why the fourth pathway, using carbon capture nature-based solutions, is necessary. It involves actively removing carbon from the atmosphere through nature-based solutions and technology. Tomaras said they believe through that technology, Edmonton will be able to attract ongoing investment and innovation.

“This is about readying for the future and making sure Edmonton is able to diversify its economy as well as have local job creation in the meantime,” McCabe said. “There's a large economic opportunity here that Edmontonians can capitalize in terms of on the ground jobs created right now.”

Project manager Tomaras said the proposed plan is achievable with public and private investment. It will require $24 billion over the next 10 years, which is 2.5% of Edmonton's regional GDP.

“The majority of this funding will be private capital investments from major industry to individual homeowners,” explained Tomaras, with a city investment of $100 million annually.

Capital funding from other orders of government will be necessary to catalyze private investment and build local infrastructure, including a continued investment of more than $300 million from the federal government through carbon tax rebates and programs.

“These are net new incremental investments over and above what is included in our current capital plans and budgets. Very few of these actions are currently funded,” Tomaras said.

While city budgets have been tight, both Tomaras and McCabe explained that the climate change strategy is about making Edmonton competitive in the long-term through diversification of the city's economy, and supporting local businesses that are moving in this direction.

The revised Community Energy Transition Strategy will be presented by city administration at an executive committee meeting on April 12.

Taproot is hosting weekly listening sessions through the end of April - the event on April 22 will be a discussion about climate change in Edmonton. The sessions were prompted by Taproot's People's Agenda, a document that’s being compiled based on responses to this question: What key issue do you want the candidates to talk about as they compete for votes in the 2021 municipal election, and why?