"Menstrual pads that are on the shelves normally take up to 800 years to biodegrade. With us not using plastic, that speeds up the process," she said.

Ruth's pads are made from natural materials including kenaf fibre, wood pulp, and a corn-based waterproof backing layer.

The company, previously known as Hempact, started as a University of Alberta project by Sanchez and Anka Chan in 2018. Last week, the product officially launched alongside a Kickstarter campaign. The company raised more than $10,000 in one week, surpassing its campaign goal of $7,000.

The campaign runs until July 22. 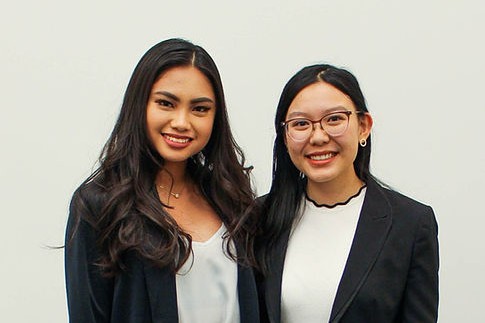 The co-founders of Edmonton's startup Ruth have launched sustainable and biodegradable menstrual pads. (Courtesy of Ruth)

In addition to creating eco-friendly products, Ruth is also raising awareness about the challenges women and girls face to access menstrual products.

"With this campaign, we partnered with a few shelters in Canada so that we can give them free menstrual pads because period poverty is something relevant but not a lot of people talk about," Sanchez told Taproot. "We want to make sure that everyone has access to menstrual products like ours."

In Canada, one-third of women under the age of 25 say they've struggled to afford menstrual products, according to a survey conducted by Plan International Canada.

Sanchez said Ruth is also negotiating with the University of Alberta Students' Union to provide the company's products for free to students.

Ruth, named after the late Ruth Bader Ginsburg, is part of the 2021 NEXT 36 cohort and recently completed the founders' program with the Western Canada Founder Institute, the largest pre-seed start-up accelerator in the world. Alberta Innovates and Community Foundations Canada have also supported Ruth.

According to Sanchez, the company is planning to launch a fundraising round by the end of the year. Ruth also aims to launch eco-friendly tampons, pantyliners and diapers while expanding its reach across Canada.