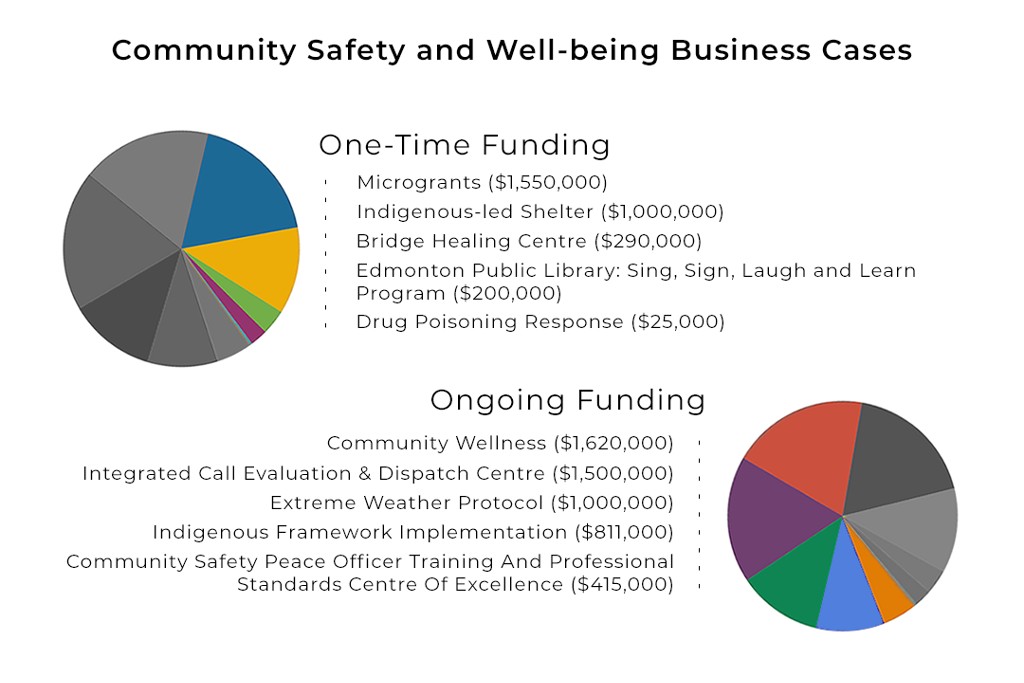 Councillors undecided on how best to spend community safety money

Members of city council's community and public services committee spent a lot of time this week debating how best to spend $8.4 million remaining from the money they diverted from a police funding increase last year.

In the end, they sent the matter to the full council — without a recommendation — to discuss on May 24.

The available funds represent the remainder of $10.9 million that was diverted from a police funding increase in an effort to explore solutions other than policing for systemic issues that lead to poverty and crime. Administration put together 10 business cases for spending that would take steps towards fulfilling the recommendations in the Safer for All report and work towards making Edmonton Canada's safest city by 2030.

Councillors raised questions about whether the money earmarked for these programs was being appropriately applied to pressing problems like the opioid crisis and social disorder downtown.

"I'm quite concerned about the $25,000 dedicated to a drug crisis," Coun. Karen Tang of Ward Karhiio said of the money allotted for drug poisoning response — the lowest amount given to any of the business cases. "If we talk about some of the causes to our social disorder, I think that's a huge one."

Some of the recommended programs are aimed at early intervention and prevention — for example, $200,000 for the Edmonton Public Library's Sing, Sign, Laugh, and Learn program.

"We were trying to be a little innovative," said city manager Andre Corbould in response to councillors' questions about whether that was an appropriate addition. "We had heard from a lot of the community and from council that you didn't want to see the same old things."

Corbould also explained that there were time constraints in determining which proposals to green-light, as there are only seven months remaining in the fiscal year, and preference was given to ideas that could immediately make an impact on the community. 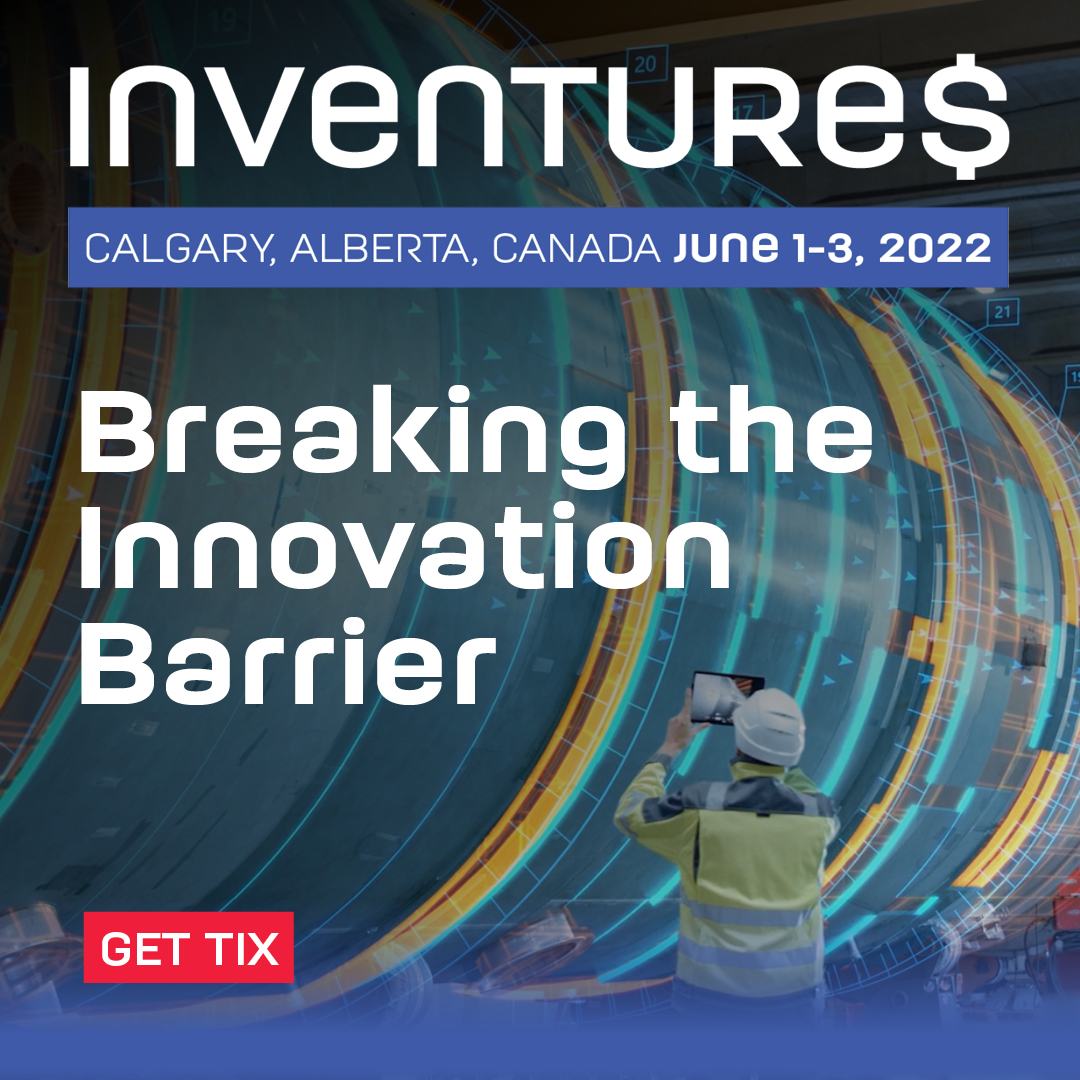 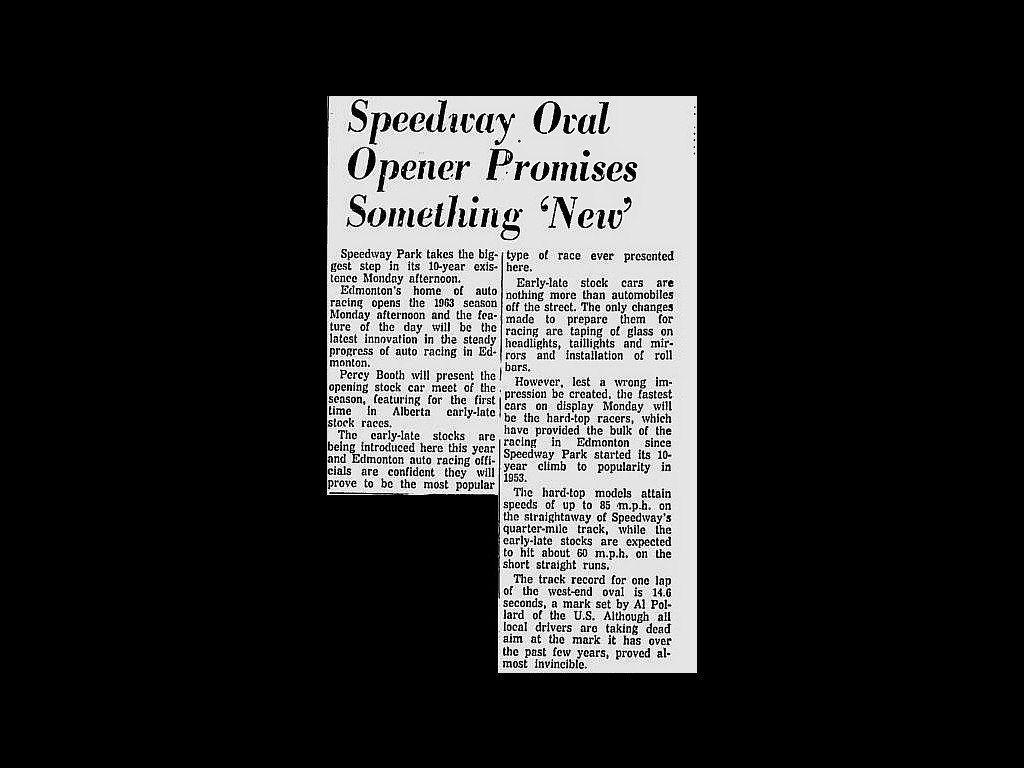 On this day in 1963, the Edmonton Speedway was prepping for the city's first stock car race.

The popularity of car racing in the Prairies started revving up in the 1950s. Faster, lighter sports cars from Europe had become easier to get in Canada. The Second World War was also a surprising contributor; many people now had mechanical skills learned from using or manufacturing military equipment. And Canada's role in training Allied pilots meant there were abandoned airbases with long, flat strips of runway that racers could take advantage of.

The city's first raceway had a modest start. Originally called the Breckenridge Oval, it was little more than a dirt circle when it first opened in the late '40s. Then, in 1952, the track was paved and shortened to a quarter-mile. The new track had a capacity of 8,000 people and was dubbed the Edmonton International Speedway.

As the excitement for racing grew in the 1960s, so did the Speedway. For the first decade, the Speedway hosted hard-topped cars designed specifically for racing. The 1963 season offered the first taste of stock car racing in Edmonton, featuring "automobiles off the street" with only a few modifications: "taping of glass on headlights, taillights and mirrors and installation of roll bars," reported the Edmonton Journal.

The Speedway would install Alberta's first drag-racing strip in 1967. (Legendary drag racer Don "The Snake" Prudhomme would set a world record on that strip in 1971.) A year after the drag strip opened, a four-kilometre road course was completed. These tracks, as well as a strong fanbase in the city, drew racers from all around the world. The Speedway would host events like the Can-Am series, Formula 5000, and Trans-Am races in the '60s and '70s. At its peak, it could hold 30,000 spectators.

The public obsession with car racing would begin to cool as the '70s drew to a close. The Speedway was eventually bought by a land development company and ultimately closed in 1982 to be converted into a residential area now known as Hudson. While the asphalt and bleachers have been replaced by houses and sidewalks, the Speedway can still be experienced on film; the track was used in David Cronenberg's 1979 racing movie Fast Company.

While nowhere near its heyday half a century ago, racing is still a draw in central Alberta. The Capital City Raceway (later the Castrol Raceway) opened south of the city in 1991. For nearly a decade, the Edmonton Indy wound through the old airport until 2012. And the Edmonton International Raceway continues to host NASCAR and CASCAR events throughout the year, with their 2022 racing season beginning at the end of this month.