It’s been almost a month since Edmonton City Council passed two back-to-back climate motions tied to the City’s efforts to reduce greenhouse gas emissions. Now, as part of Taproot’s participation in Covering Climate Now, we take a look at what comes next for a city that generates more emissions per capita than any other major city in Canada.

What happened in August

The motion directs Administration to update the transition strategy so it aligns with the steeper emissions reduction path required by the City’s commitment to the Paris Agreement, reinforced last spring when Mayor Don Iveson spearheaded the Edmonton Declaration. Over 4,500 mayors have now endorsed the commitment for municipalities to lead the way on climate change mitigation efforts.

The second motion, “that the City of Edmonton declare a climate emergency,” came as more of a surprise. It was put forward by Councillor Aaron Paquette, who announced his intention in a radio interview on the morning of the vote. Although many Edmontonians, members of Extinction Rebellion in particular, had been calling for a climate emergency declaration for months, the conversation at Executive Committee the week before had given every indication that Council was satisfied that the Edmonton Declaration conveyed enough urgency on its own. When the motion to declare an emergency passed, the smaller group of concerned citizens who had shown up to watch the council meeting burst into applause.

Edmonton’s entry into the growing network of over 1,000 jurisdictions around the world that have passed climate emergency declarations dominated the subsequent headlines about the day’s events at council.

Support was not unanimous. Councillors Mike Nickel, Tony Caterina and Jon Dziadyk voted against both motions, and Nickel said that while he believes climate change is a serious issue, he thought calling it an emergency was alarmist and unconstructive. Councillor Michael Walters, who did vote for the declaration, expressed his concern that it had pulled all the attention away from the real work associated with the energy transition strategy.

But many community members welcomed it as an effective way of recognizing the seriousness of the climate crisis and the urgent need for action. Paquette and Iveson both described the declaration in the media as a way to focus the City’s attention on the climate crisis as both an unprecedented threat and a set of new opportunities.

As global temperatures continue to increase, Edmonton can expect more fires, floods, extreme weather events such as ice storms and tornadoes, and changes to our natural environment that will bring invasive species and other hard-to-predict outcomes. The recently launched Climate Resilient Virtual Home project makes these climate impacts tangible by illustrating how we will have to adapt our buildings in preparation.

We can’t forget, either, that we’re deeply reliant on interconnected global systems that are vulnerable to climate change. As a recent IPCC report on climate change and land use warned, if we fail to keep warming below 1.5 C, the world will experience more frequent food price shocks and, above 2 C, “there will be sustained disruptions in food supplies … widespread increases in wildfire damage and detectable losses of soil and vegetation that can be attributed to climate change.”

The City of Edmonton’s carbon budget tool makes it clear how much work we have to do if we’re going to get back on track with Paris targets. The budget gives us an emissions threshold of 155 megatonnes between 2017 and 2050. But, at our current rate, we are expected to exceed that threshold by 2027, in just eight years’ time. That’s why council voted to update the energy transition strategy by the end of next year, and it’s why so many Edmontonians are anxious to see as much action as possible before then.

Here’s a timeline that will help you stay on top of the energy transition work initiated by last month’s council meeting.

Throughout this process, especially as public engagement begins, resistance from individuals and industry groups with a vested interest in the status quo is virtually guaranteed. The six big shifts described in the Getting to 1.5C discussion paper released last month include examples of ambitious policies other cities have adopted in their efforts to slash emissions. These include:

To make the necessary shifts, reducing emissions needs to be the central organizing principle of everything the City does, not just of the Energy Transition Strategy.

Although the six big shifts are ambitious enough, there seems to be a seventh shift to contend with: a cultural one. On the Sept. 13 episode of Speaking Municipally, we wondered how we’ll ever make progress on Shift #2 (Low Carbon City and Zero Emissions Transportation) when even modest commercial developments can’t get council approval in the face of public pressure.

That being said, there has never been a stronger sense of urgency around the need for climate action, and Edmonton might just have the groundswell of people needed to make that cultural shift happen.

Most Canadians now recognize that climate change is a problem and, while Albertans are more likely than people in any other province to deny climate science, that isn’t true in Edmonton, where seven in 10 people are concerned and agree that we need to take action now.

Hundreds of people are expected to join Edmonton’s General Strike for Climate Action, planned for Sept. 27 as part of the Global Climate Strike Week that kicks off on Sept. 20. 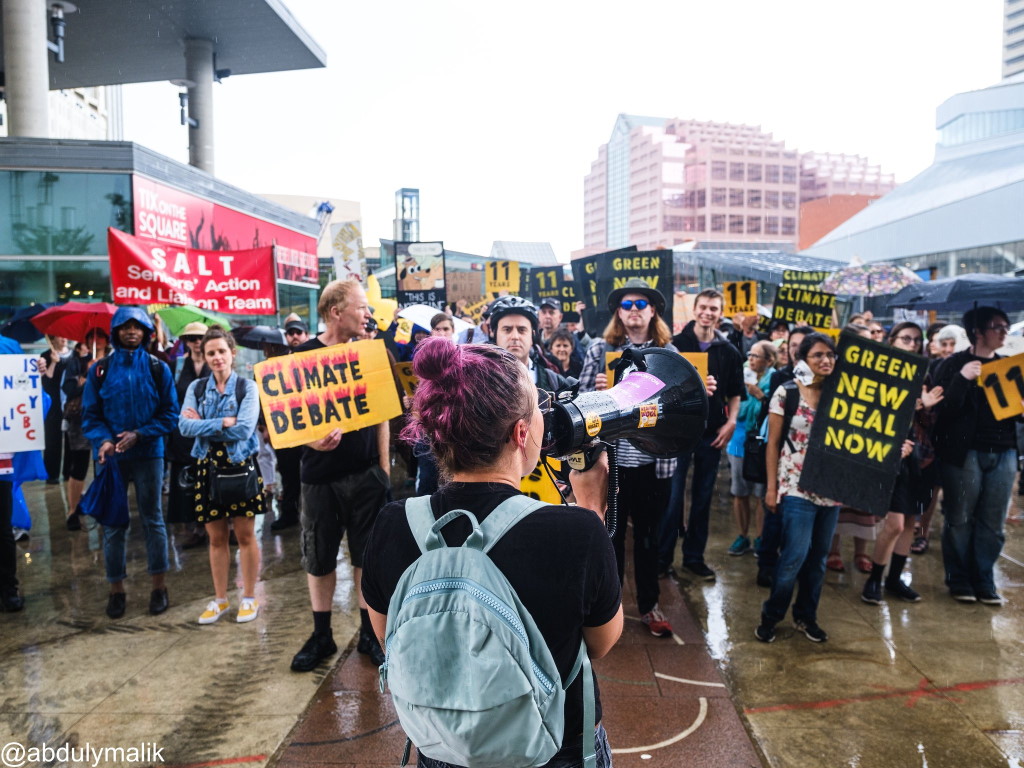 Groups like Climate Justice Edmonton, Beaver Hills Warriors, Edmonton Climate Hub, Edmonton Youth for Climate, and Extinction Rebellion Edmonton keep drawing new people into the climate movement, exposing them to the idea of a just transition away from fossil fuels and helping them take meaningful action.

What you can do

Here’s how you can get involved: