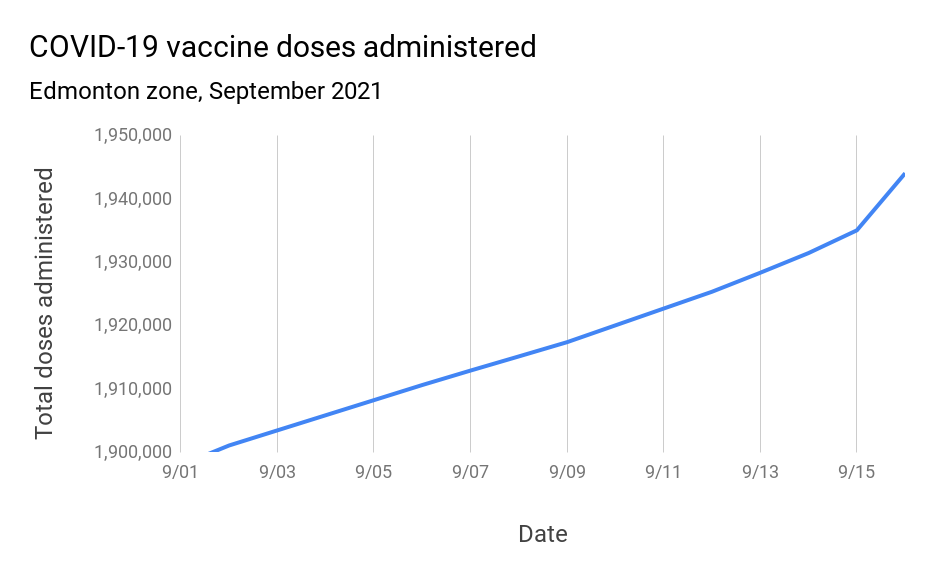 Alberta's optional vaccine passport system didn't come into effect until Sept. 20, but the Edmonton health zone experienced a spike in vaccinations the day after the program was announced, according to data from Alberta Health Services via the Edmonton Open Data Catalogue.

New restrictions were announced on Sept. 15 after weeks of rising cases and increasing public pressure. The provincial government called its proof-of-vaccination system the Restrictions Exemption Program, allowing non-essential businesses to operate as usual if they require customers to show proof of vaccination or provide a negative COVID-19 test.

Alberta Health Services reported that demand for vaccine doses tripled across the province on Sept. 16 following the news. Up until the passport was announced, the Edmonton zone was averaging around 2,400 doses a day in September, but that number shot up to 9,009 on Sept. 16 — the most doses given on a single day since late July.

The province also announced it would reward Albertans with a $100 debit card for getting a dose earlier this month, which appears to have not had a huge effect on vaccinations in the Edmonton zone.

While it's difficult to predict whether higher vaccination rates will continue, many in Edmonton have also noticed busier pharmacies in the days since the passport program was announced.