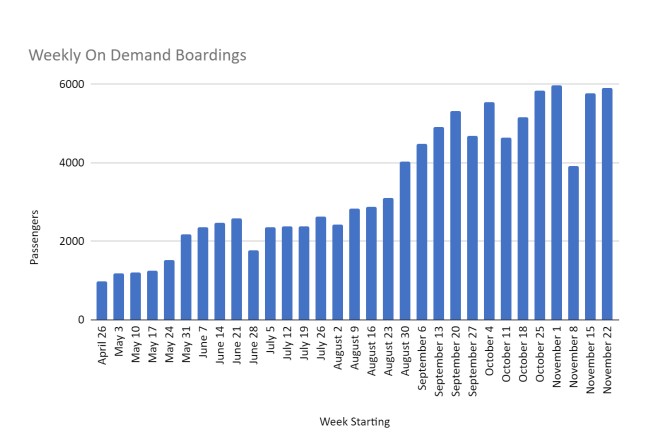 An interim review of the bus network redesign shows growing use of on-demand transit since it was introduced last April to mitigate a decrease in regular service to parts of the city.

A report to be received by city council's executive committee on Jan. 19 indicates that weekly boardings grew to almost 6,000 per week by Nov. 22. The service allows users to book a trip on a shuttle through an app or telephones at some transit centres.

On-demand service is available in 37 neighbourhoods and at 16 seniors' residences, with an aim to provide "the right amount of service for areas that typically have lower demand, or are geographically isolated." So far, the neighbourhoods with the greatest demand are Westridge-Rio Terrace-Quesnell Heights in the west end; Hope Road-Edgemont on the western edge; Big Lake-Northwest Industrial; Cavanagh in the far south; and Avonmore-King Edward Park-Kenilworth in the southeast.

Another report is expected in the late fall examining whether the on-demand service should transition from delivery by a contractor to being a fully public service.

The bus network redesign put in place in April 2021 was the first major revision of the transit map since 1997. None of the candidates elected to city council the following October felt that it struck the right balance between frequency and coverage, according to their answers to the Taproot Survey. More than 50 service adjustments have been made since the launch, says the report, which notes that ridership has dropped significantly due to COVID-19 but is currently at its highest level since the initial pandemic restrictions in March 2020.