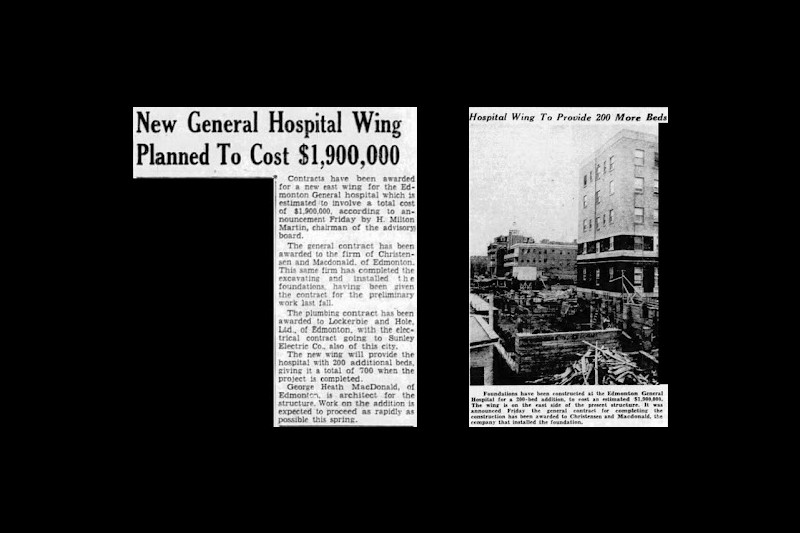 On this day in 1951, the foundation had been laid for a $1.9-million expansion of the Edmonton General Hospital.

Before the Edmonton General opened its doors in 1896, Edmonton was without a hospital. Anyone in need of treatment would need to travel to St. Albert, where the Grey Nuns operated a facility. But with the construction of a railway linking Calgary to South Edmonton in 1891, more people came to live on both sides of the river. Soon, the travel between St. Albert and Edmonton was deemed a hardship for both physicians and patients, writes Pauline Paul in her thesis on the history of the General.

A handful of doctors petitioned Bishop Grandin of the Diocese of St. Albert to build a hospital in Edmonton. Initially, he opposed the idea, but he changed his mind a few months later. Around 850 people, representing more than 80% of Edmonton's population at the time, signed a petition calling for the town to provide some funding towards a new hospital.

The Hudson's Bay Company sold the Grey Nuns a patch of land on Jasper Avenue for the original hospital, which cost about $30,000. The three-storey facility included an operating theatre, employee quarters, isolation rooms and two seven-bed wards. The land also contained a small farm, with at least one hospital cow, to provide food.

The hospital's early years were marked by tension between the religious and medical sides of the hospital. The Grey Nuns had final say over all hospital matters. However, many of the doctors demanded more control, particularly over the admission of patients. It led to a very public battle, leading to the eventual resignation of some doctors and the establishment of the Edmonton Public Hospital.

As the city grew, so did the General. It was expanded in 1907, and the hospital added a School of Nursing the following year (it would stay until moving to Grant MacEwan College in 1972). A second expansion and renovation happened in 1921.

In the 1930s, tuberculosis cases were on the rise. Soon, the number of TB patients at the Edmonton General left few beds for those who needed acute care. In 1940, a five-storey expansion added another 100 beds. Still, within a year, patients were being turned away due to lack of space. A temporary 60-bed ward was established in 1948. The 1950s expansion added another 200 beds and provided more modern care than some of the older wards in the hospital.

The building's time as a hospital came to an end in 1989, after the construction of the Grey Nuns Hospital south of the river. The acute care beds at the downtown facility were transferred to the new hospital, and the General was converted into a continuing care centre. It continues to offer long-term and hospice care under the administration of Covenant Health.

Edmonton now has nine hospitals, offering different types of care. However, the need to expand to meet rising demand is still an ever-present concern — the Misericordia Community Hospital is building a new emergency department that is slated to open next year. Construction is also underway on an additional continuing care centre in Norwood, also planned for 2023.