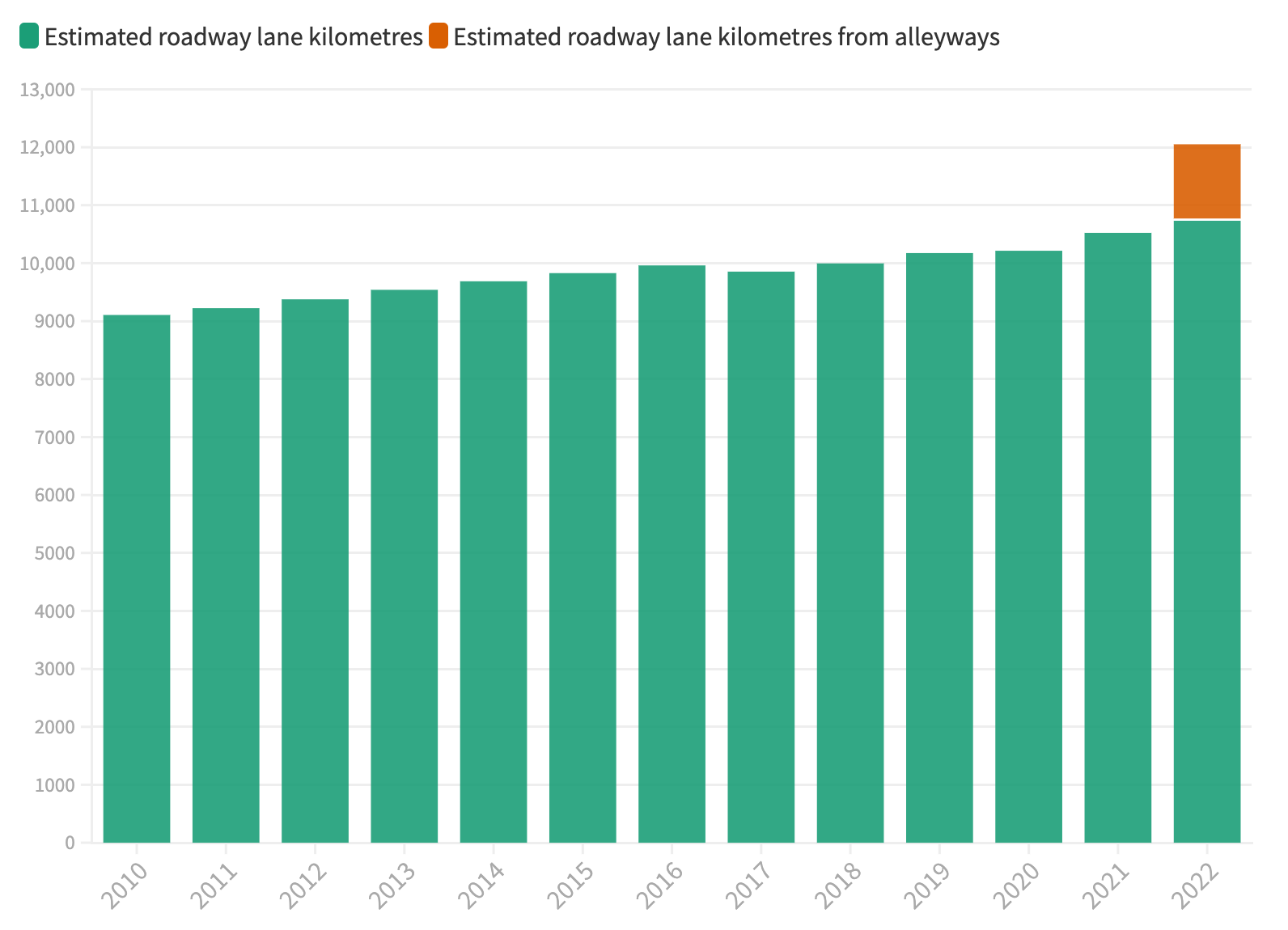 Earlier this year, city administration reported that the snow removal budget had gone down 14% since 2017, while during the same time there was a 21% increase in roadway lane kilometres being serviced. But how has Edmonton added a fifth of its lanes to the network in a single budget cycle?

The answer has more to do with what is being counted than with how Edmonton has grown.

New neighbourhoods and annexations do account for some of the extra distance. Another factor is the use of more accurate monitoring measures and the manual evaluation of lane length completed for the 2022 Snow and Ice Control report. Where data is not available for a road segment, the city relies on a default minimum for its estimates, causing some variance in yearly reported totals.

However, the largest contribution to the increase, is not new roads but existing alleyways that were only recently included in these figures.

"As of the August 2021 Snow and Ice Policy update, alleys are now being recorded as they receive maintenance with residential clearing cycles. Previously they were not a part of the totals," Travis Kennedy, acting director of infrastructure operations, said in an email to Taproot.

Including alleyways in their reporting added 1,250 to 1,300 kilometres to the city's inventory of roads and active pathways, Kennedy estimated. Although the 21% increase since 2017 does not indicate a dramatic addition of new roads, city officials told council that crews are overburdened by existing service expectations for snow removal and staff shortages caused by budget cuts.

"Due to not having enough staff, we were only able to use an average of 57 trucks after a snow event," deputy city manager Gord Cebryk told the community and public services committee on April 25. "That's equivalent to a 43% utilization of our entire inventory of vehicles."

To address this, city operations proposed establishing new service standards – how much snow is expected to be cleared and how quickly – and increasing funding for crews and equipment. One option given would see $42 million added to the current base budget and adjusted service standards to match available resources. The second option would bring snow and ice removal in line with the current service standards, requiring an additional $106 million to do so.

Funding decisions will be made as part of the 2023–2026 operating and capital budgets in November.

Chart: Estimates for the years 2010 to 2021 come from Travis Kennedy, acting director of infrastructure operations. The 2022 figure is taken from the snow and ice control report presented to committee in April 2022, with the orange block representing the estimated addition of lane kilometres from alleys that are now included in the total.