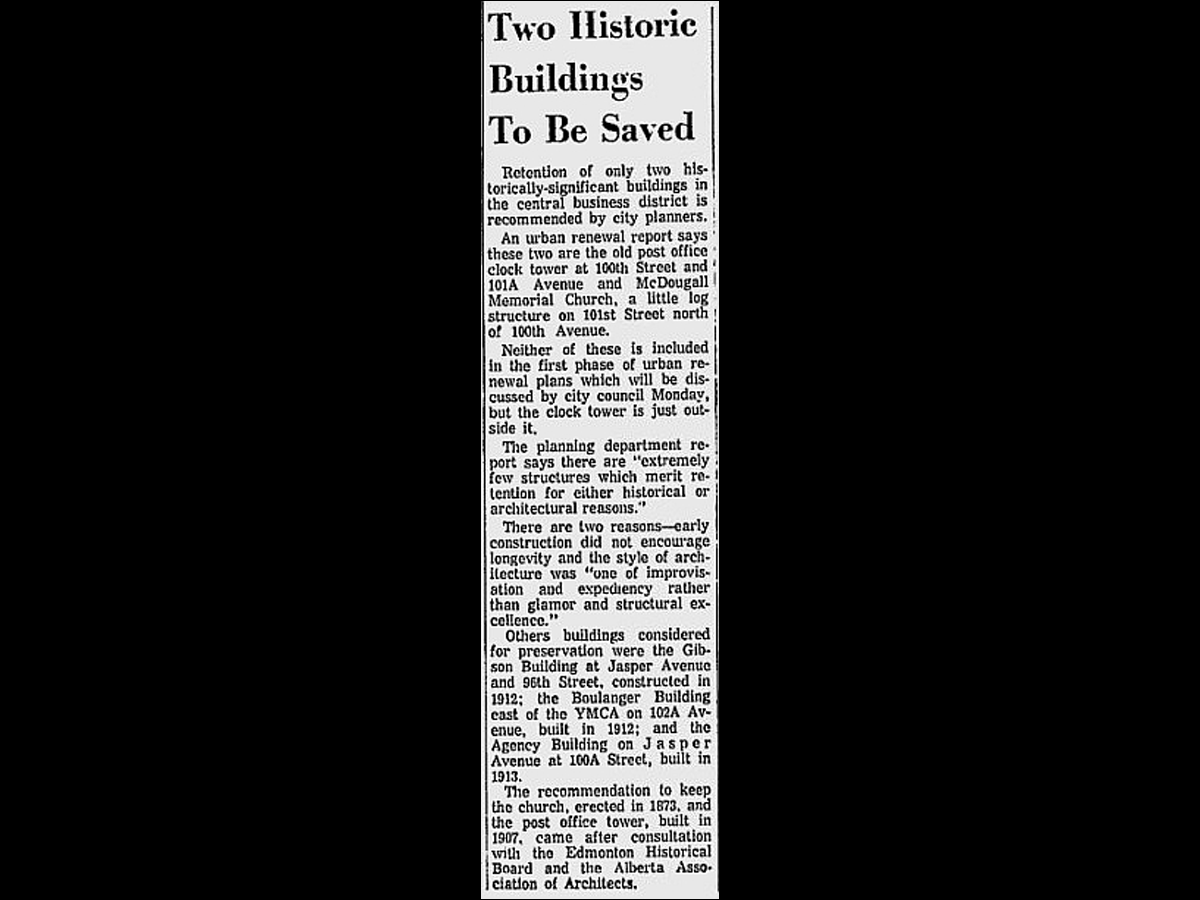 On this day in 1967, the McDougall Memorial Church was deemed one of downtown's rare historic buildings worth protecting.

In the mid-1960s, Edmonton was in the grip of a feverish urban renewal plan. A booming oil industry and growing population were transforming the city, while politicians and planners were eager to replace downtown's "rabbit warrens" of urban "blight" with gleaming skyscrapers. In that spirit, the city's urban renewal report suggested there were "extremely few structures which merit retention for either historical or architectural reasons." The two worth saving? The clock tower from Edmonton's 1907 post office and the original McDougall Church from 1873.

When Rev. George McDougall came to the region in 1862, he and his family settled on River Lot 1, overlooking what is now Bellamy Hill. There, he built a Protestant church out of local lumber —— the first settler building constructed beyond the walls of Fort Edmonton.

The church might have been one of the first buildings in the new settlement, but it would soon have many neighbours. Edmonton's population grew rapidly, and the tiny timber church was soon no match for its swelling congregation. A new wooden church was built in 1892, and the original structure was turned into a dormitory and moved a few blocks further west.

The second church was used for just shy of 20 years before it too was replaced by a larger house of worship. Then, in 1908, construction started on a third church, this time built out of red brick and stone and touted before its completion as "one of the finest buildings of its kind in western Canada." The new McDougall Church was finished in 1910. It was rechristened as McDougall United in 1925 when Methodists, Congregationalists, and Presbyterians joined under the United Church of Canada banner. And it still stands today, protected as a historical resource in its own right.

The original building was moved again in the 1940s to a spot beside the new church, where it served as a museum for the coming decades. Finally, in 1978, it was moved to a permanent home in Fort Edmonton Park, where it offers a glimpse of the city's earliest days.

While the 1910 McDougall church has remained in the same location, unlike its predecessor, it is still changing. It is undergoing a $15-million restoration project that will transform it into a multi-faith community hub with housing spaces. Earlier this year, McDougall began hosting Muslim prayer services during Ramadan.