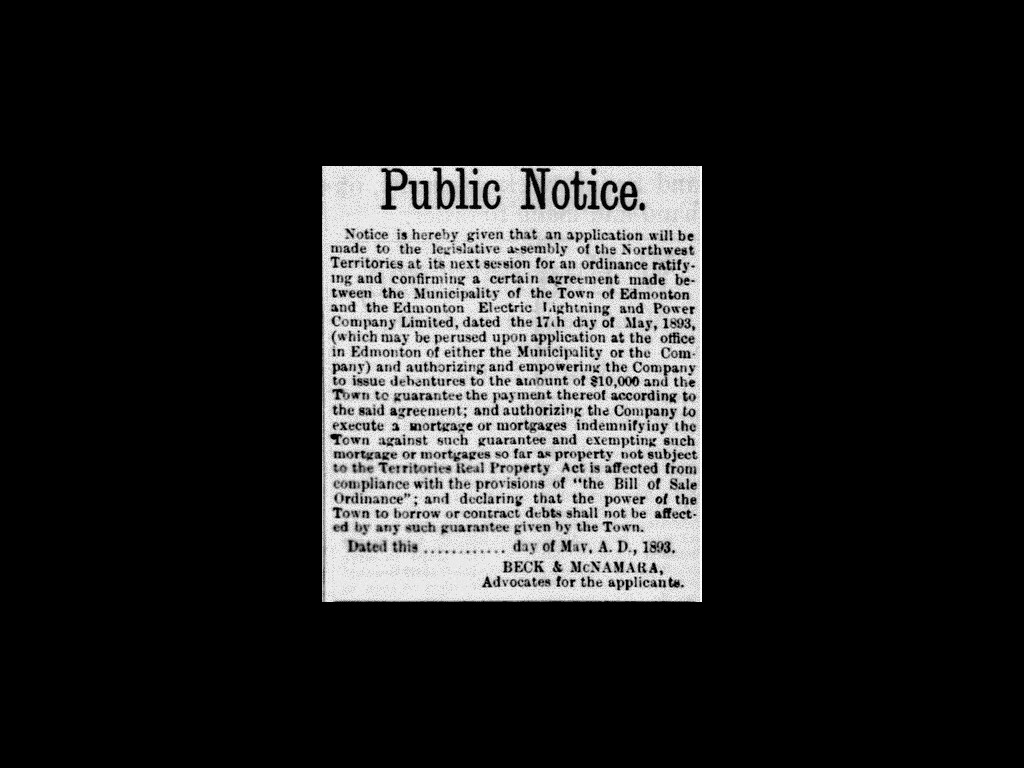 On this day in 1893, the Edmonton Electric Lighting and Power Company was looking to issue debentures to raise some cash.

The company was still relatively new; it had been founded only two years before by a handful of local business owners with the promise of bringing electricity to the young town. The company built a coal-fired power plant on the river bank and put up street lights down seven blocks of Jasper Avenue. For the first time, Edmonton's main street had electric lighting ... sometimes. The lights were generally on for only a few hours each night.

For the next few years, the fledgling company would have to contend with two major challenges: a growing population and a rising river. The power company had trouble keeping up with the demand for more juice as the town grew. On top of that, floods in both 1899 and 1900 damaged the plant, leaving Edmontonians without power for weeks.

The company started constructing the Rossdale Power Plant further up the bank in 1902 to help address the issues. But by that time, residents were not satisfied with the services offered by the company. That gave a mandate to the town government to buy the Edmonton Electric Light and Power Company, including the power plant and its equipment. It became the first municipally owned electric company in Canada. In 1905, the city started offering around-the-clock power service to 53 customers.

Since then, the city's power company has gone under a few names: the Edmonton Light Department and Edmonton Power among them. In 1996, the city merged its electricity, water, and natural gas operations into one entity: EPCOR. While the city remains EPCOR's only shareholder, the corporation also does business in other parts of Alberta, as well as in Ontario, B.C., Arizona, and Texas. In 2009, the power-generating side of EPCOR was split off into a publicly traded company called Capital Power

Since the split, EPCOR has returned to some power generation, such as the company's 51-acre solar farm that is set to open soon in the Edmonton river valley. The project has been a controversial one: the company has said it will lead to a significant reduction in greenhouse gas emissions, but concerns remain over the large project's impact on the local environment and wildlife. And as a publicly owned company, at least one Edmonton city councillor has raised concerns over the salaries paid to EPCOR's leadership.