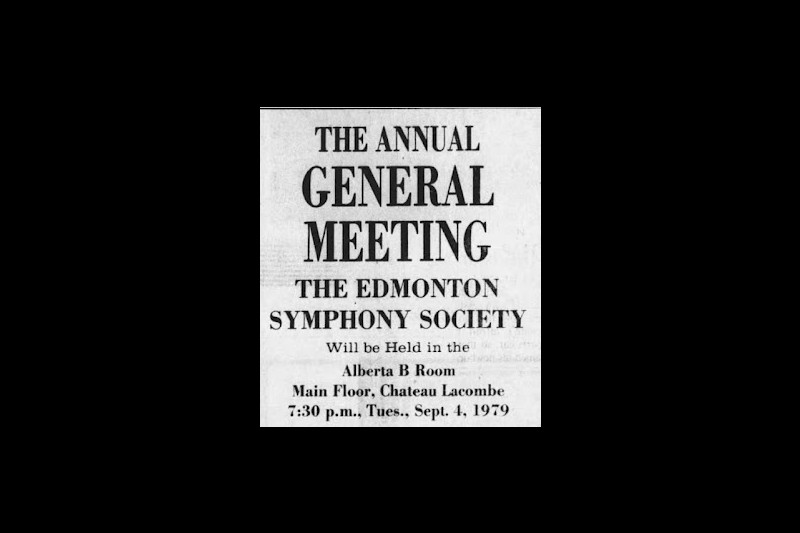 On this day in 1979, the Edmonton Symphony Society was preparing for an annual general meeting in its 27th year, continuing a history of orchestral music in Edmonton that dates back much farther.

While smaller groups played in Edmonton's earlier years, November 1920 saw the first group to perform under the banner of the Edmonton Symphony Orchestra — 52 amateur musicians assembled at the grand Pantages Theatre downtown. The orchestra proved popular, and that first performance soon grew into fairly regular concerts, primarily held at the Empire Theatre.

The music continued to be a draw for the next 12 years, but the Great Depression took its toll, and the group disbanded in 1932 due to a lack of funds. Over the years, there were attempts to get the music playing again: The Edmonton Philharmonic Orchestra was founded in 1941, and in 1947, the city government pulled together the Edmonton Pops Orchestra.

Five years later, Marion Mills held the first meeting to discuss the merging of the two groups. The Edmonton Symphony Society was founded, with Mills as its first president. The modern ESO was born and held its first concert on Nov. 30, 1952, at the Capitol Theatre, conducted by Lee Hepner.

In those early years, the ESO frequently moved, even finding a home at Victoria Composite High School for a spell. Then, in 1957, it found a more permanent place at the Northern Alberta Jubilee Auditorium, where it would stay for the next 40 years. In 1997, the ESO moved into its current home at the Francis Winspear Centre for Music.

While obviously based in Edmonton, the ESO has also reached ears beyond the city limits. Seven years after its founding, it became the first orchestra to play in the Northwest Territories, and it would tour Yellowknife, Inuvik, and Whitehorse decades later. In 2012, it played outside of Canada for the first time with a performance at Carnegie Hall. Aside from live performances, recordings of the ESO have reached massive audiences. The 1972 live album of ESO's collaboration with English rockers Procol Harum went platinum internationally. And the orchestra won a Gemini for its 1992 performance with k.d. lang, conducted by Tommy Banks.

The orchestra has been sure to take advantage of the beautiful, if brief, summer months in Edmonton with an ongoing series of outdoor performances throughout August, leading up to the return of its annual Symphony Under the Sky during the Labour Day weekend.