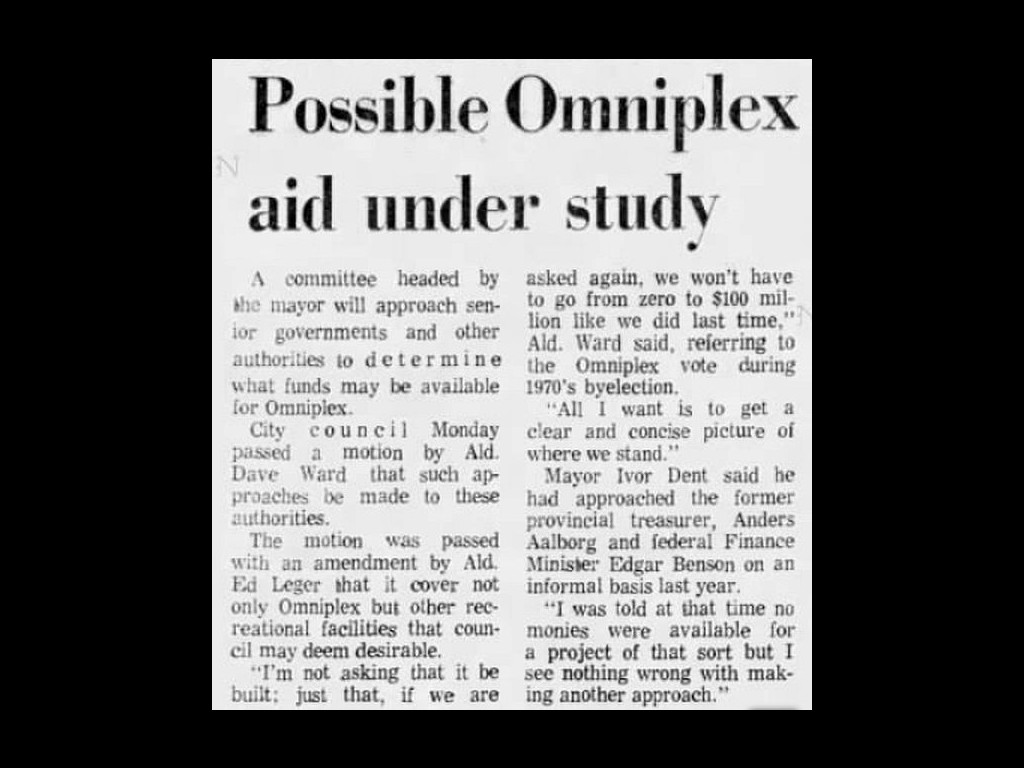 On this day in 1971, a committee was pursuing a last-ditch effort to find funding to build the proposed Omniplex.

Of all the audacious projects of the version of Edmonton that almost was, the Omniplex looms largest. Literally. In the 1960s and early 1970s, the oil boom led to ambitious proposals, supported with arguments that would be very familiar to present-day Edmontonians; the Omniplex was one such "world-class" idea to revitalize downtown and fight "urban blight".

It was pitched as a Swiss-Army knife of a venue that would serve as the city's entertainment and cultural heart. It would be an air-conditioned, 32,000-seat stadium for Edmonton's CFL team. It would be a convention centre with shopping, lecture halls, theatres, and luxury dining. Not to mention an arena that would hopefully draw an NHL team to the city. And it would all be serviced by an underground LRT station (for an LRT system that didn't yet exist).

The designs floated for the building mirror the breathless excitement of its supporters. The plan was to build it on 97th Street on a stretch of land now occupied by the old Remand Centre, the Brownlee building, and police headquarters. There were a handful of proposed designs — one imagined an ice rink covered in removable AstroTurf for football. Another suggested mechanically moved seats that would offer different views based on the sport being played.

But the best-known and most ambitious design was the Marlboro Plan. The outside would have a circular glass wall accompanied by concrete pillars, which would use cables to support a steel dome roof. Inside, the football field would be built to be raised into the air and suspended near the ceiling, revealing the ice rink below.

The idea of the Omniplex was popular — in a 1968 plebiscite, around 70% of voters supported the idea. Less popular, however, was the idea of paying for it. Official estimates put the cost at around $30 million (about $225M in 2022 dollars), not including the need for parking and other costs. Critics warned the actual cost could be much higher, perhaps even closer to $100 million. There were other problems with the proposal. The NHL cautioned that the design might not meet their standards for an arena, which could jeopardize Edmonton's hopes of getting a team.

In the end, the Omniplex dream effectively died in 1970, when a close plebiscite vote rejected the idea of Edmonton spending $26 million on the idea. Some attempts were made to find the money elsewhere, such as the committee mentioned above. But nothing came of it. Eventually, Edmonton would build a new football stadium, an NHL arena, and a convention centre. But they wouldn't be housed under the same steel dome.

The city might have been flush with cash during the oil boom 70 years ago, but the situation is quite different today. The upcoming municipal budget discussion promises to be tough for city council, and the discussion these days is less about pumping cash into ostentatious Omniplexes and more about closing existing recreational centres to save money.