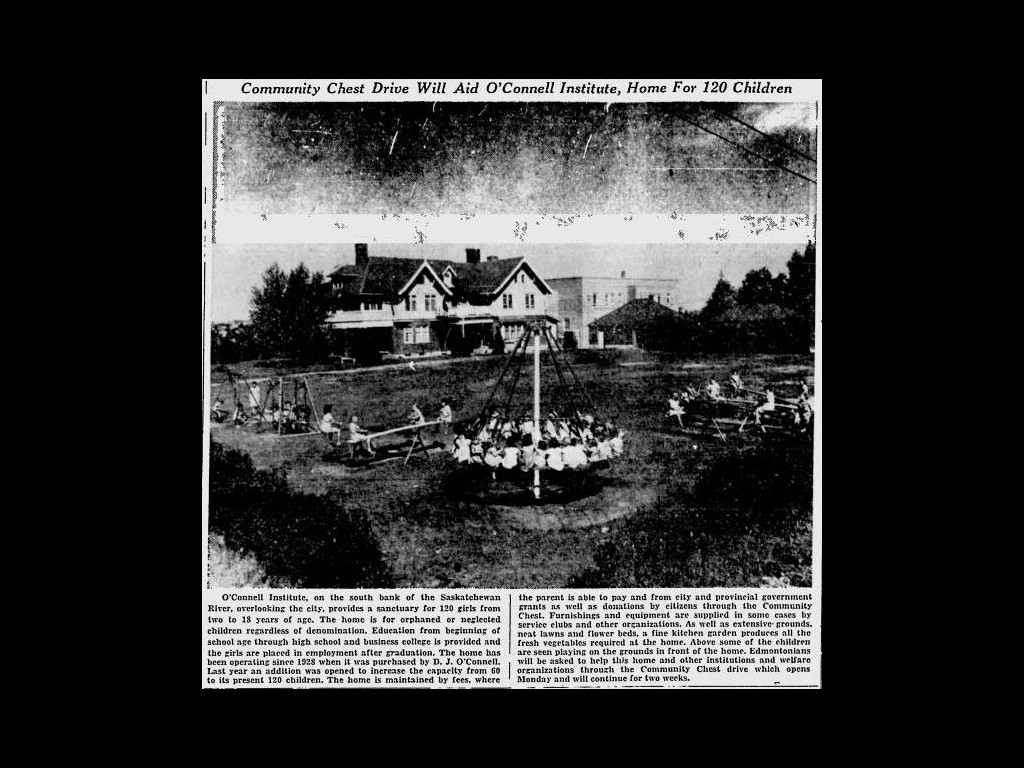 On this day in 1949, funds were being raised to support Edmonton's O'Connell Institute, in a campaign that painted it in much more positive terms than many of its inhabitants experienced.

The institute was one of the many organizations supported by Edmonton's Community Chest, a fund started in 1941 to support social agencies in the city. The newspaper photo of the institution described it as a "sanctuary" for "orphaned or neglected children," showing an idyllic scene of young girls on a playground beside the well-kept building. However, many of those who stayed at the O'Connell Institute carry memories of abuse and trauma from their time living there.

The O'Connell Institute — later known as the Mapleridge Residential Treatment Centre for Girls — began in 1929. The Forest Hills mansion, built on the southern bank of the North Saskatchewan, was purchased for $25,000 by well-known philanthropist James Daniel O'Connell. He donated the building to Edmonton's Roman Catholic archdiocese, where it was turned into an orphanage to be run by the nuns from the Sisters of Our Lady of Charity.

While originally set up as an orphanage, the O'Connell Institute would also house children considered "neglected" by the government, including many Indigenous kids who were separated from their parents. It's hard to tell how many young girls spent time at the institution over the years. Official sources put the building's capacity at either 90 or 120 occupants over the years, with personal accounts going as high as 200 at a time.

While the orphanage often portrayed itself as a safe place for girls with no other home, many survivors of the institution tell stories of racism, sexual abuse, and harsh punishments. During Pope Francis's visit to apologize for the church's role in residential schools, Sherry Mitchell told Global News about her mother's time at the orphanage. The girl had been dropped off by her young Métis mother, who asked the nuns to care for the baby until she could raise the child herself. When Mitchell's grandmother returned, feeling able to care for her daughter, she was told the girl was no longer there and had potentially died. In fact, Mitchell's mother was still at O'Connell, where she would spend the next 16 years being told she had been "thrown away" by her mother.

Survivors have described O'Connell as more of a prison than a sanctuary. They talk about being separated from their parents and spending years locked in the building for minor infractions such as skipping school. Beatings and choking were often used as punishments, as was a form of solitary confinement. Elder Taz Bouchier, who spent a year there in the 1970s when it was known as Mapleridge, said escape attempts were common, as were brutal punishments after the girls were recaptured.

There have been some attempts to shine a light on the abuses that happened at the O'Connell Institute. In 1998, three Métis sisters who were taken from their parents and dropped off at the orphanage sued the Alberta government and three nuns. Their suit alleged humiliation, physical beatings, and forced starvation. However, the traumatic history of the institution still remains largely unexamined.

Some futile attempts were made to get O'Connell/Mapleridge recognized as part of the federal government's Residential Schools Settlement Agreement. While the institution is now closed, the building still remains, as does the trauma of those who faced abuse within its walls. This week, the National Day for Truth and Reconciliation recognizes the shameful history of Canada's residential schools program as well as the lasting impacts it has left on the survivors and their families.