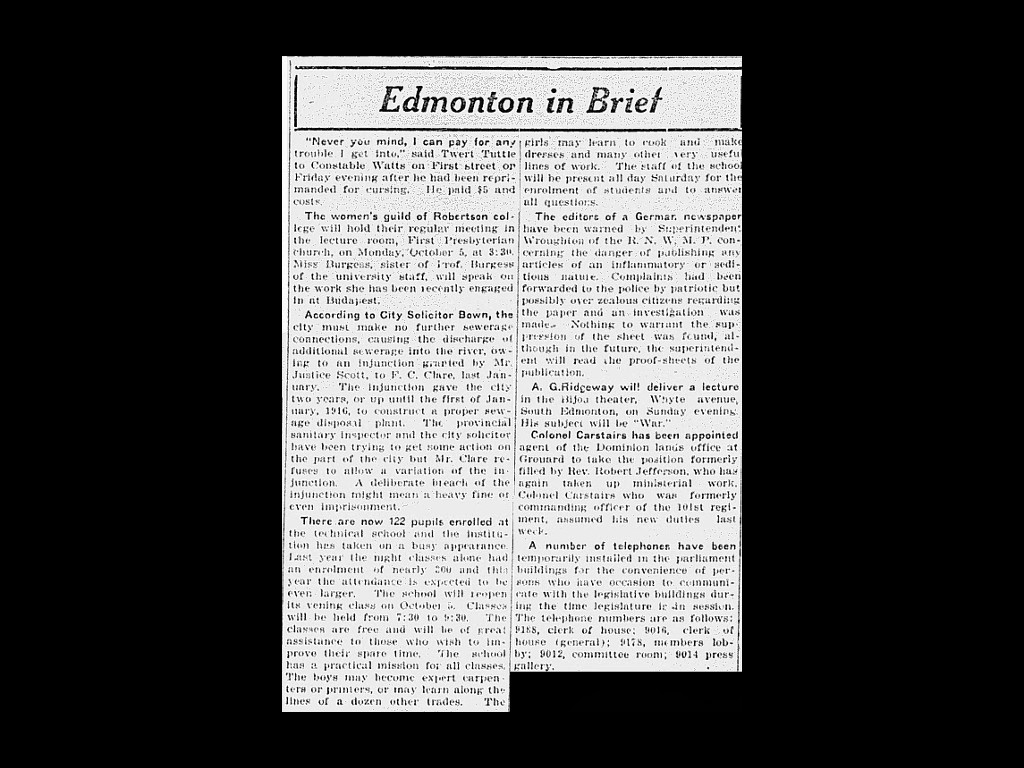 On this day in 1914, the City of Edmonton was under a court order to clean up its act when it came to dumping sewage into the North Saskatchewan River.

The injunction had been handed down by a justice that January and meant, according to the city's lawyer, that Edmonton would have to halt building any new sewer connections that put additional waste into the river. It also gave the city two years "to construct a proper disposal plant," according to a short item published in an Edmonton newspaper. The story indicates that both the province and the city tried to get the injunction softened, to no avail.

Edmonton did have a water treatment plant — it had been built in 1903 in Rossdale, right beside the city's power plant. However, when it was built, the city's population was about 7,000 people (and not all of them were connected to the sewer system.) A decade later, the city had grown tenfold. So the little 1903 plant presumably had trouble keeping up.

Population wasn't the only issue. By the 1910s, citizens expected better water service, including bathtubs and indoor toilets, although they had to pay extra for the water for those amenities, to the tune of $8 a year. As a result, a new pump house was built sometime in 1913 or 1914, relieving some of the pressure from so many people relieving themselves.

The city's population growth slowed significantly in the interwar period, and it wasn't until 1941 that a new water treatment plant was built at Rossdale to provide for the city, both to increase capacity and take advantage of new technology.

In 1956, the city opened its first secondary treatment plant at Gold Bar. While primary water treatment uses settling tanks to separate solids, secondary treatment uses filtration and other methods to further purify the water. It was designed to handle about 250,000 people when it was first opened. Now, after decades of upgrades and expansion, it handles water treatment for about 900,000. The E.L. Smith Water Treatment Plant was built in 1978 in southwest Edmonton and saw renovations in 2008.

The science behind water treatment continues to advance; Edmonton's plants now use various methods to clean the water — everything from activated carbon to chemicals to filtration. In 2002, Edmonton became the first major Canadian city to use UV-ray sterilization to destroy bacteria in its water. Upgrades at the Gold Bar plant in 2018 allowed it to turn some of the waste removed from water into agricultural fertilizer. And in August, EPCOR announced plans to continue with a delayed project to add orthophosphate to the city's water early next year to prevent old pipes from leeching lead into the system.