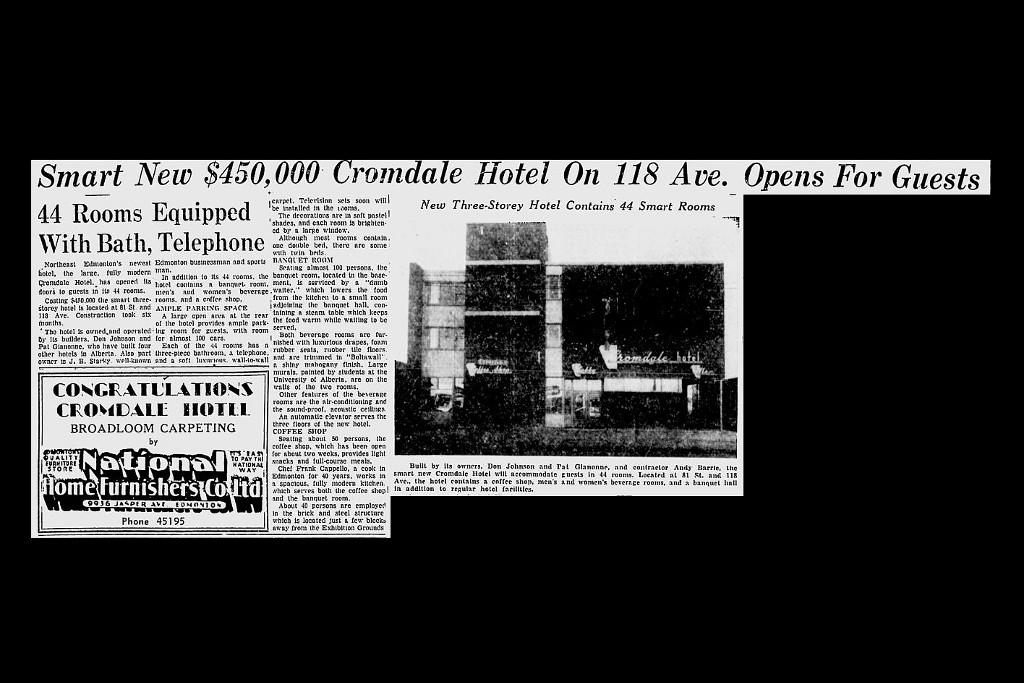 On this day in 1954, the Cromdale Hotel opened its doors.

While the hotel would get a notorious reputation in later years, the Cromdale's opening was welcomed with great excitement. The "fully modern Cromdale Hotel" offered 44 rooms equipped with baths, telephones, and "soft luxurious wall-to-wall carpet," the Edmonton Journal gushed. The three-storey structure also housed a banquet hall, men's and women's beverage rooms (each decorated by a mural painted by a pair of University of Alberta students), and a coffee shop.

The Edmonton Gardens was the city's arena and main concert venue at the time. Alberta Avenue (as it is now called) was lined with nightclubs, cafés, and other establishments catering to those looking for a night out. Located at 81 Street and 118 Avenue, the Cromdale soon became a cornerstone of that vibrant nightlife. In the 1960s, the Cromdale's business was booming, mostly thanks to beer sales, leading the hotel to build an expansion.

The good times did not last forever. While business at the hotel remained strong, the '70s marked the start of a decades-long decline for both the Cromdale and the surrounding area. The working-class residents who had made up most of the neighbourhood were moving to the suburbs, leaving many homes and buildings abandoned. Long-established businesses were replaced by empty storefronts and pawnshops. During that time, the Cromdale remained a favourite drinking spot for students, as Grant MacEwan College had a campus only a block away.

By the '80s, the once-vaunted Cromdale Hotel had a new reputation as a hotspot for substance abuse and violence. Brawls and assaults seemed to be a daily occurrence, and deaths at the hotel were all too common. Some problems spilled out into the surrounding area, prompting a decades-long battle to shut down the hotel.

Those fighting for the Cromdale's closure would have to wait for the next millennium to get their wish. In 2004, Capital Health closed the hotel down after a failed health inspection. But the influence of the Cromdale would continue, as it would sit derelict for another eight years. The hotel's demolition in 2012 is seen as a major step in the efforts to revitalize Alberta Avenue.

It's an effort that still continues to this day, driven mostly by a dedicated group of residents, volunteers, and organizers. Events like September's Kaleido Family Arts Festival are bringing back some of the energy that infused the area back in the Cromdale's heyday. While great progress has been made over recent decades, problems still remain. Earlier this year, Alberta Avenue residents called for action on derelict buildings, and city council put some money toward the problem after seeing a report calculating the costs of problem properties.