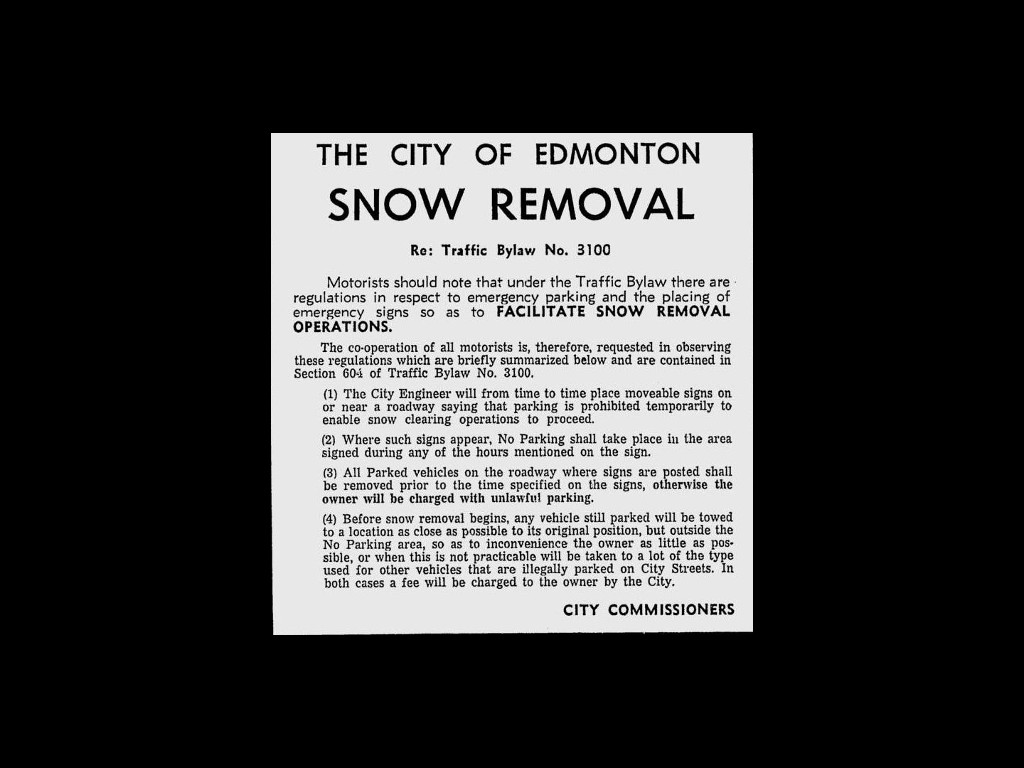 On this day in 1968, the city was issuing a perennial warning to Edmonton drivers about parking restrictions due to snow removal.

Edmonton's winters are infamous, and the struggle against the annual cold and snow has been ongoing since long before the city's founding. When European settlers first came to the area, they were generally unprepared for the winter weather they would face. Cold-weather clothing was largely a mix of local wool, hide, and fur. Many early settlers owe their survival to lessons learned over the centuries by Indigenous people living in the area.

As Edmonton grew and expanded over the decades, keeping city streets navigable by both cars and pedestrians became a daunting task. The city is in a fairly dry climate and will see an average of about 125 cm of snow each year. But there have been a few big exceptions in the city's history: the largest recorded snowfall in Edmonton's history was 287 cm — a metre-and-a-half more than usual.

A few years after that, in November 1942, the biggest snowstorm in the city's history would hit Edmonton. Over two days, 50 cm of snow dropped on the city, burying vehicles and cutting off whole neighbourhoods. Streetcars halted, food deliveries were cancelled, and some Edmontonians even resorted to skis to travel along Jasper Avenue.

The situation was made all the more difficult because Edmonton, like many prairie cities, had no municipal snowplows at the time. It was the United States Army, which had troops and equipment nearby to construct the Alaska Highway, that eventually got the city's roads clear of snow. (The city has since acquired several plows — you can even name one.)

Snow, and how well the city does at removing it, remains a constant issue in Edmonton. The past 20 years in particular have seen several changes in how much snow the city removes, what substances it applies to the streets, and how it deals with windrows. City council added $4.7 million to this season's snow removal budget, and it's still hard to keep up given the area that needs clearing. And in case you missed it, a winter parking ban is in effect to deal with the current dump of snow.